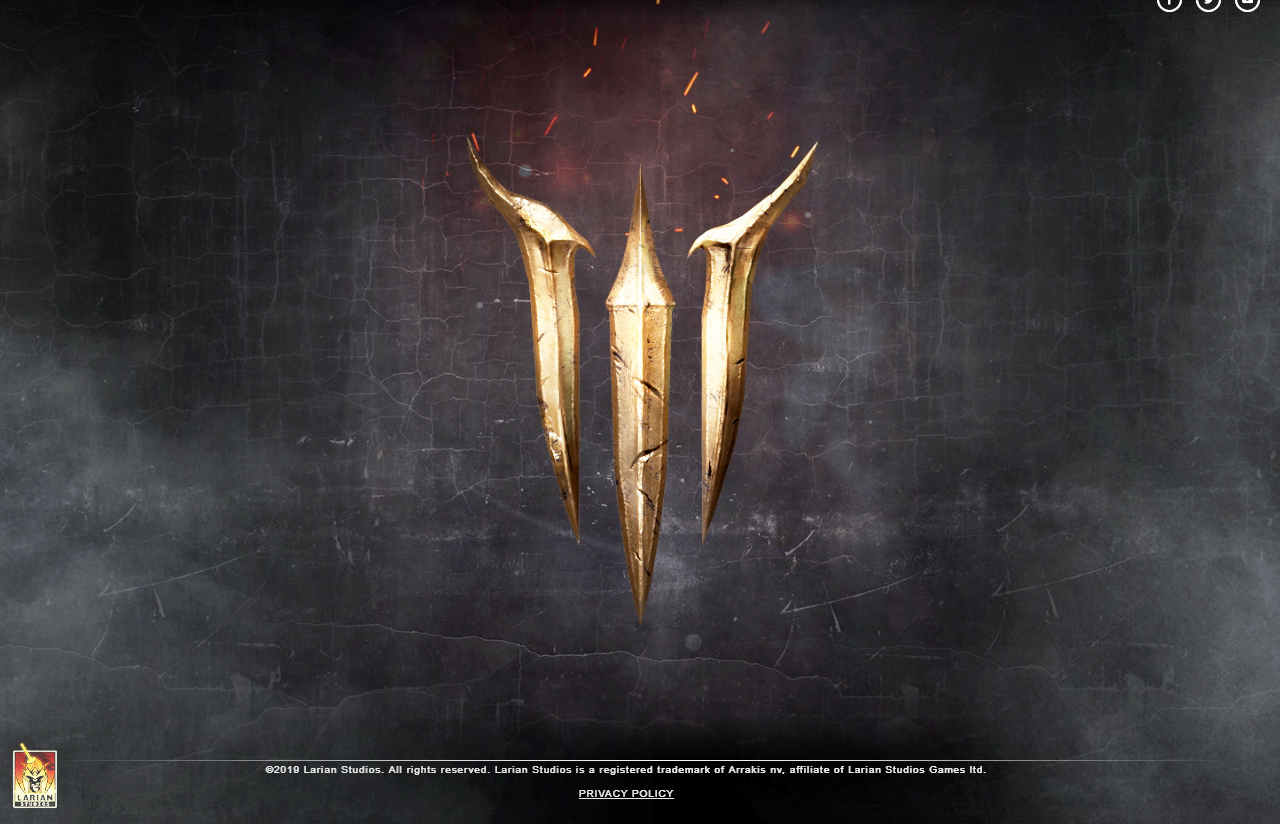 I've said hell yeah so many times today and if the awesome news keep coming I will keep saying it!

Amazing! I've wanted larian to have the D&D license ever since they streamed that DM'd module before DOS2 came out.

Hopefully it's turn based or at least has that option... And I want it to be a new game with a new protagonist. Sure, connect it to the original, but it needs to be accessible to new players.
Last edited: May 30, 2019
Reactions: lashman

Derrick01 said:
Bloodlines 2 and Baldur's Gate 3 in the same year. I just...wtf is happening?
Click to expand...

the year of dreams
Reactions: QFNS

I was about to take a dump on this, but Larian does Divinity: Original Sin?

Yeah, they're probably the only company right now that could do Baldur's Gate III justice outside of CDPR, who is knee-deep in Cyberpunk.
Reactions: lashman and prudis

Phoenix RISING said:
they're probably the only company right now that could do Baldur's Gate III justice
Click to expand...

This is big for me. I like the Forgotten Realms world and I will happily return.
Being a Larian game doubles the pleasure.
Great, great news!
Reactions: lashman and BlindRhythm

m_dorian said:
This is big for me. I like the Forgotten Realms world and I will happily return.
Being a Larian game doubles the pleasure.
Great, great news!
Click to expand...

Yeah exactly how I feel! This might be my most wanted game if is true. Could only be topped if they then later made Neverwinter Nights 3 too.
Reactions: BlindRhythm and m_dorian

This is pretty incredible. I trust Larian Studios to do this well.
Reactions: BlindRhythm and m_dorian

jschreier
Press Sneak Fuck
In case there was any doubt, a lot of people are privately confirming to me secondhand/obliquely that this is for real."
Reactions: Stevey, prudis and lashman

I am excite.
Reactions: BlindRhythm

E3 is going to be insane this year.
Reactions: prudis

Put your faith in Blast Hardcheese

I promised I would buy whatever games Larian would make, so this gives me a good reason to play the Baldur's Gate games.
Reactions: BlindRhythm, Francis W.M., Stevey and 1 other person

Wait, what? How does that even work from a plot point of view?

A lot has changed in the Forgotten Realms in the past 20 years... including a second Sundering event where gods died.

Doesn't necessarily have to be the same MC, just the same setting.

i don't think we even need any more confirmation

(especially since he deleted the tweet right after posting it )
Reactions: Minerva and m_dorian

Knowing that it's Larian, I guess controller support (and console ports) are also possible?
Reactions: lashman


texhnolyze said:
Knowing that it's Larian, I guess controller support (and console ports) are also possible?
Click to expand...

i'd say it's a given at this point
OP

And thus the RtwP vs. Turn-based eternal debate will spark once again.
Reactions: Swenhir, Minerva, BlindRhythm and 2 others

And thus the RtwP vs. Turn-based eternal debate will spark once again.
Click to expand...

But yeah, It would be the best path to take and I hope they do somehow include both.
Reactions: Minerva, m_dorian and lashman

Because there's only room for one in Baldur's Gate, and that is RtwP.

m_dorian said:
This is big for me. I like the Forgotten Realms world and I will happily return.
Being a Larian game doubles the pleasure.
Great, great news!
Click to expand...

I know nothing about the current Forgotten Realms, but I loved it back in the 90s when I was a kid. I used to play PnP and read all of the terrible novels and played the goldbox games. From what I've heard, it's very different now but I'm sure I'd recognize places and gods and such. Good memories
Reactions: m_dorian and BlindRhythm

I have to take a few weeks of vacation when that launches!

I've taken part in three lengthy conversations defending the merits of RTwP combat today, and I generally prefer (good) TB.. What am I doing?
Reactions: ISee

When Larian demoed their DM mode at WoTC, all I could think about was how badly I want them to make a NWN-style game(ie: a game where you can make your own modules/campaigns for D&D). I really hope this is a step in that direction.

Dandy said:
When Larian demoed their DM mode at WoTC, all I could think about was how badly I want them to make a NWN-style game(ie: a game where you can make your own modules/campaigns for D&D). I really hope this is a step in that direction.
Click to expand...

Yeah! I miss NWN so much that I've been thinking about playing around with the toolkit in the new version. But having a new game with a toolkit again would be so sweet!

I've taken part in three lengthy conversations defending the merits of RTwP combat today, and I generally prefer (good) TB.. What am I doing?
Click to expand...

You're starting to realize the truth,
Accept it. Join us. Resistance is futile.
Reactions: QFNS, Swenhir, Kvik and 3 others

The perfect Devs for the job.
How's their stance on EGS?
I really need to know before I can start celebrating.

I have very little optimism that this would end up RTwP, so I'm just hoping the underlying game systems are as appealing to me as possible. I get why everyone loves the turn-based combat of D:OS2, but I found myself much less invested/engaged with the minutiae of character builds/specs than I was in the original Infinity Engine games and the Pillars games. The faster pace of RTwP really lends itself to the sort of immediate layering of spells and abilities, especially for multi-class builds, that take multiple turns to set up in TB games and thus lose a lot of their appeal and impact. I'm definitely interested in seeing how their version of 5e rules ends up playing out.
Reactions: Gizmo

Every eight seconds is a "turn" in Baldur's Gate, even though the action looks real-time.

They must have gone full-FFT style for Divinity 2. .
Reactions: Kvik

Would be funny if it were Divinity 3, LOL

Phoenix RISING said:
Would be funny if it were Divinity 3, LOL
Click to expand...

at this point - i'd be VERY surprised if it was
Reactions: Phoenix RISING

Well those could be voidspawn tentacles!
Reactions: Kvik

Mind Flayers have tentacles, and BG2 had more than it's share of those.
Reactions: lashman

Durante said:
You're starting to realize the truth,
Accept it. Join us. Resistance is futile.
Click to expand...

Let's not go that far. I just think RTwP gets a lot of undeserved hate. Most of the complaints I read involve issues with the controls, micro-management, and viewing pausing itself as a problem. These aren't anymore a (design) problem than they are in an RTS. There are however differences in goals, potential character actions, and encounter variables, which is why you can pause.

This going be an awesome Stadia game!!!

I wouldn't mind if this was turn based like proper D&D like Temple of Elemental Evil. As long as it doesn't slow the pacing too much (I like turn based but find it a problem in games like Wizardry 8 where you can have 8 characters of your own and multiple enemy parties of equal or larger size all around you engaged in combat and even distant parties that have yet to spot you performing their regular move turns on top, I wish there was a mod for that game to somehow overhaul the balancing with smaller parties). But Larian have proved themselves so I doubt they'd make that mistake with the game.

But I do love RTWP so hopefully they would do RTWP as good as they did turn based and elevate it to new heights rather than make a flawed gem of it.

Larian might be the only dev i'd trust baldurs gate 3 to
Reactions: Spamlynguist, Phoenix RISING and m_dorian

Between Bioware and Larian the choice is rather obvious.


We trust our Canadian overlords! Right?

Alexandros said:
Modern Bioware attempting to make a cRPG would be absolutely hilarious.
Click to expand...

I would love to see them try! As much as I liked DA inquisition it would be quite awesome if DA3 went back to its roots.

Speaking or Larian and BG3, one issues with DOS games is that the cities are quite small, not sure if it's an engine issue and with BG I would hope there are big cities to explore.
Reactions: Dandy
184 More Posts...
You must log in or register to reply here.
Share:
Vk Ok Blogger Linked In Diaspora Weibo Facebook Twitter Reddit Telegram Viber Skype Email Google Yahoo Evernote Xing Link