Wok said:
Otherwise, I would look for shops near Sorbonne, because students have to print their university thesis somewhere.
Click to expand...

I assume most universities would have their own in-house printing facilities; at least mine did, and handled my PhD thesis as a matter of course without me spending a cent. (edit: It may have been taken on some project's budget or something... I don't remember...)

I don't recall how it was for master's and internship reports (which are much simpler/smaller print jobs anyway), but the idea of students having to hunt for shops and pay out of pocket for non-trivial printing required by a university course / diploma strikes me as wrong, even possibly against regulations. Where I am now, I'm quite sure we print students' reports if requested to do so (though some may find it simpler to print themselves).

So it's not clear to me that "proximity of university" implies "printing shops open to the public". And If Le Pertti needs this as part of a course (in a public établissement d'enseignement supérieur), the first step is to ask the ones responsible if they can handle the printing.
Last edited: Jul 6, 2021
OP

Wok Thanks! Will check them.

Gamall Wednesday Ida We do have printing in our school, but only black and white, but they want two Color copies of both "Rapport du Projet" and "Dossier Professional". Thats 100 pages combined..:S

Hmm, yeah, as Gamall Wednesday Ida said, it stands to logic to ask the person asking for it, or at least the printing dept.
I'm super sorry I can't be of any help, I never printed things outside my home.
Reactions: Le Pertti

It's lunchtime right now in France; when the service reprographie re-opens here, I'll have a quick chat with them and ask if my intuition that there are legal guidelines for expensive printing jobs asked of students holds any water at all.
____
A quick chat later:

My current school has local policies in place (6 PhD theses / candidate + a 10€/year printing budget per student, that covers all we ask of them, as well as some private printing tasks if they so wish).

However, though the person I talked to does not know the legal context, her general impression is that there is no overarching legal framework, but purely per-establishment policies. I had assumed there was because 1° it seems right, and 2° all places I've been have had similar policies.

So beyond advising you to diplomatically protest the colour requirement (is it really a demand ? What's the rationale for it ?) and point out to whoever will listen that you're not made of gold, I'm afraid I can be of no help.
Reason: the "auto-merge post with previous one" feature of this board is buggy as all hell.
Last edited: Jul 6, 2021
Reactions: lashman, Li Kao and Le Pertti

Gamall Wednesday Ida said:
beyond advising you to [...], I'm afraid I can be of no help.
Click to expand...

I am sure your investigation has already been a ton of help. It is an interesting issue which you raised: how much can teachers ask from their students to pay from their own pockets for printing, etc.? In a work environment, these expenses would have to be covered by the company.
Reactions: Gamall Wednesday Ida and Li Kao
OP

Went to a printing service near Sorbonne and they were great, I got everything printed on nice paper and in colour for only 30€! Thats like half of what other places were charging. Downside is I have turn in loose pages in plastic pockets haha
Reactions: lashman
OP

Since everyone is complaining about monopoly, so what’s up with cafe Richard being the only coffee one can find in paris?!?XD
Reactions: Wok
OP

Since the Parisian summer was so cold and wet this year, the result is that there are so many mosquitos ! Feels like being back in northern Sweden. I live on the third floor and didn't think they could even fly this high!
Reactions: Li Kao and Wok
OP

Casino has some crazy deals going on, every time I shop there I get a discount code for the next time and its always 30% off and that's super good! Usually its like buy for 20€ and get 6€ or 50€ and get 15€ off. It has come to the point where I buy stuff I don't need or should buy, like today bought a 4 pack expensive ginger ale! And I don't , shouldn't , can't drink soda!
Reactions: Wok

One day I'll go and visit France. My ex boss is married to a French citizen, maybe I'll ask him for tips the next time I see him

Edit: about the country not about the marriage lmao
Reactions: Wok
OP

NarohDethan Do it! I fell so much in love with the country in my first visit so I moved here permanently.
Reactions: NarohDethan

Le Pertti said:
NarohDethan Do it! I fell so much in love with the country in my first visit so I moved here permanently.
Click to expand...

I have seriously bought groceries from Casino now for 150€ and only paid 100€! I have so much food there is no more room to store everything!XD
OP

It took a few years but I finally found a cafe with an excellent espresso!

Yeah and the heating in my apartment doesn't work!

Hey French people! Which bank is good? Thinking about finally changing bank from the online bank I have now to a real one. I have Nickel now and it works just fine but still feel like I should have a real one if I want to build a real life here in France.

Hey, I have a question for the more bilingual inclined Frenchies here. How would you say that someone / something is 'bourrin' in English ? Never found a satisfying answer when I googled it some years back.
A mindless ox ? An ox ? Would the meaning jump at an English speaking person ?
OP

Yeah where have all the other French people disappeared to? For example Wok hasn't been active that much!
Reactions: Li Kao

The first song in French I listened to.
Reactions: Le Pertti and Li Kao
OP

This year, I really would love to have some real buche de noel! How do I know how to get something that is good?

Speaking of France, I also like this song. Great game as well.

I was reading the lyrics for that song and noticed this

when put on google translator the d in d'mal seems to be pronounced with pas, or so I kind of hear? is this correct? I head "pa'd mal"
OP

NarohDethan said:
I was reading the lyrics for that song and noticed this

when put on google translator the d in d'mal seems to be pronounced with pas, or so I kind of hear? is this correct? I head "pa'd mal"
Click to expand...

Yeah the S is silent in pas. Consonants are usually silent at the end of a word. Took me way too long to learn that.
Reactions: NarohDethan
OP

Bought a big Gallette de Roi today and its so good! Im going to be so fat!

Le Pertti said:
Bought a big Gallette de Roi today and its so good! Im going to be so fat!
Click to expand...

Li Kao whats happening over at micromania? When I go on their site there is a huge yellow wall of text.

Looks like they took a little too much inspiration from Papa Gamestop with their shit practices and added guarantees. Mama Justice told them to stop being misleading.
Reactions: Le Pertti
OP

Guys, I'm a bit worried about the success Le Pen is having!
Reactions: NarohDethan and lashman

Like I said elsewhere, I'm not too worried about this election. A good amount of people, like me, hate Macron, but at the end of the day they know the choice they have to make. Right wing shithead or far right trash. It worked five years ago. It should work again now, even if the trick is getting tired and there is a very real risk that one day people are gonna forget their sense and, by inaction, pave the way for the worst.

Next election, though ? The danger is extreme.
You still have those historic parties that amount to something together but prefer putting a bullet through their head than working together. You could say they have 5 years to change, but that's what they had already and look at how they massacred my boy.
Melenchon is not getting younger.
Le Pen will definitely be there.
Macron won't even be able to participate, two mandates only. And there is shit all guarantee that his successor will amount to anything.

Do you see the shit we are in five years from now ? And that's without the moron in chief alienating a part of the country against him again, he is able to do that, I don't have to hold his beer.

I think France voters are still very much in demand for a, let's say a father of the nation figure. A gentle giant, at least someone they perceive as such. Now let's take a look at the current political figures. Gentle giants are nowhere to be seen, and the only constant is hate.

Even if it is in five years, that there is a good chance even now is a disaster for us a society.

my biggest worry is all those anti macron who would vote for melenchon instead will vote for le pen.
Reactions: Li Kao
OP

Thought this was interesting! Not sure what to make of it but interesting still.

Le Pertti said:
Guys, I'm a bit worried about the success Le Pen is having!
Click to expand...

It's my fault, I had some really good macarons last Saturday.
Reactions: Le Pertti
OP

NarohDethan said:
It's my fault, I had some really good macarons last Saturday.
Click to expand...

Been a long time since I had Macarons! I think the last time I actually bought them was on a date 2019!
Reactions: NarohDethan

Le Pertti said:
Been a long time since I had Macarons! I think the last time I actually bought them was on a date 2019!
Click to expand...

Well it wasn't a date, I was out with a friend and told her if she wanted some. It had been like 10 years since I properly had one!
Reactions: Le Pertti
OP

Well we dodged a bullet! But it's still coming for us next election. :S
Reactions: Li Kao

Yup, biggest % of people not voting since 1969. And biggest Far Right % ever.
Everything is fine.gif

Left and right have roughly 4 years to come back from the deeper reaches of their collective ass, or we are in for some rough times.
Even the shit party of this shit president, no one at the moment looks to fit the bill for President. 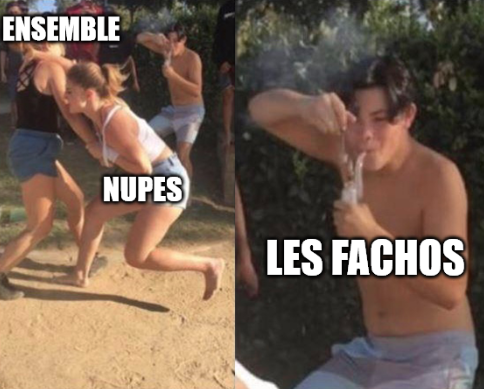