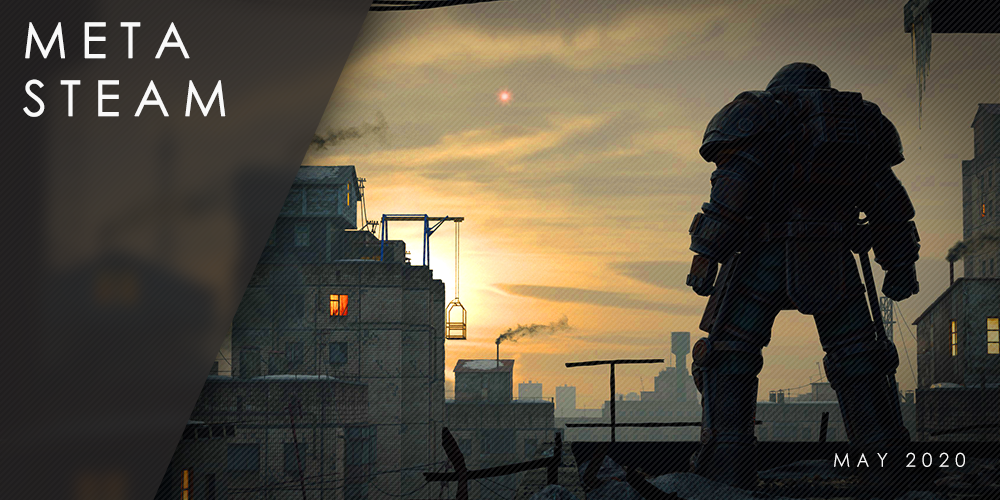 In a dystopia where wealthy capitalists control elections, media, and the lives of working people, we’re faced with two choices -- accept it or fight for something better.

Tonight We Riot doesn’t have just one hero. Instead, you play as a movement of people whose well-being determines the success of your revolution.

GUNBIRD is a vertical-scrolling shooter game that first appeared in arcades in 1994.

A comical story about the "magical mirror" that makes wishes come true. You can see the dialogue demos that unfold during the intermission and when the boss appears, and the dialogue between the characters that changes when the 2 players mode.

Trudograd is a stand-alone story expansion to Atom RPG - a turn-based roleplaying game set in post-apocalyptic Soviet Union. It is inspired by classic cRPG titles of the past, such as early Fallout, Wasteland and Baldur’s Gate series.

22 years ago the USSR and the Western Bloc destroyed each other in a nuclear inferno. Millions died instantly, society collapsed and technology was sent back into the Middle Ages. You are a member of ATOM – an organization tasked with protecting the post-apocalyptic remnants of humanity.

Two years ago you – a rookie agent of ATOM – were sent on a dangerous mission into the Soviet Wastes. As a result, you uncovered certain information about a new threat that can potentially destroy the struggling remnants of humanity.

In Atom RPG: Trudograd your goal is to travel to a giant post-apocalyptic metropolis that withstood the tests of nuclear obliteration and social collapse. There you must find what is thought to be humanity’s last hope in fending off the menace from outer space!

In the stardust and disunity of the collapsed Star Union, an insidious new race of conquerors has come to lay claim to the galaxy. Deploy and destroy as the merciless Shakarn, a vicious race of conniving lizardmen with holographic disguises ready to deceive, disrupt and disintegrate the last strongholds of human might. Utilize light and sound trickery to sabotage and scatter your foes from the inside out, overwhelm them with brutish alien force, or form the most unlikely of alliances: the choice is yours. Choose quickly though, as new environmental catastrophes can strike without warning, and enemies may spring from unexpected places. The Shakarn empire is ready to strike your enemies down, but do not make the mistake of being overconfident. Never forget that the greatest threats often come from above…

Master the elements in this stealth game where everything burns. Use your elemental powers to start fires, freeze water, and move earth as you outsmart superstitious enemies in this mischievous 2D stealth game. Take back your home and rescue captive villagers along the way; manipulating the environment to help you and harm your foes.

In a world where magic has all but died out, you’ve been branded a witch by villainous forces who fear your elemental power. Outsmart the superstitious armies of the Arch Duchess as they hunt you through lush forests, deep caverns, and over frozen mountaintops. Find and free your fellow villagers from captivity, then lead them to safety to reclaim your home.

The acclaimed bridge-building simulator is back and better than ever!

New levels, new mechanics, and a custom deterministic physics engine. Relax to the soothing new soundtrack as you try, and retry, to keep your bridges standing long enough to get to the other side!

Pinch every penny and cut every corner to edge your way up the separate verified Unbreaking and Unrestricted leaderboards. Create, upload, and play a never-ending variety of levels in Sandbox or Workshop. Challenge yourself, friends, and the world with your own puzzles.

Rocking Hero is a musical game where you take the part of a virtual guitarrist immersed in beautiful and dynamic environments.

Choose from a selection of guitars and original rock/metal inspired instrumental songs and compete on the global leaderboards with your preferred control scheme.

The Dame Was Loaded

Dames are trouble, but trouble is your business. For a dame, and maybe a hundred bucks in advance, you'd lose a few teeth and a few friends. For sweet Carol Klein, you might even stand in front of a gun or two. In a sleazy world of corrupt officials, stolen diamonds, lust and murder, you must solve the case and stay alive.


Get the achievement: Minimalist​
Complete the game without opening the item box​
People who have completed the challenge:​

Already May, what a ride so far, let's hope this month is full of exciting news for everyone and let's see how cool is Wonderful 101 on PC
Reactions: BO7AMMOOD, Rosenkrantz, FunktionJCB and 1 other person

Also, no way I'm even attempting the challenge this month
Reactions: Rockin' Ranger, FunktionJCB, Ruvon and 1 other person
OP


Kurt Russell said:
Also, no way I'm even attempting the challenge this month
Click to expand...

Kurt Russell said:
Also, no way I'm even attempting the challenge this month
Click to expand...

Me neither, I'm absolutely not into Resident Evil games, never bought one, not gonna start now

New thread!
This month has felt like a blur
Reactions: FunktionJCB and lashman

New Steam thread!
Given our fondness for Steam Pig emojis...

Welcome to the May Anime thread!

Kandrick said:
Welcome to the May Anime thread!
Click to expand...

fantomena said:
I don't get the title.
Click to expand...

We are all going to die and that's a given.
Reactions: BO7AMMOOD, Rosenkrantz, FunktionJCB and 3 others

Will kill for a Sleeping Dogs sequel

I can't deny that Valhalla is getting my attention, and there's a small chance that I'll end getting it on uPlay (or if they have a themed Series X, I'd probably get it)

fantomena said:
I don't get the title.
Click to expand...

I think it means MetaSteam will be exclusive to EGS and Uplay starting next month.
Reactions: FeedMeAStrayCat, Ge0force, Álvaro de Campos and 2 others

Nice thread and hopefully all of us won't die until we finish our backlogs
Reactions: FunktionJCB
OP

also - i missed you

over my dead body


Sakhr said:
Nice thread and hopefully all of us won't die until we finish our backlogs
Click to expand...

Uncharted 2 is pretty good. And ya it's a lot better than Uncharted 1 that much I'm sure of
Reactions: BlackRainbowFT and Swenhir


There isn't a lot releasing this months on Steam that has me excited, but I'm curious to see if JAST manages to get Totono past the reviewers, as it has been submitted to Steam and is supposed to release on the 5th. For those who are not familiar with this title, it is a VN that has frequently been claimed to be the inspiration for a fairly well known title, namely (and this is a spoiler!) Doki Doki Literature Club.
Reactions: FunktionJCB and lashman

Nice thread. The/steamthread forwarded like usual. Thanks to morningbus for the reup.


Mafia III Free Week. I'd recommend it, but the anti-Mafia 3 delegation has gotten into everyone's head and won the war.
Reactions: Panda Pedinte, Stevey, Jiggaloboy and 3 others

Kandrick said:
Welcome to the May Anime thread!

Did that adaptation do the fluff any justice?
Reactions: NarohDethan

Swenhir said:
Did that adaptation do the fluff any justice?
Click to expand...

Nabs said:
Nice thread. The/steamthread forwarded like usual. Thanks to @morningbus for the reup.
Click to expand...

thanks as always ... and praise the Bus!

added Wildfire to the ole wish list from the recommendations
Reactions: Milena and lashman
OP

Nothing I am following seems to be on sale lol
Reactions: Milena, EdwardTivrusky and FunktionJCB

Mor said:
We are all going to die and that's a given.
Click to expand...

One of the best games ever made for the price of a bag of Cheetos.

I wonder what is even happening with the game nowadays. Last I played was nearly 3 years ago and I had something like 1500 or 2k S+ ranked soldiers and a lot of fuel/metals. Pretty high security too. I bet its all been looted and soldiers stolen/killed. Venom standing there all alone waiting for Snake to come and finish the job

The International was delayed by Valve:

crimsonheadGCN said:
The International was delayed by Valve:
Click to expand...

RIP volvo ... you had a good run
Reactions: PC-tan and TheTrain

Exzyleph said:
There isn't a lot releasing this months on Steam that has me excited,
Click to expand...

Not even Matsuribayashi?
As always, thanks to lashman for posting the OT on the dot like bloody clockwork.

Also, a shoutout to you lot for keeping the spirit of animay alive since there is a lot of it being delayed due to C19.

Kvik said:
As always, thanks to @lashman for posting the OT on the dot like bloody clockwork.
Click to expand...

Kvik said:
Not even Matsuribayashi?
As always, thanks to lashman for posting the OT on the dot like bloody clockwork.

Also, a shoutout to you lot for keeping the spirit of animay alive since there is a lot of it being delayed due to C19.

Oh shit, I completely forgot it was releasing this month! I’m definitely looking forward to finally starting on Higurashi, though I first need to finish some of the too many titles I have already started on.
Reactions: Kvik

at least ONE sane person in here!

The two posters above should be ashamed of themselves.
Anime is love, anime is justice.
:madoka:
Reactions: PC-tan, EdwardTivrusky and Arsene