Available Worldwide July 9, 2021
A bond with the power
to destroy the world. ​ 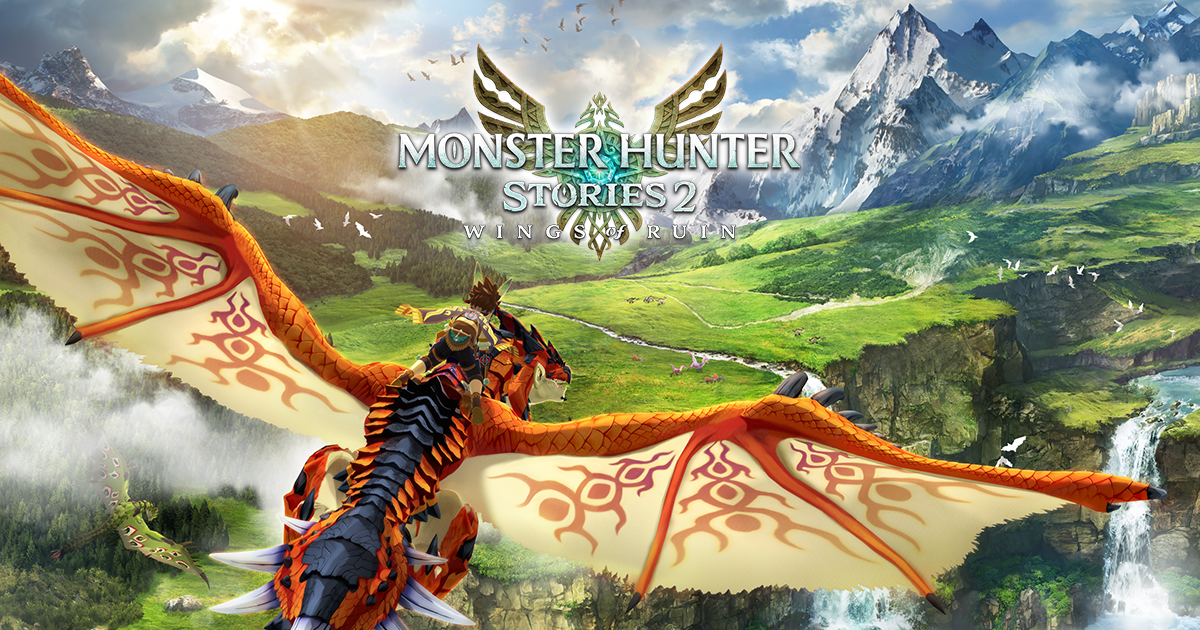 MONSTER HUNTER STORIES 2: WINGS OF RUIN, the 2nd RPG set in the world of Monster Hunter, available for Nintendo Switch.

The vibrant world of Monster Hunter Stories 2
Hatch, raise, and live alongside monsters as a Monster Rider in this fun-filled RPG set in the Monster Hunter universe.

Monster Hunter Stories 2: Wings of Ruin offers both RPG and Monster Hunter fans a unique new experience with a rich storyline featuring charming characters, challenging quests, and friendly encounters with familiar monsters from the popular series. After Rathalos vanish across the world, players assume the role of a young Monster Rider who is the grandchild of the illustrious Rider Red. Together with the mysterious Wyverian Ena and the self-proclaimed Felyne hero Navirou, players embark on a sprawling adventure that spans numerous destinations. As players hatch, train, and live alongside their Monsties, they will encounter numerous new allies, foes and challenges on their path to unravelling the prophecy surrounding the Wings of Ruin.

At each new destination, players must make use of their Monsties’ unique abilities to reach new areas and uncover hidden valuables. Players will engage in thrilling turn-based combat, as they utilize familiar Monster Hunter weapons, strategic skills, and devastating Kinship Attacks to overcome enemy encounters. Those interested in partnering with a friend can even team up in co-op multiplayer battles.

Embark on a thrilling journey alongside Ena, Kayna, Alwin and Navirou, and take on all-new Co-op Multiplayer quests in Monster Hunter Stories 2: Wings of Ruin, coming to Nintendo Switch and PC July 9, 2021.
Click to expand...

But the release date is already close, and... we have no gameplay at all, that's pretty weird.

Yay for PC being day and date. Looking forward to the gameplay reveal and reviews.
Reactions: lashman
OP

Meet new characters and get a glimpse of Razewing Ratha's power in the latest Monster Hunter Stories 2: Wings of Ruin trailer! Can Riders and Hunters work together in this epic tale?
Click to expand...

Prepare for an epic adventure with this brief overview of your journey in Monster Hunter Stories 2: Wings of Ruin!

Tons of Rathalos vanishing... strange pits turning up... is this the work of the Wings of Ruin?
Click to expand...

When Razewing Ratha is awakened, disaster will befall the land... What new mysteries and threats lie ahead as a result of this cataclysmic event?
Click to expand...