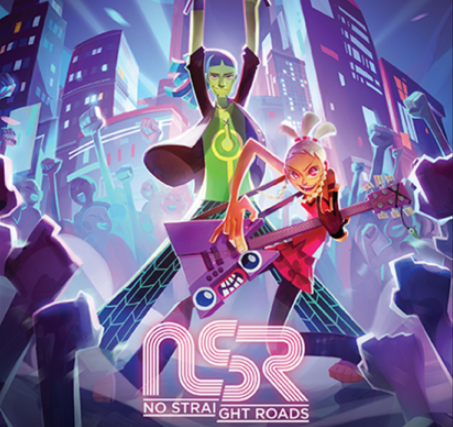 Metronomik, a studio founded by Final Fantasy XV lead game designer Wan Hazmer in December 2017,will release No Straight Roads, its rhythm action game due out for PlayStation 4 and PC this spring.

No Straight Roads is created with two goals in mind: to reinforce the role of audio in a video game without turning it into a rhythm game, and to tell a story about different musical ideals through powerful visual elements.

“We are really happy to have won [the Best Audio Award at Taipei Game Show’s Taipei Indie Game Awards], as many wonderful titles were nominated in the different categories,” said director Wan Hazmer. “Being awarded with this prestigious prize by the votes of the jury gives us a lot of strength and allows us to confirm that we are heading in the right direction. The sounds and music of No Straight Roads are essential to its gameplay. What we’ve been able to showcase so far is thanks to the amazing music of Falk—who have worked on the music of previous Final Fantasy and Kingdom Hearts games—James Landino, Funk Fiction, and Andy Tunstall; and the fantastic sound design of Gwen, Sharon, and Jeremy!”

Your music can change the world in No Straight Roads. With the power of music, you can transform certain objects into weapons. Your performance in the game will also bring about changes in the game’s music: a dynamic transition between rock and Electronic Dance Music.

A new keyabove is showcasing one of the main protagonists, Mayday, as she looks towards the tower of No Straight Roads, the EDM empire in the game. This piece is inspired by an iconic pose of a legendary Japanese video game hero.

Daim Dziauddin and Wan Hazmer comment that: “At Metronomik, we are passionate about the video game industry and its legacy. A few of our team members have worked on Square Enix titles. Today, January 31, marks the 22nd anniversary of Final Fantasy VII. This new key visual created by our concept artist Ellie Wong is our way of celebrating the masterpiece. It’s both a tribute and a testament to our ambitions.”

I'm not seeing or hearing the rhythm elements in the gameplay videos. The music does seem to be affected by player actions or to have boss patterns shaped after it but not to a degree where it requires you to play at a given rhythm. So, more like De Blob which also changed tunes based on what you did but other than that played like a normal 3D platform game. Music themed but not music play. I just don't see how it's a rhythm game. Maybe I'm missing something?
Reactions: lashman
OP

looks at the name of the publisher

lashman said:
does that mean it's gonna be egsclusive?
Click to expand...

you were right all along

No Straight Roads is due out for PlayStation 4 and PC in early 2020.
Click to expand...

I really like the artstyle but I think I'm gonna have to play it before I know what is it exactly that I'm getting into.
OP