Publisher Devolver Digital and developer Flying Wild Hog have announced Shadow Warrior 3 for PC (Steam). It will launch in 2021.

Fallen corporate shogun Lo Wang and his former employer turned nemesis turned sidekick Orochi Zilla embark on an improbable mission to recapture an ancient dragon they unwillingly unleashed from its eternal prison. Armed with a punishing mix of blades and bullets, Lo Wang must traverse uncharted parts of the world to track down the dark beast and push the apocalypse back yet again. All it will take is the mask of a dead god, a dragon’s egg, a touch of magic, and enough firepower to hold off the impending cataclysm.

We are beyond excited to bring Shadow Warrior fans a completely fresh experience, and we can’t wait to show off the new features we have in store for them. We want to make sure that our fast-paced gunplay sequences, razor-sharp melee combat, and spectacular free-running movement, will get their adrenaline pumping and senses thumping,” said game director Kuba Opon in a press release.

Opon continued, “But we never forget Flying Wild Hog’s roots and we hope that Shadow Warrior 3 will feel like a homecoming for those fans that have been with us since the beginning. And we can’t wait to introduce new players to Lo Wang, our quick-witted hero with a tongue as sharp as his katana. Shadow Warrior 3 will see him face a threat so huge it may be too big even for him to handle.”

Going by the description on the store page, they are focusing heavy on movement mechanics, hoping for well crafted levels to accommodate it.
Reactions: nordschatten and lashman

Based on the store page, they're continuing from the cliffhanger in Shadow Warrior 2, but this game will be singleplayer-only, and presumably it won't be a looter shooter. This is speaking to me as a Shadow Warrior 2013 fan. There were many problems with SW2, and one of them was that everything about the story felt both badly written and butchered to work in a co-op looter shooter format. Co-op does terrible things to game stories when those stories are trying to balance being serious and being comedic. You can't have quiet moments of contemplation in a WILD AND CRAZY co-op game with EPIC LOOT DROPS.
Reactions: nordschatten, Phoenix RISING and lashman
OP

As a fan of both previous games, I am onboard with this.
Is he wearing the mask of the sidekick from the first game (in the trailer)?
Reactions: lashman

Aelphaeis Mangarae said:
Based on the store page, they're continuing from the cliffhanger in Shadow Warrior 2, but this game will be singleplayer-only, and presumably it won't be a looter shooter. This is speaking to me as a Shadow Warrior 2013 fan. There were many problems with SW2, and one of them was that everything about the story felt both badly written and butchered to work in a co-op looter shooter format. Co-op does terrible things to game stories when those stories are trying to balance being serious and being comedic. You can't have quiet moments of contemplation in a WILD AND CRAZY co-op game with EPIC LOOT DROPS.
Click to expand...

Thank goodness because I HATED Shadow Warrior 2. I think I spent an hour on a mission because I didn't realize it was trying to be FPS Diablo, and I didn't have the right gear.

Shadow Warrior 2013 is one of that generation's best games. Duke Nukem on the surface, but a beautiful story on the inside.
Reactions: nordschatten
OP 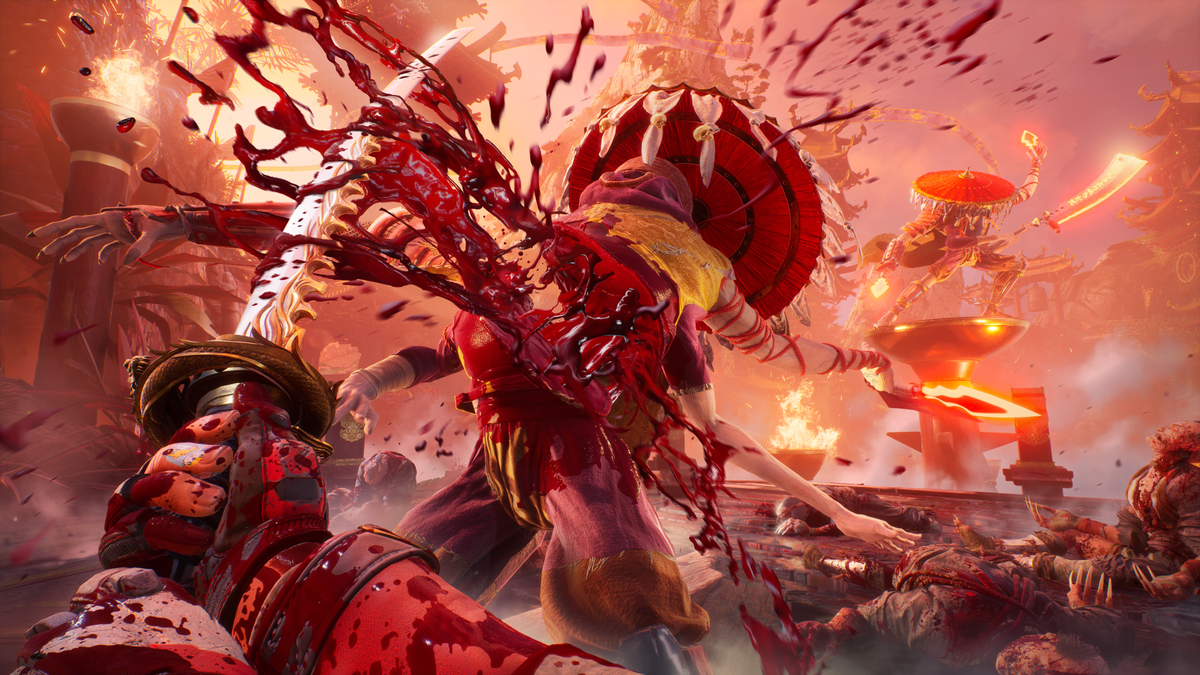 No more stats, a more focused arsenal, but a whole lot of demon blood.

In next year's Shadow Warrior 3, Flying Wild Hog intends to go back to the basics.

"It's going to have much simpler character progression," says Paweł Kowalewski, game designer at Flying Wild Hog. "We don't want to draw the player's attention away from the action. We don't want anyone standing in place for five minutes wondering what upgrade they should put on their weapon to increase some stat for whatever percent. We are going back to the first Shadow Warrior, but we are upgrading everything."

Shadow Warrior might not be the doodad-laden maze that it was in 2016—you might not be able to min-max Lo Wang like he's Commander Shepard—but Wild Hog still intends to deliver a combat experience that's more flexible than its previous efforts.

"We improved the movement of our character, and that allowed us to build bigger, more vertical arenas. But then we thought, 'Now we have to fill them with combat,'" he says. "We want more than the generic explosive barrels, we want devices that are connected permanently to an arena that you can interact with in different ways. We are thinking about approaching encounters from different angles."

It was enthralling to witness the sheer number of weapons the team managed to fit into Shadow Warrior 2. (73 in total!) Kowalewski says the team is reeling that instinct in considerably—they don't have a final count of arsenal in Shadow Warrior 3, but he expects it to land somewhere around eight weapons you can carry around, each polished to a mirror shine.

Instead, Wild Hog wants to express its appreciation for videogame gun design in other ways. When you kill certain enemies, says Kowalewski, Lo Wang will have an opportunity to gain their "trait." For example: In the trailer we watched Wang cut down some weirdo jack-in-a-box mech. Afterwards, he reaches into its sundered chest and pulls out a horrifying fireworks-belching minigun—just nothing but confetti and gore—which obliterates the rest of the legion around him. "You can only use it for a limited time," he continues. "It adds another layer to the combat."

"We are old enough to remember the classic game. It's surreal that this IP is basically ours right now," says Kowalewski. "This is our Shadow Warrior, people will connect this game with our studio from this point. At the beginning we were worried if there was a place for a game like this on the market. But from the response to Shadow Warrior 2 and the trailer for Shadow Warrior 3 on social media, it feels great."
Click to expand...

Despite loving the original, I haven't played any of the titles from the reboot
Reactions: lashman

Jawmuncher said:
Despite loving the original, I haven't played any of the titles from the reboot
Click to expand...

you should - the first one is pretty good
Reactions: Jawmuncher and nordschatten

Jawmuncher said:
Despite loving the original, I haven't played any of the titles from the reboot
Click to expand...

Phoenix RISING said:
Agreed with lashman . The first reboot is worth a playthrough.
Click to expand...


Redux is the later version, but I never really played it, I played the original, which was quite good indeed.
Reactions: lashman
OP

Get a new look at gory first-person shooter Shadow Warrior 3 and see the first reveal of the Doomsday Device level, the Gassy Obaryion enemy, and most fun of all, the "Double Trouble" gore weapon highlight. As a bonus, you'll see some Arena Kills, i.e. how you can use the environment against your enemies.
Click to expand...

It might just be the poor sound mixing in the video... but I can barely hear the gun sounds. Guns lacking any proper impact was a criticism against both the previous games. I really hope this still isn't the case.
You must log in or register to reply here.
Share:
Vk Ok Blogger Linked In Diaspora Weibo Facebook Twitter Reddit Telegram Viber Skype Email Google Yahoo Evernote Xing Link