I'm going to have to bite the bullet and stump up the cash for one of those events sometime soon. Luckily they're usually available to watch for two weeks or a month afterwards. Have fun!

This was mentioned a few pages ago ( i think ) but Maid Mint's last stream is in 8 hours (~20:00 BST?) and i think the VODs are being taken down too in a few days so grab 'em if you want 'em. Didn't have a huge following but people on reddit and places did talk of her. Good luck for the future!

edit: God i love Kiara's Mario Kart streams where she gets bullied by the fans and is shouting at them to "Eat Shit!". Sounds harsh but she has great banter with the KFP Staff and now-and-then they are nice to her too.

Oh yeah, There's a pair of Nousagi that turn up for fun too. They're kinda legendary in her MK streams now.
Last edited: Apr 3, 2021

Yes it's good. They are really flexing their AR tech.
Reactions: EdwardTivrusky

Ha ha ha ha ha! I'll have to watch that FitMC video later on. He's old school 2b2t and has been there nearly forever. I know he's been involved in drama there but his history and exploration of 2b2t videos are good. I love the fact that someone managed to get a picture of Pekora up without it being griefed though. There's some amazing structures on 2b2t if you scrape away all the drek.

I thought for a horrible moment that a VTuber with a sizeable following had joined which tbh would be boring. They'd get found out, hunted down and endlessly griefed and murdered in spawn so it'd be a bit pointless and a waste of a stream really. Unless they found a crew willing to help them out which can happen sometimes.

edit: That was a good video. Short and detailed and worth a watch.
Last edited: Apr 3, 2021

Looks like there were scheduling problems so there's no confirmed guest for Coco's Shitpost Review but she says she has a plan...

The plan is that she hopes one of the holo girls can make it in time as Coco's put out an open invite.
Pre-Chat are saying it's a call-in stream.
Last edited: Apr 4, 2021
Reactions: Durante and Anteater

Yeah, Mint was a fun stream. I had it open in another tab and was swapping in often to check it out. She had about 1100 viewers at one point and earlier when the count went up to ~1000 she said it's the most she ever had so it seems like a lot of the infrequent viewers made an attempt to pop in and watch her final stream. I had to go to bed after about 4 hours but she was still going strong at that point. Good luck to her whatever she ends up doing next.

I only caught the last half hour of Holotalk with Aki too so i have that to watch later on.

EdwardTivrusky said:
Looks like there were scheduling problems so there's no confirmed guest for Coco's Shitpost Review but she says she has a plan...
Click to expand...

She made amazing use of that Yagoo sound board.

Also Fubuki once again showed how she's always up for supporting the other members.
Reactions: EdwardTivrusky 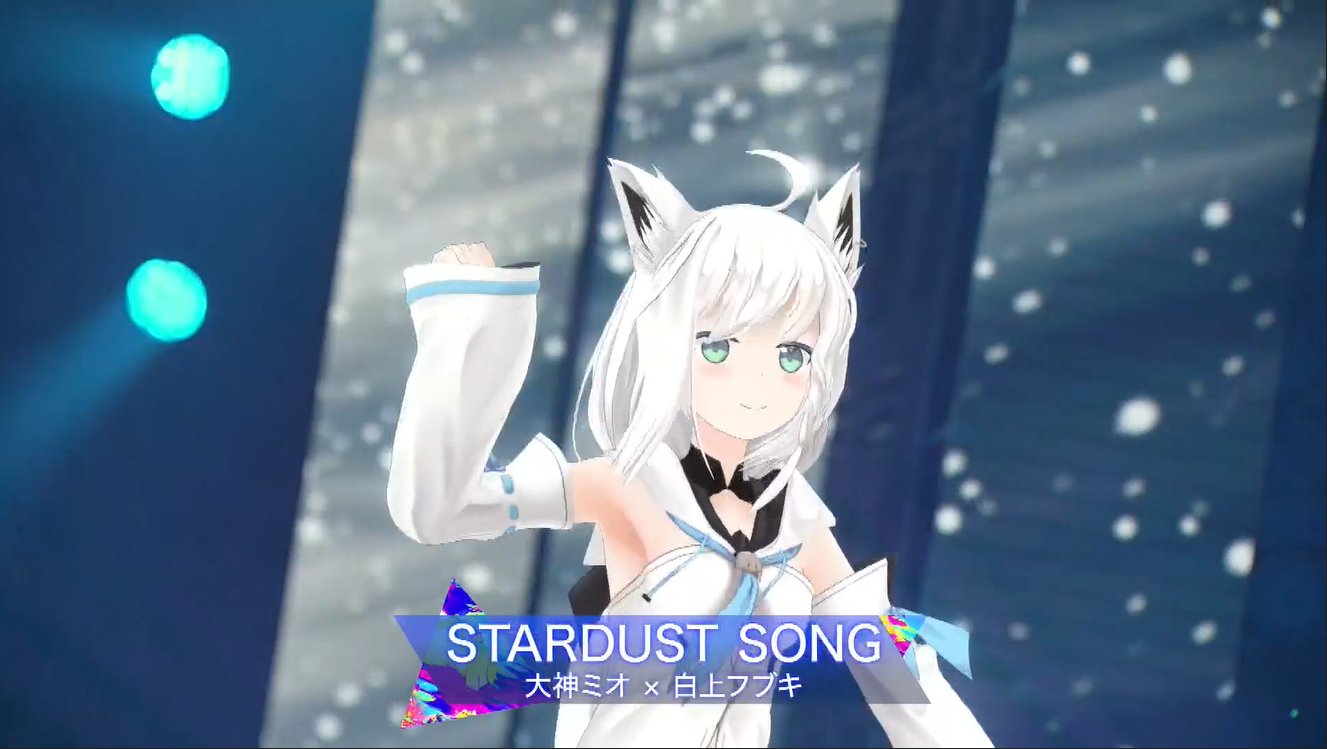 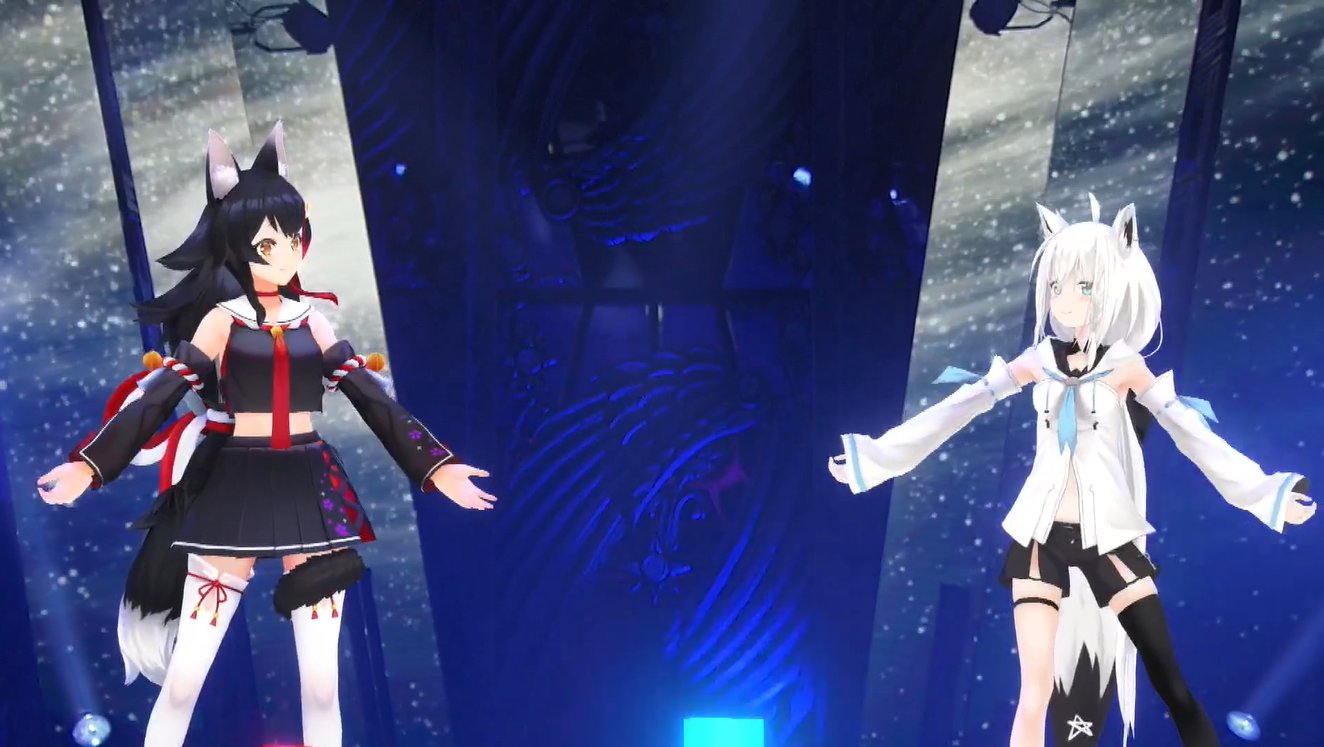 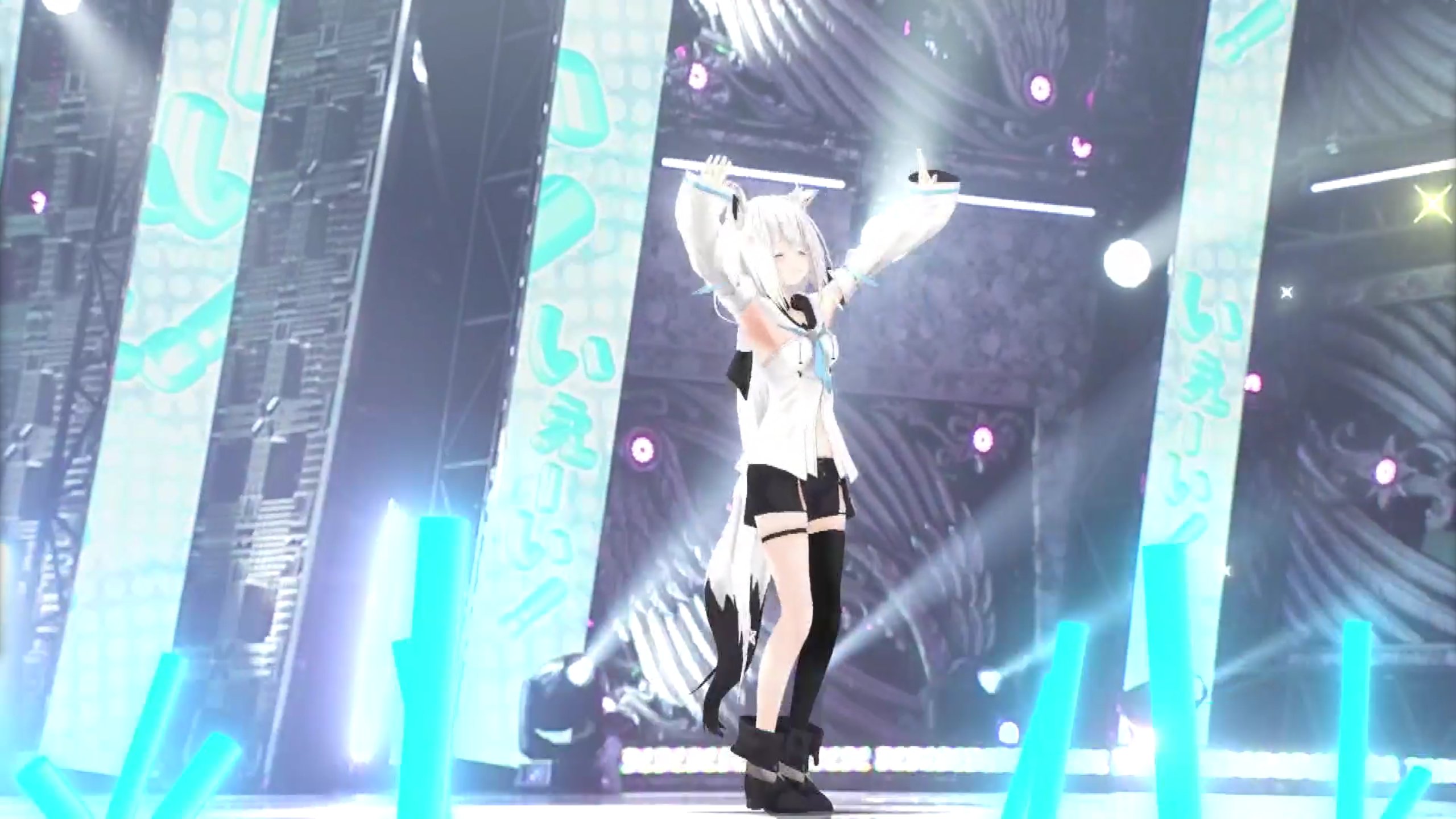 Apparently Lategra Inc are the same people who helped put on a few AR events and they're getting better and better from what i've seen on twitter. I saw some AR shots of a Cosplayer with the hosts and it looked great. someone on the reddit posted this as a link to the Grand Blue Fantasy concert they Lategra helped with and if V-Carnival has been anything like this well done then it must have been fantastic.

Timestamp supposed to be 3:02:30.
I don't know GBF aside from it exists so i'll have to flick through the video later and find some more songs.

Here's the reddit i got the link from: Hololive Reddit - V-Carnival Performers thread
Looks similar to what Riot and LoL were doing at their live gigs but obviously a bit more advanced now.

I've also got a bunch of archives to watch as HoloEN are starting to get their Monster Hunter Rise streams going. Ina last week and Gura yesterday. I'm tempted to get it but i have a ton to play already so it'll have to wait... probably.


edit: Calli's new MV is out: Red. I like it, she's changing up her beats and growing more confident. Good to see. It's also her Birthday and EP release stream... and she's being bullied with SpuaChats and chat's going brrrrrrr.

Just got this notification too. Silva Gunner obviously glad to have new material to work with. It's damned good.

Calli on top 3, what a time to be alive.

If you like Calliope consider buying her birthday merch. For that price it's a really good deal and you'll get vinyl too. 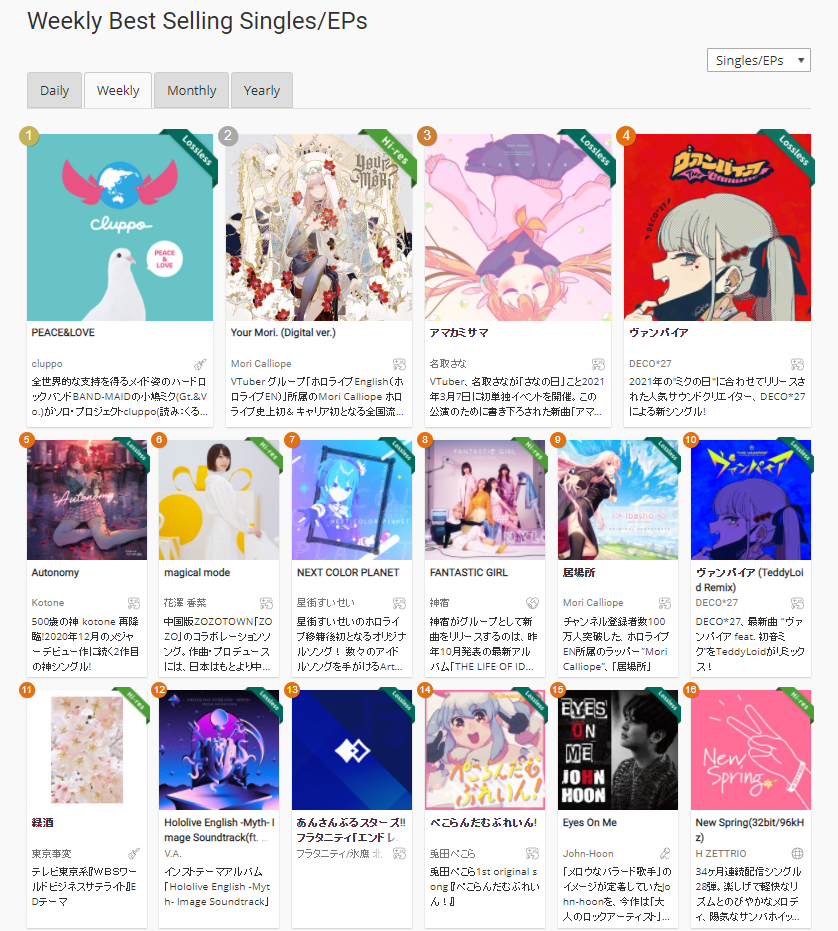 Hopefuly someone translates and clarifies if she's going to be promoting the game or actually in it.
Either way good job, Botan!

Bought Calli's new EP and a couple of adjacent albums last night on Amazon Music as i don't have iTunes. I also have some HoloEN merch bought last month but i've no idea when that will arrive as i'm in the UK. It'll be a nice surprise when it does show up though. I'm going to wait and see how that order turns out before ordering anything else physical from JP at the moment.

Saw this on the Holo Reddit and it's really funny... and creepy... and funny!

Really interesting interview with the producer of HoloEN... gJ: Auditions for new members of hololive English has just ended. Did you plan from the start to gradually increase the number of members and knew the timing as well? If not, can you tell us why you decided to expand the hololive English family at this time?

hololiveEN: Well, I can't give you a definite answer, but the plan itself is booked up to one year in advance. I think the reason why we decided to expand might be because we felt that we didn't have enough characters for the story yet. I can only say that for now.
Reactions: Rockin' Ranger

A game for Fubuki

Pikamee gonna play with chat tomorrow. I hope to see some of you there I'm not crazy enough to buy a switch for this.

I haven't had much time to follow Vtubers in the past few days and just saw that Haachama did a 500k subs countdown/celebration stream. Because of course she did.
Reactions: Kvik and EdwardTivrusky

This is incredible.
Reactions: EdwardTivrusky

I'm glad Miko and Marine are finally streaming again after all the drama with that H-doujin author. Frankly, the apology stream was part of the Japanese culture we can all do without. Plus, the antis had a field day as well by playing both sides.

From what i read, the artist actually realised they were being played and put up an apology and message of their own pretty quickly after the incident but of course the Antis milked it for all it's worth and the damage had been done. Apparently, the author had no idea about VTubers etc and was only shown the out-of-context clips. The Reddit community mostly decided to not discuss it so that the Antis were not given any amplification but it was too late and Miko and Marine had announced they were taking a break.

Unfortunately, It's not going to be the last time this kind of thing happens so it's probably going to end up with the community not discussing it once the initial story is out so we starve it of oxygen and hopefully dampen the drama.

I've been tied up rewatching Nyanners Bloodborne and Final Fantasy X VODs in the evenings recently and i'd forgotten her session of Khumani knob jokes that no lie, goes on for an hour of her wheezing with laughter, doing impressions and just cracking up. Just when you thought she'd stopped laughing she said something else which triggered another train of thought and she was off again. It's something else, she acknowledges the cringe in the intro to the next VOD too which is funny itself. She sure knows that game inside-out though and i do like her Bloodborne playthrough, very comfy and funny. I'll get around to catching up with some archives of other VTubers by the weekend... probably.
Reactions: Panda Pedinte and Kvik

I found this little channel. Relatively new, but the animation and artwork are charming. You may have seen the source material many times since it has been clipped so often, but it still feels fresh.

The author has some great fan arts as well on their Twitter.

I only know Pekora out of that list but there again i don't use Twitch much at all so that's not unexpected.
In fact i usually watch Twitch VODs on their Youtube Archive Channels Like Nyanners and HoloFightz who backup their streams to YouTube.

This was a fun stream, if a little chaotic. Well, Haachama is there so it's par the course~!

My favourite question was "What is Matsuri's favourite English phrase?"

I should watch more of Mel's stream~

Just a short inconsequential thing that makes me happy,
AZKi has added actual glowsticks to her stamps! Woohoo! No More using Comets or Crayons. 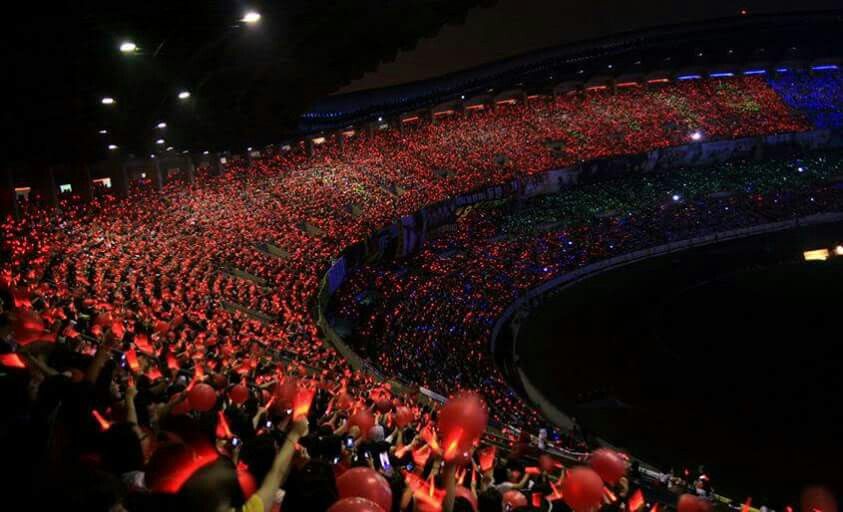 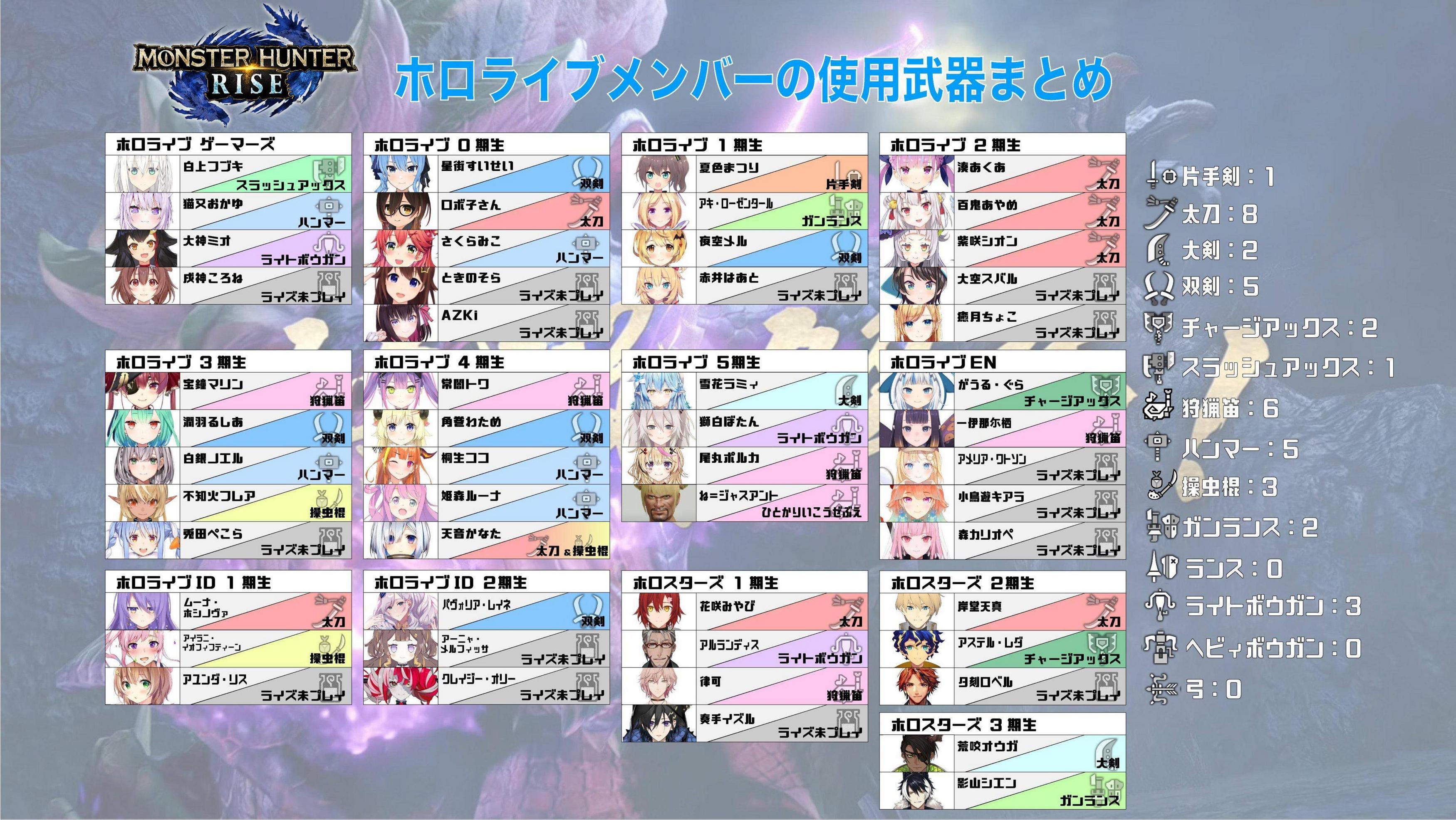 Now think how much exposure Atlus would get if they allowed Calli to play Persona 3!
Shake my damn head.
OP

Only three Insect Glaive users across the entire Hololive/Holostars?

I went and bought monhunt too, since I don't plan to watch all of the monhunt streams.

I may as well play it myself
Reactions: Kvik, Mutant Strawberry and EdwardTivrusky 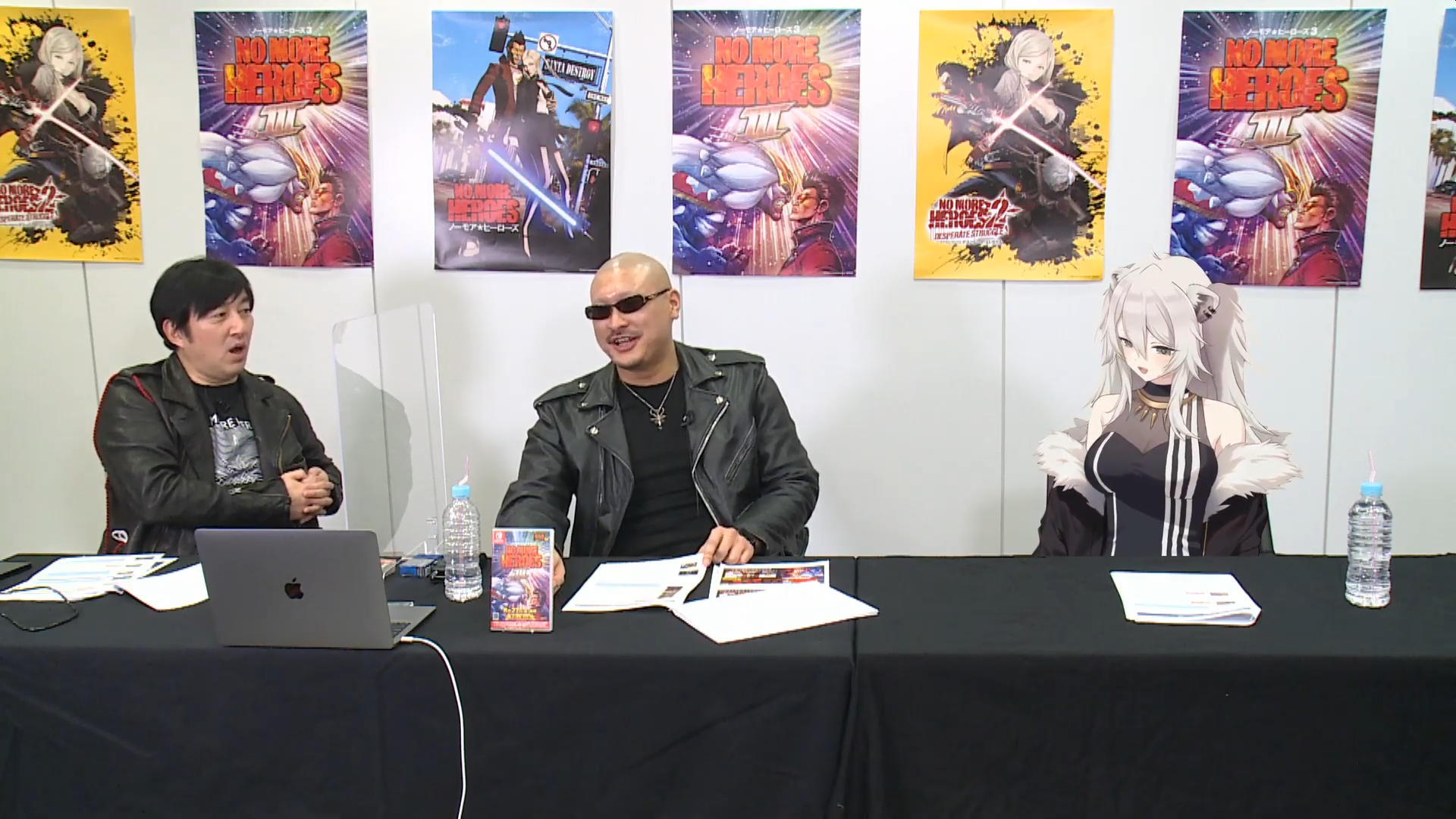 Imagine being Botan, sitting there trying her hardest no to ask "So uh, how about that PC version, Suda-san?"


If you are interested on that game, give it a watch.

That's honestly the first time i think i've heard of that game. ha.

edit: Ahhh, i don't have any Blizzard games so i don't have the launcher so i don't see Blizzard news often enough to remember any of their announcements. Might watch anyway just to see how it's going.

Yeah, the blu-rays are up for preorder on CDJapan. Also on Amiami, Rakuten and a bunch of other Japanese shops.
Reactions: Mutant Strawberry and EdwardTivrusky

Pekora just started playing it today, after some time trying out different weapons in the training area, for now she's starting with switch axe.
Reactions: EdwardTivrusky

Some great excerpts in this clip.

Ina has been playing MonHun Rise with Anya & Reine and of course Pochi, who could quit at any time i'm sure.


edit:
Chat: "hold A until you get red phials the press ZR+A X+A X+A ZR hold A until red the ZR+A"
Me: WTF is this! Oh no, i'm gonna have pretzel fingers aren't i?
Reactions: ExistentialThought

Kiara is streaming Diablo II Resurrected at the moment.


Looks like they're still getting the En side of things up and running but the De links are there already.