She was gonna play Sonic 3 at first, but had problems with the capture card and/or cable she was gonna use for it, so she switched to Mario World instead and is gonna order a new card/cable.
Reactions: Anteater

Almost that time of the week again ...

The Circus is coming to town!

Miko's reaction at the Gravure Photoshoot minigame in Kiwami 2...

Calli's about to start a 12 hour non stop endurance stream in an effort to reach 1m subs.


And Congratulations to our sleepy Reaper for hitting 1M subs and launching an acapella karaoke session to celebrate! 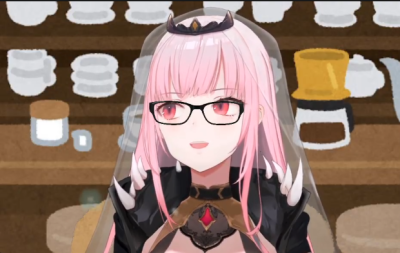 I have been watching the Akukin relay since the middle of Choco's turn.
It's really interesting to see what each member does in their 30 minutes, and how it reflects their character.

Kanata was really fast and methodical with building the pixel art decoration/signage.
Marine was a great entertainer as always, joking with the chat and involving other members while building Aqua's TNThrone.
Nene was chaotic and her intense mental struggle with the letter E was hilarious.
Mio started, as you would expect, by fixing up the mess Nene left behind.
Reactions: Kvik and EdwardTivrusky

It's been crazy seeing a herd of 40k+ viewers wandering channel to channel following this relay for the last few hours. Good times.

edit:
OMG The HQ walkabout ended just as you would expect it to if you watched the relay and saw one particular building being constructed.
Yup, It's an Aqua tradition, lol.
Last edited: Jan 25, 2021
Reactions: Kvik and Durante

The new cover from OkaMio is fantastic and the art... phew.

This is amazing. Korone Taxi Service.

EdwardTivrusky said:
OMG The HQ walkabout ended just as you would expect it to if you watched the relay and saw one particular building being constructed.
Click to expand...

I don't play Minecraft despite enjoying Holomems' streams of it, so my first thought was that Marine blew up the entire office complex.

I'm absorbing all of these Micra mechanics via osmosis.
Reactions: EdwardTivrusky

Miko and Kiara are gonna play NieR:Automata today, I wonder if these will be just sponsored streams, or if Cover reached a deal with Square Enix for their talents to be able to stream their games, like they did with SEGA. It's also possible that it could be for NieR only.

If they end up being able to play Square Enix games in general, Pekora will be happy, since she really wants to play Dragon Quest games on stream.
Reactions: EdwardTivrusky and Kvik

I'm watching Miko's stream right now, but I'm a little curious how Kiara's stream going to go. I'm not subscribed to any of EN-girls, but I watched a little of Kiara's Fire Emblem stream in the past and there was a lot of back seating there.

Kiara actually has a really good chat and can bring them back into line pretty quickly. I'm subscribed to all of HoloEN as they appeal to me at different times due to their different personalities and depending on my mood. I'm also watching a lot more HoloID as i can understand them without resorting to clips like i have to with HoloJP.

To be honest with the big streams the chat moves so fast i tend to hide it for the EN & ID streams so i don't notice the backseating too much unless the streamer mentions it. Even Korone punched her chat in the face the other day for moaning about how she was playing Mario, lol. For the JP streams i use YTCFilter to show the translations so i don't get too much chat to read anyway.


They were obviously teasing her something rotten as she had their pepper avatar in her coffee which means they've been moaning so much they're all shrivelled up so she puts them in coffee to rehydrate. Basically it's her way to tell chat to calm down a bit.
Last edited: Jan 28, 2021
Reactions: Panda Pedinte, Gizmo and Kvik

Pekora announced that she's gonna stream Dragon Quest Builders 2 this weekend (she has talked before about really wanting to stream Dragon Quest games), I guess they have gotten permission to play Square Enix games in general, maybe. ^^
Reactions: Kvik and EdwardTivrusky

EdwardTivrusky said:
To be honest with the big streams the chat moves so fast i tend to hide it for the EN & ID streams so i don't notice the backseating too much unless the streamer mentions it.
Click to expand...

There was an influx of EN-viewers in Miko's Nier a Tomato stream last night. Most of them were telling Miko to hit L3+R3 (self destruct/disrobe 2B's skirt). That was embarrassing, from my point of view. I can imagine the EN-girls has it worse since the combination of Twitch crowd + popular game is a recipe for backseating.

That's going to be a 3 hour episode, surely?
OP

So by now, 1000s of vtubers have covered this song, so I really wasn't expecting much from this....
I was wrong. What a banger!

Azki is one of the OG members of Hololive Productions under the INNK (INoNaKa) label which is their music branch. She concentrates on singing, music production, collabs with other singers, and has weekly interviews with VTubers and a weekly radio show called "3 Code Miracle" with two other VTuber singers.

A while ago Azki said she wanted to stream a game and she's going to be streaming Minecraft with Sora!


Back in November 2020 Azki had a 48 hour showcase of original VTuber songs on her channel and it was amazing. I think there were around 250 VTubers showcased. They also helped as chat mods, gave out info, went full on screaming fan when their favourites came up and supported artists they didn't know too well. It really was a great weekend and i found a bunch of new artists to listen to.

Suisei moved from INNK to Hololive so this was amazing to watch live. Azki and Suisei sing Inochi which is my favourite Azki song.
It was even better as i didn't know Azki would be there too until they panned out from the opening shot with Suisei. You can actually hear their voices getting emotional as the song goes on.

Oh, she had a great collab with Kanata too!

oof at the father part

Ame and Gura are playing Battleblock Theater -- I feel like this should be a good game for a coop stream:

This is a hilarious random encounter Minecraft clip:


It shows how much of a situational comedy genius Polka is.
Reactions: Kvik

Temmie will collab with Pikamee. Not sure what they'll be doing/playing though.

it's drawing pokemon collab! been watching but forgot to post

Durante said:
It shows how much of a situational comedy genius Polka is.
Click to expand...

I didn't have to play the clip to know what it's all about (I've watched Flare's POV of the whole encounter). I've never seen her laughing so hard before!

Ha, madness! Nijisanji bringing the "wtf?!" from the 3rd Feb with 59 VTubers in 15 minute chunks. lol

I've been watching Miko's Yakuza Kiwami 2 playthrough so I'm behind on the rest of my subs. Managed to catch Nene's outfit reveal though, that was fun.

In the meantime, the Tsunomaki Janken contraption looks great.


Coco's Yakuza playthrough is fun, but I still prefer Miko's playthrough, probably because she's a first-timer and gets super invested in it.

This is going to be good...

Recently I've started watching Pochimaru, I find her streams really enjoyable. Somehow, her Japanese is easier to follow for me than most other JP Vtubers (I'm still far from understanding everything of course, just a somewhat larger percentage).

Here's a stream where she speaks a lot of English:

Durante Yeah, i had Pochi's stream open alongside Reine's Debut and it was great to see her so proud and happy. I think every other word was "sugoi" or "kawaii" and her hand movements when Reine's bust was shown was hysterical. She seems really fun and i need to try to get translation of her manga work everyone mentions. It's supposed to be quite a ride.

She's done some collabs with HoloID. There was a recent drawing collab with Ina, Iofi and Pochi.
Last edited: Feb 3, 2021

I admittedly always thought the people calling Haachama a genius were overstating it a bit, I mean making some really terrible cooking videos is certainly fun but maybe not genius material.
But the stuff she was doing right now in the "[DEBUT STREAM] #HololiveEN0 ※No archive" by weaving a storyline using karaoke song lyrics while switching between and combining 2 different avatars in different scenes was honestly pretty genius.
Reactions: EdwardTivrusky

Durante You're not the only one.


Summary of the Stream:
Even the song set list is genius,

Haato Appears *
-We don't talk anymore
-Never gonna give you up

-Akai Haato Appears-
"Thank you for helping me to be free"

-Haachama End Stream Here-
From: Hololive Reddit: Now tell me this girl is not genius
There's another similar thread without a link to a clipper or an overview with the names etc but i think you've seen that thread.
Reactions: Durante

Have to say that I wasnt really following Haato, (The terrible food cooking clips put me off) But her recent stuff is really, amazingly creative and turned me into a fan.

Haachama is definitely on an impressive creative streak at the moment. In my view at least. I've always liked her stuff but she's really having fun with it all now. I just noticed that her latest Minecraft stream has "[Hololive/Akaihaato]" in the title. So I think she'll be tagging the two names for a while... because why not? It's good content.

The HoloID Phasmaphobia plays recently have been amazing. Iofi and Risu started stacking tins in the trailer and other japes to help calm Moona down when she got super stressed and anxious. They've got a great chemistry there. Love 'em!

Also, Durante you probably already seen it but there was a great Phasmaphobia collab stream earlier with Ina, Iofi, Reine and Pochi. Well worth watching. Each streamer has their own POV up so there's 4 streams to watch, yay.

Anyway, dunno if this should go in the music thread but i'll post it here anyway.

Rushia is bullied in Smash and our tiny necromancer's demon voice awakens. Pekora's laughs crack me up as does Marine reminding her to do "Moe voice".


"Grim and Frostpettan Necromancer of the North" - Fucking lol!

These days, when you think of meme review, it's practically synonymous with Coco. but the original idea of "reviewing meme" came from Haachama, although its first evolution was not strictly a review, it's more like a punishment game for Haachama for not understanding English meme.

So, I guess you could say that Haachama is a good content creator with plenty of original ideas.

After Coco's meme review with Mio ended at 3pm, I immediately camp at Flare's 500K sub karaoke stream. It is now quarter past 7pm and not only she reached her 500K subs goal, but she is also still going as we speak (almost 60 songs). She used to have one of the lowest subscribers count in Hololive before Gen 5 come about, so I'm quite pleased that she found success, and hopefully will keep growing.

The fuck is going on with haachama

Hektor said:
The fuck is going on with haachama
Click to expand...

She's approaching 1m subscribers, so I guess her recent streams and short videos have been the start of her preparation for something...special...for that celebration.
Reactions: ExistentialThought and EdwardTivrusky
128 More Posts...
You must log in or register to reply here.
Share:
Vk Ok Blogger Linked In Diaspora Weibo Facebook Twitter Reddit Telegram Viber Skype Email Google Yahoo Evernote Xing Link