EdwardTivrusky said:
I just had a notification that MusicVKet have a weekend event starting this evening. I think i subscribed to a couple of the artists during the last AZKi Spotlight stream. VKet is "Virtual Market" and they have a game, comic and music sections. They put on events, concerts and exhibitions in VRChat but you don't need VR as they have pancake access too and it's free. Mostly doujin but there is some corporate presence. The MusicVKet has a bunch of booths for the artists and their music and there are Live Virtual Performances through out the weekend.

They seem to be mainly JP but i have seen En and Sp translations of their videos but i've only had a surface look. I really need to have a proper dig about one day and see if there's an equivalent En type of thing around. I said i'd do it after the last AZKi Spotlight but ... yeah. Am forgetful... and lazy as i'd want to calibrate my VR kit and eh, effort.

I've no idea about the quality of the artists and it imagine varies wildly but i'll probably have the channel open now and then over the weekend while i disassemble my PS4.

Day 1 is Live here and seems to be showing clips of the performers for the weekend. Seems to be some decent artists in there tbh.

Some of these VR Chat models are amazing.
Click to expand...

Thanks for this. The event last year got me listening to some Vtuber music before I even knew they were vtubers.
OP

Indie English vtuber does a scarily accurate impersonation of 30 vtubers,

Thanks for that, i'll watch it later.

I'm watching Kiara's amazing HoloDE Debut. Amazing. Almost as amazing as Youtube finally lifting her Shadowban but now they've removed the last 2 months of her videos. It's the "Suspicious Activity" excuse they've been a bit too eager to use these last few weeks but Kiara says she might have an idea why it happened but it's not worth talking about or speculating. Just move on. Oh no! Her recent songs are gone from Youtube for the moment too, i just realised that as she said it.

Still, she gets a third debut out of it the mad lass.

Kiara has a Hololive Originals Karaoke stream tomorrow and a "German Language Lesson for Gura" stream on Sunday.

VOMS' anniversary is this month. We don't know when Pikamee will be back but it's not too late to make something for them!
Reactions: ExistentialThought and EdwardTivrusky
OP

Another stream coming up for you German-speakers... Gura almost never streams at this time.

The German teaching stream is starting off amazing.

Something special for those of us watching the AmelIna Hat in Time collab.

Congratulations to Ina for getting good and beating the Radiance ~40 minutes into stream 8.55

Did Ina beat the Colosseum? I think I have more trouble with that than the rest of the game lol, it's the only thing I didn't finish (not counting the DLCs)

I think she beat the first two parts but not the third. After Radiance she also did Grimm (#1).

Personally, for me the hardest non-DLC part was the Radiance fight, more difficult than the Colosseum.

One of the outfits has glasses . Fubuki is gonna be ecstatic.

This was a great collab.

Korone: screams
Okayu: "Where are the goats?" (*Collecting goats is one of the objectives of the game)
Lamy: screams because of Korone's screams
Botan: wheezes

This guy needs to get Okayu, Korone, Botan, Lamy livery on his plane!

edit: Ocutan VR Ch. have been covering Vket, they have videos up and they're live now:
OcutanBot VR Ch. - Videos

Nice subbed compilation with a lot of perspectives: 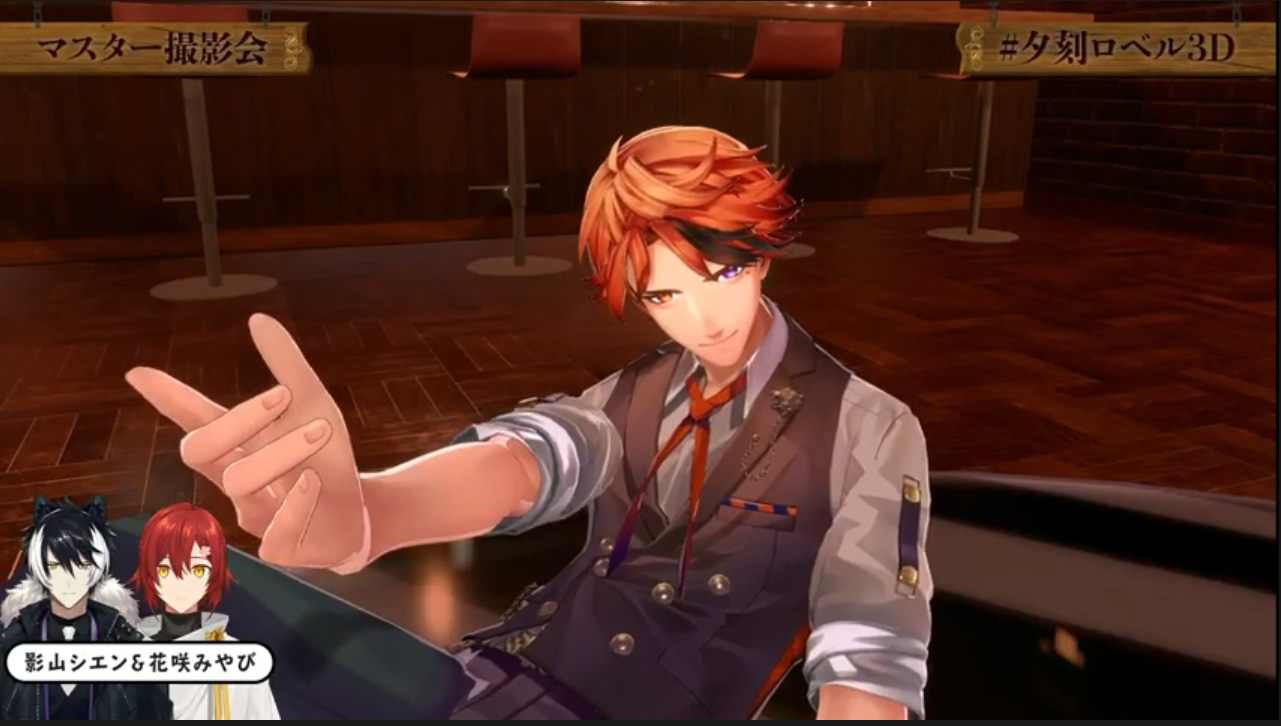 Ha, i was waiting for someone to import the Hololive MMD models into Smash

I can't stop chuckling at this. Risu the madlass has been running a "Whistle Only" stream for the last hour.

AZki, in an effort to reach out to overseas viewers, will be doing her first ever English stream.

In other English vtuber news, today marks half a year since Holo EN debuted and there will be a collab stream. Where does the time go?

Well, looks like i'm going to be setting an early alarm for tomorrow's AZKi stream then.

I did wonder what shape HoloEN would take over time and for me i think they're doing great. They are different enough that there's someone for everyone and they collab together well. I'm looking forward to what's ahead for them and the new HoloEN AZKi type music focused role and the HoloEN "Gen 2" crew. It seems longer than 6 months to me though, wow, times flies.
It's interesting to see that HoloEN management have a different style to HoloJP in tha they see the girls as entertainers first where HoloJP have a focus on the Idol thing. Also, HoloEN won't have official generations but i'm sure the fans will refer to them as such because it's easier.

Steam Workshop: Don't Starve Together. Hololive Character Mods for Hololive Fans! What else do I need to explain?? We'll add more characters in the future! Not just HoloEn.

Also, a lot of hololive english merch coming. Keychains, acrylic stands, plushies, and weirdest of all..... an "image soundtrack" of music inspired by the Hololive members, written by someone else.
Last edited: Mar 13, 2021
Reactions: Rockin' Ranger, Kvik, ExistentialThought and 1 other person

Steam Workshop: Don't Starve Together. Hololive Character Mods for Hololive Fans! What else do I need to explain?? We'll add more characters in the future! Not just HoloEn.

Also, a lot of hololive english merch coming. Keychains, acrylic stands, plushies, and weirdest of all..... an "image soundtrack" of music inspired by the Hololive members, written by someone else.
Click to expand...

Yeah, i wanted to try to get the Penta-Keychain but Geekjack was being trashed last night. I'll see if there's any chance to pick them up today.
Also, missed my alarm and missed AZKi's English stream this morning so i have that to look forward to this afternoon.

edit: After some shenanigans with phone number i have put an order in at geekjack for the HoloEN keychain, Miko Badge, Aruran & Roberu socks (Wine and Pizza!). I reckon they'll be delivered in 2022 and UK customs will charge me 2 kidneys, both arms and a leg.
Last edited: Mar 13, 2021
Reactions: Kvik, ExistentialThought and Mutant Strawberry

can't wait for pikamee's stream, i wonder if she'll still have a schedule moving forward. (update: guess she'll put up a schedule tomorrow!)

A highlight clip from one of the best rounds in last night's Amogus collab. I managed to watch this particular round live and it was a lot of fun. Poor Miko though, lol.

Kvik Have Coco and Danchou done their singing collab yet? I was watching some translated clips of Meme Review and remembered that they had said they'd do a collab together sometime soon and that was a few weeks ago so i wondered if i'd missed it.

Here's AZKi's first English stream from the weekend, which i haven't watched yet.


Azki posted a message on her youtube community raving about the Hanafu "Impossible 2Q2" free concert that was on this weekend.
She LOVES Kamitsubaki Studio and the artists there but i think Kaf is her favorite. In fact i'm sure of it as AZKi is such a fan-girl when it comes to Kaf.
It's obvious AZKi loves VSingers and VTubers in general which is why she hosts the "48 Hour VSinger Weekends" but did i mention that she adores Kaf? lol.

Hanafu played the "V.W.P. - Virtual Witch Phenomenon" debut trailer at the free live show and it looks like something fun to keep an eye on.

Also, This is a great clip. I haven't heard Kanata laugh so much in ages, it's great to hear her so happy.

Nyanners has a new haircut.

Marine singing BLOODY STREAM will always captivate me. She always picks great tracks in her "singing anime songs" streams.
PH Jingo has a comment ( Top Comment #7) with the full track list and links into the stream.

I always have to convert Samurai-X to Rurouni Kenshin which is how i know the series and Sobakasu (Freckles) will always be one of my favourite tracks ever.

EdwardTivrusky said:
Have Coco and Danchou done their singing collab yet?
Click to expand...

Nothing has been scheduled, at least until 17/3 based on Kaichou's schedule.

I just saw this clip, it's hilarious:


The part where Choco stays in the fire on purpose and Pekora rapidly chucks potions at her in panik is fantastic
Reactions: EdwardTivrusky and ezodagrom

Gura on the language learning boat too

AZKi and Roboco battle through Youtube SEA's issues and play Minecraft then Sora joins later on. Just a nice, chill stream.
AZKi, Sora, Roboco all together playing Minecraft and chatting. This is a rare event i think? If only Miko and Suisei had joined too then it would have been the full OG Hololive Crew together.

Aqua's Apex stream so far hasn't been having issues, I assume due to her using a bigger stream delay, resulting in more headroom to avoid buffering even with the youtube issues (Aqua is using normal latency, which has around 20~30 seconds delay, while others usually use low or ultra low latency, which have less than 10s delay).

Man almost nothing loads on my end, I'm just watching Ollie's minecraft stream because that's surprisingly the only one that ended up loading.

I was just going by what chat said in the AZKi stream. I couldn't connect to Sora's Minecraft or Ollie's Apex stream and Mel's Apex stream took a dog's age to start. Chat was saying that Youtube SEA was having issues and some streams were laggy, some were broken and some were fine. I've no idea what settings etc they were using but all the western streams were connecting and playing fine for me.

Looks like youtube is still lagging in some regions today, Pikamee had to stop her stream early today, and I couldn't load some of Nijisanji ID streams.
Reactions: Panda Pedinte, ExistentialThought and EdwardTivrusky

An accurate depiction of the most recent Amogus collab.


I didn't manage to catch Botan's Loop Hero stream last night, been so tired lately for some reason.

Oh shit, VOMS monsters are getting their new forms tomorrow.

Looks like Pikamee is gonna turn into Bowser.
Reactions: EdwardTivrusky

Wow, i can't believe VOMS is only around 1 year, same with HoloEN and 6 months. It feels like they've been around for years to me.
Here's to more years!

HoloEN had an Uno collab. That's getting played this afternoon while i'm working.

Anteater said:
Looks like youtube is still lagging in some regions today, Pikamee had to stop her stream early today, and I couldn't load some of Nijisanji ID streams.
Click to expand...