Inspired by the original 2020 thread by Le Pertti, I wanted to create a thread where we show off our gaming setups. It's been near enough two years since we last did this, and I'm sure some of us have nice new setups that we want to share with the world.

With that in mind, I'll go first. 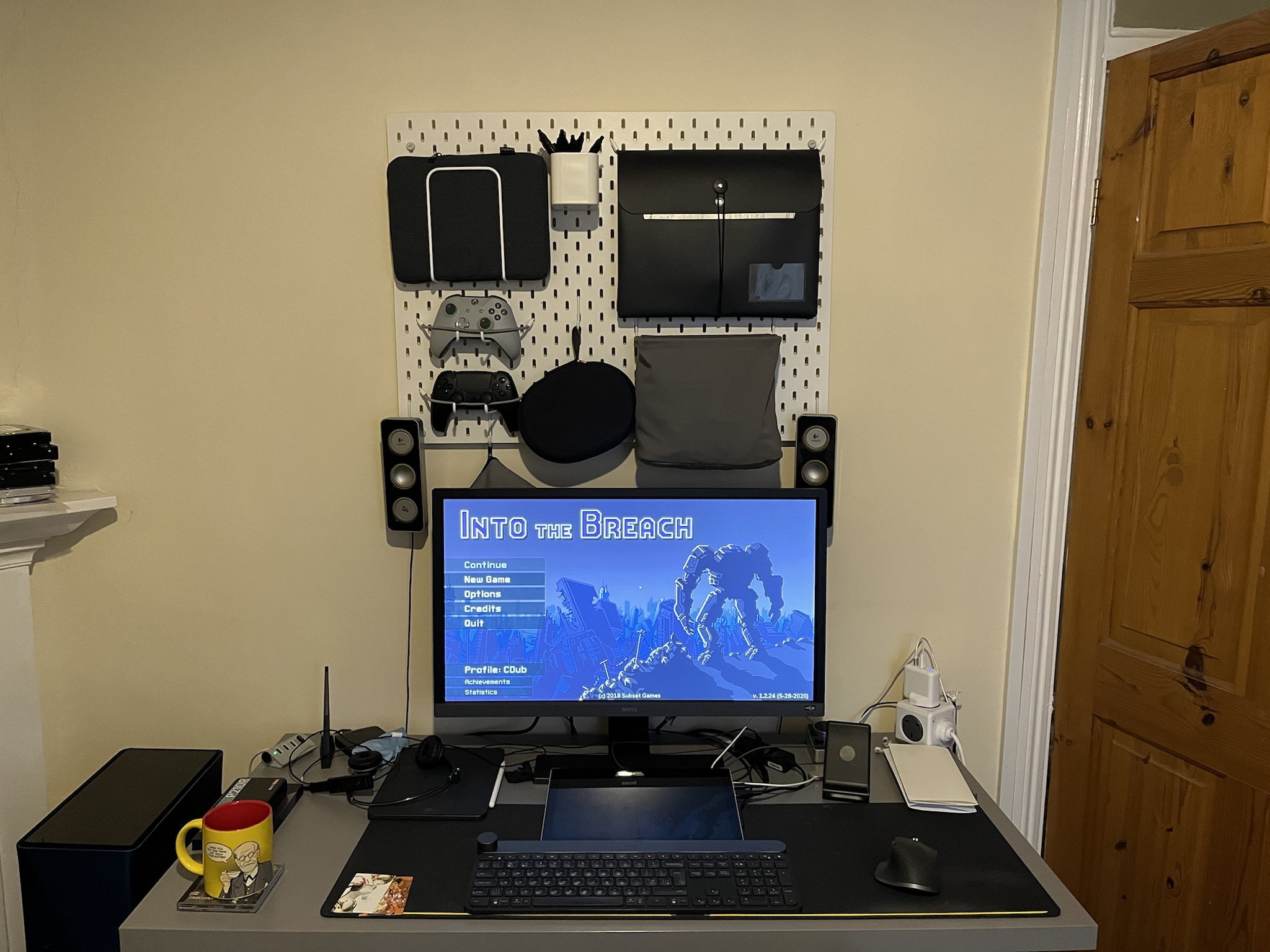 This is my desk. I mostly do work here. My work Surface Pro sits flat against the desk when I'm not using it (like now) - instead I am using my mini-ITX PC.

It's a pretty basic setup just for writing and browsing:
Core i5 11400
8gb RAM
512gb Gen3 NVMe
Windows 11
Integrated graphics
Fractal Design Era ITX Case (I know it's not good for airflow, but for my needs it is fine)

The keyboard is the Logitech Craft, and the mouse is the Logitech MX Master 3, both are wireless. I use these because I can switch between three devices, which is good for working from home using multiple computers.

The monitor is a BenQ EL2870UE 28" 4K monitor. I bought it mostly for work as I do a lot of work that requires a large amount of screen real estate, but the integrated graphics on the CPU drive the monitor fine for desktop and 2D gaming.

I use an Xbox One controller with this PC. I also use the IKEA Skadis pegboard to store my black DualSense controller which I use with my iPad for Remote Play.

I have been considering putting a cheap GPU in, but that's all contingent on me being able to get a 3050 or 3060 any time soon. I don't want to do any hardcore gaming on this, so the graphics acceleration would be more geared towards making everything run a bit smoother. 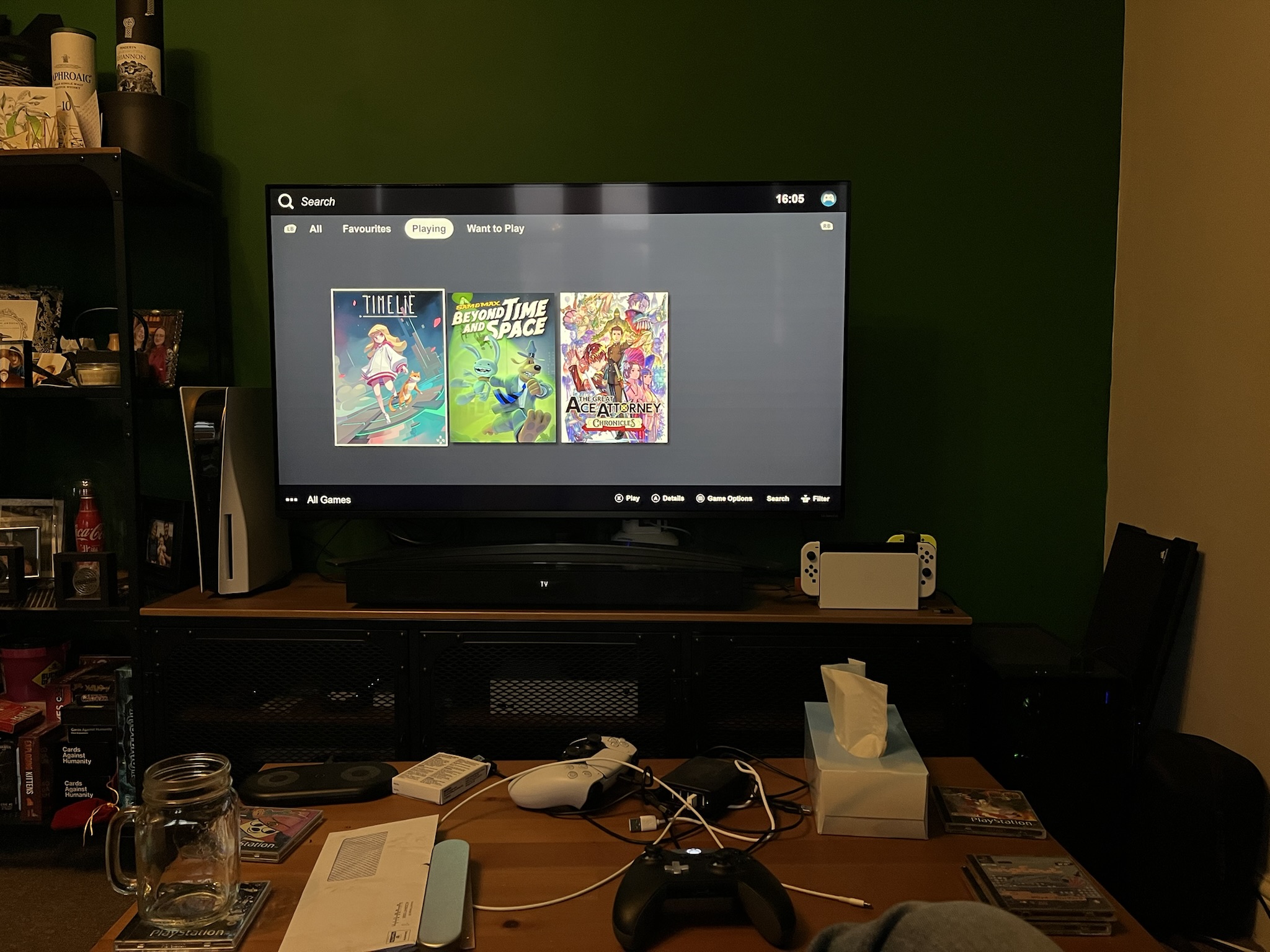 This is my gaming setup. The PC is hooked up to the TV for comfy couch gaming.

The big picture UI is Playnite, but it's using the in-beta Playnite Deck skin that takes design cues from the Steam Deck UI.

I have a Logitech K400 as a quick keyboard for when I need to get "under the hood" on the PC.

The PS5, Xbox Series S and Switch OLED use their respective controllers (I have 4 joy-con and one Pro Controller for the Switch - I also have a Wii U Pro Controller hooked up to it).

The PC has 4 inputs that I use depending on the game:

For batteries I use Eneloops.

All the devices seen in my TV setup are wired by ethernet to my network, which makes download and remote play streaming work nicer.

How has Metacouncil improved their setups since we last did this?
Reactions: Kvik, 「Echo」, fearthedawn and 3 others

I feel like my S10+ should be taking better quality pictures but maybe i'm doing something wrong. Here be my dark desk corner. Well it's not always dark. I have a big ol' 55" TV in the other corner, and if I turn that on and passively watch things of course the room is plenty lit. Plus it's almost 4AM and the sun is down, so no passive sunlight buff. But just posting the "battle station" for now. Don't mind the mess and all the pill bottles. Ever since Cancer I'm on so many meds I just leave the frequent ones at the desk these days where i spend most of my time anyway.

PC Under the Desk:

Built this in June of 2018 when the RAM shortage was walloping wallets. Since than I've added an NVME (1TB Samsung 980) and replaced the Keyboard with a newer Logitech G Pro and the mouse with a Logitech 502 Hero.

The Monitors are 2x DELL S2721DGF. (HDR and G-Sync, 165hz)
My controllers are a DS5, and 2x Xbox One pads I swap between as needed with Eneloop batteries. 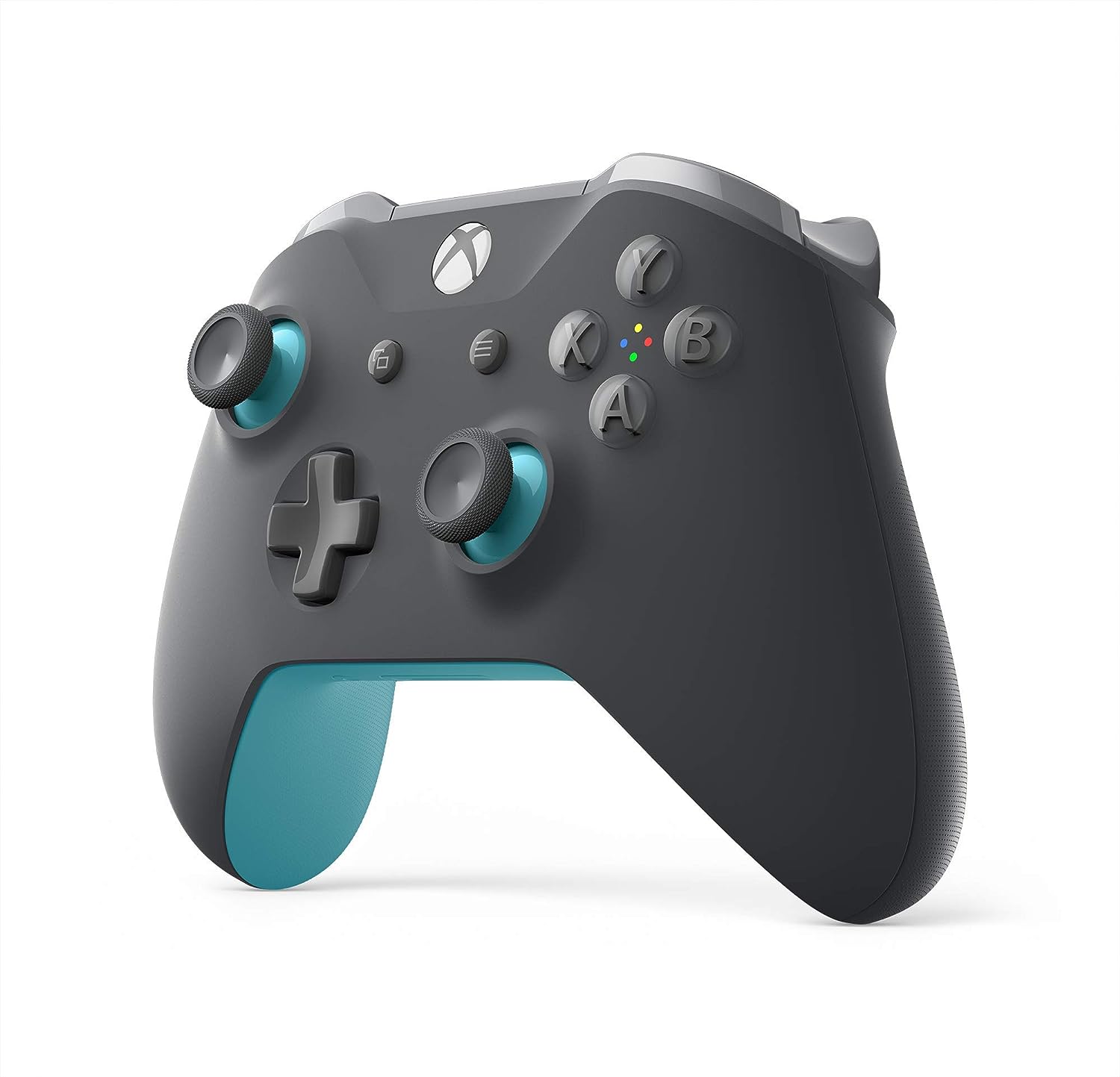 Speakers: Logitech Z623
(I have them neatly hidden under the raised part of my desk which the monitors sit on. And the big ol' Subwoofer also sits comfy under my desk.) 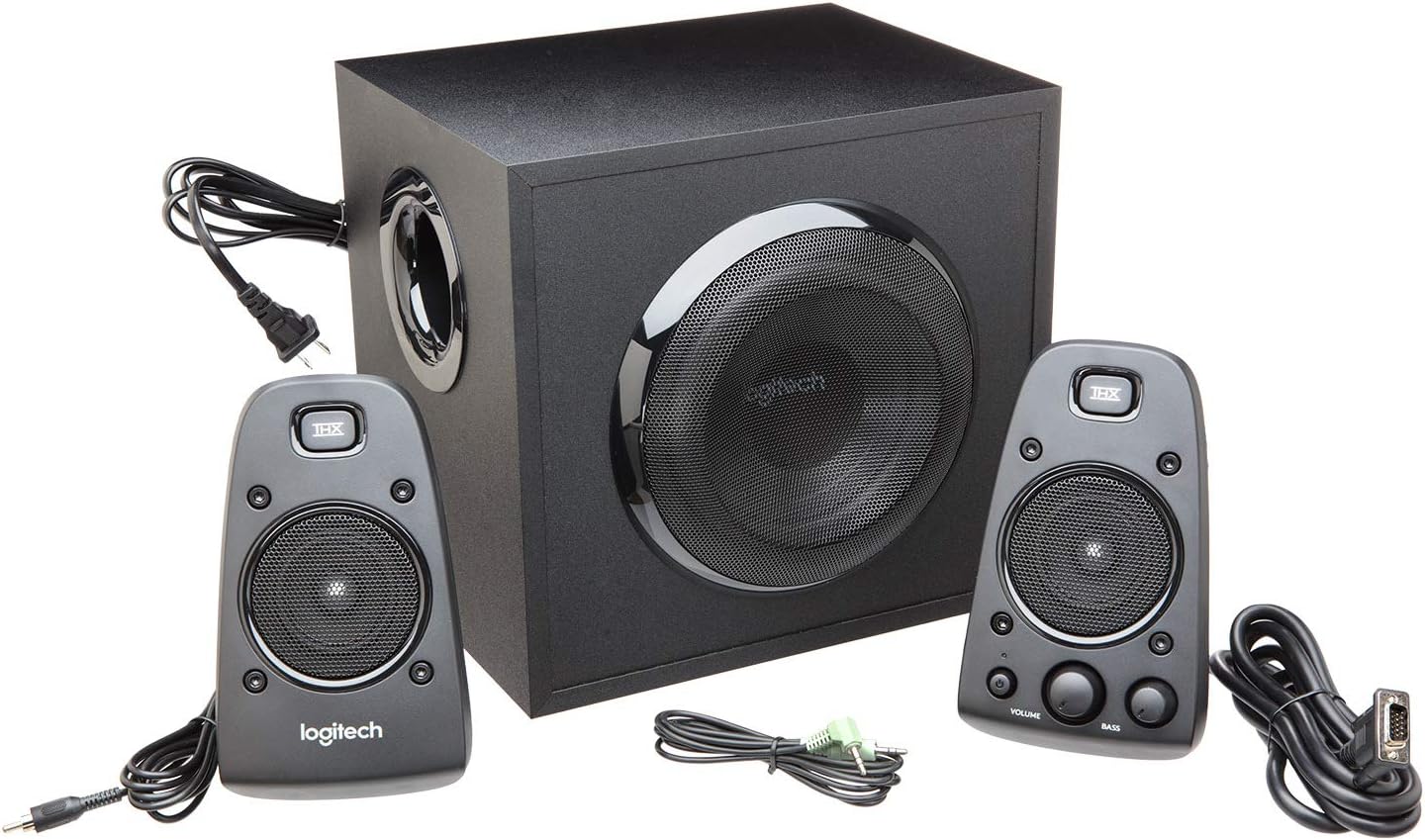 Headphones: The Legendary Sony MDR7506 Professional (I love these things! Audio quality that is so clean it feels like cheating in Multiplayer games.)

My neat little clock/calendar thing. Tells me time in 24 hour format, the way i like it, and despite living in America it tells me the date in my homeland Japanese format. Yay!!

And the little black stand in the bottom right is actually this: HORI Compact PlayStand

Now it's meant for Switch, and I did use it for that at one time. But now my Switch is plugged into the TV, because handheld mode is... really rough graphics. So I use it to dock my phone instead while I'm at the desk. (Phone not pictured however since I needed it to take this picture!).

Many of my things are blue. I love blue.

So I have upgraded a bit! 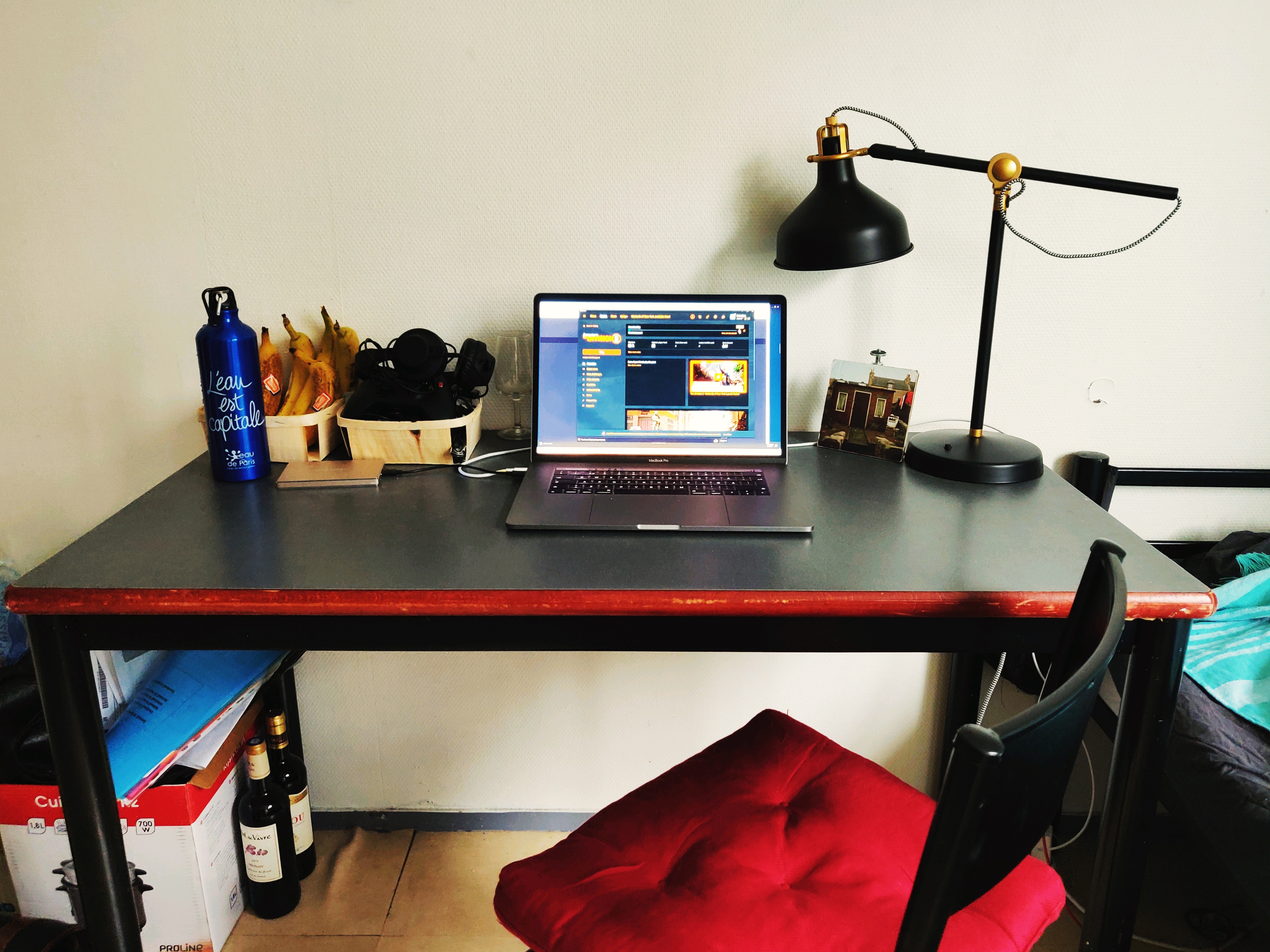 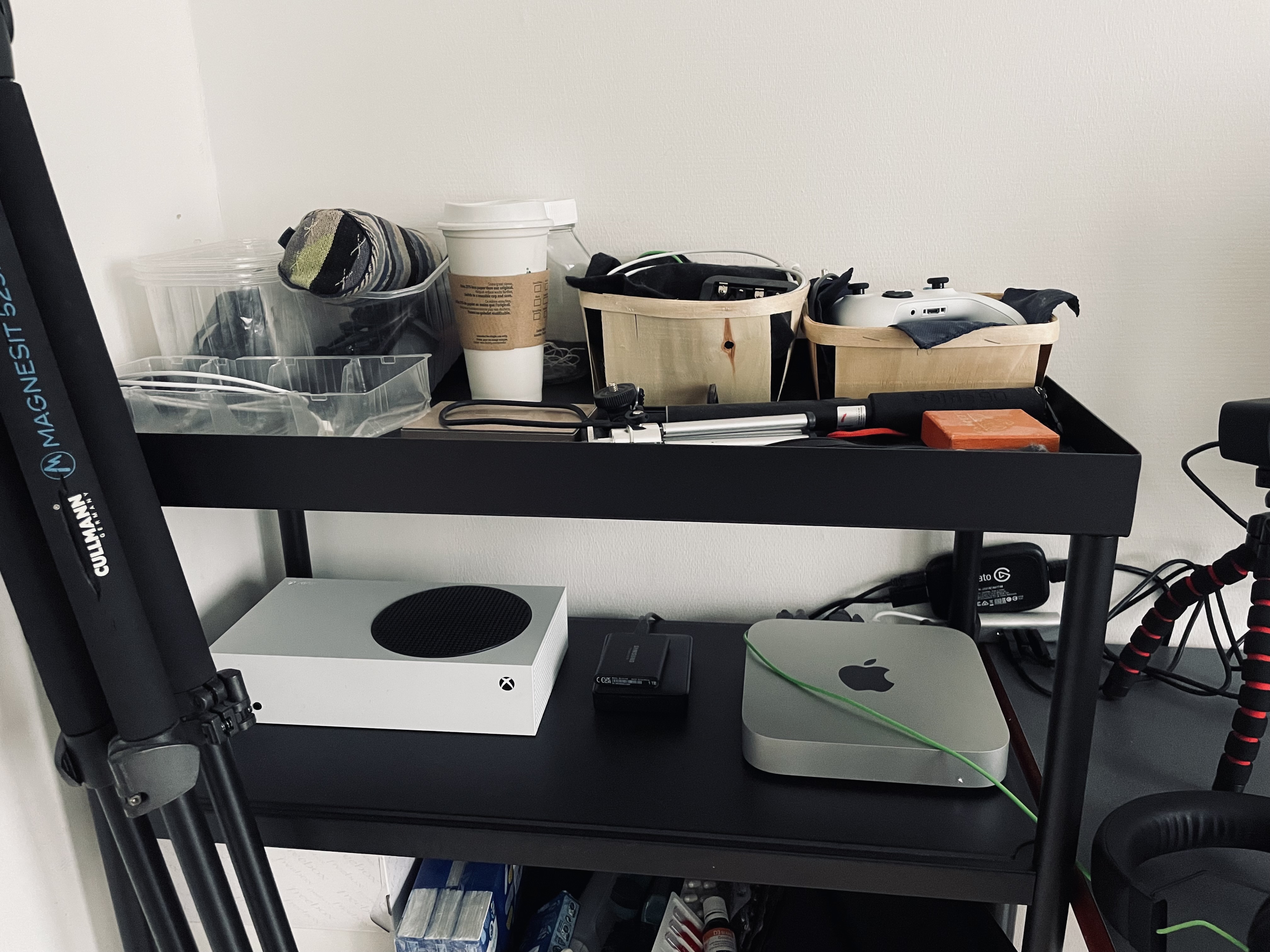 Biggest changes of course getting a proper screen, xbox series s and a Mac mini. Laptop is now only used in bed watching movies.

I still need to organise my gear shelf a bit better! And I won't bother with cable management until I have a real apartment to call my own and know I will be there for a long time.
Reactions: EdwardTivrusky, Stevey, C-Dub and 1 other person

Don't hink anything has changed since my last post in the old thread, but here's my gaming room.

Cozy setup!! We have the same speakers!! (I think.)
Reactions: Stevey

Cozy setup!! We have the same speakers!! (I think.)
Click to expand...

I’m surprised there are people not aware of the Mac mini. It’s probably Apple’s most versatile Mac, and with the M1 chip they’re also pretty damned powerful too.
Reactions: Le Pertti

C-Dub said:
I’m surprised there are people not aware of the Mac mini. It’s probably Apple’s most versatile Mac, and with the M1 chip they’re also pretty damned powerful too.
Click to expand...

I'll just say the last time I was exposed to a Mac, it was in grade school and they had big transparent backs. They looked like uhm, those TV's that used to bubble out lol.
Reactions: C-Dub and Le Pertti

My lounge room setup. Please excuse my poor excuse of mobile camera and rough cable management. This was taken last year around Black Friday, shortly after I bought my LG C1.
My PC is on the right side of the TV bench. Sadly it's been cut-off due to how I took this picture.

On the coffee table:

Cozy setup!! We have the same speakers!! (I think.)
Click to expand...