Buried in their FAQ for the recent changes to the service.

Note: The Humble app is only available for Windows PC.
Click to expand...

Inactive members will not be able to launch HGC games.
Click to expand...

Much like Steam, not every game requires the client running to play. But they rather clearly differentiate this in the FAQ, explaining that only the "vault" titles (Which were smaller-scale games made specifically for Choice.) function this way.

The Vault: The Vault will include over 50 Humble Original Games. Once downloaded, these games can be kept forever regardless of Choice Membership status.
Inactive members will be able to play those Vault games that they have already downloaded.
Click to expand...

The e-mail sent to choice subscribers is far more definitive. Mentioning the client requirement alongside the complete removal of Mac & Linux support. 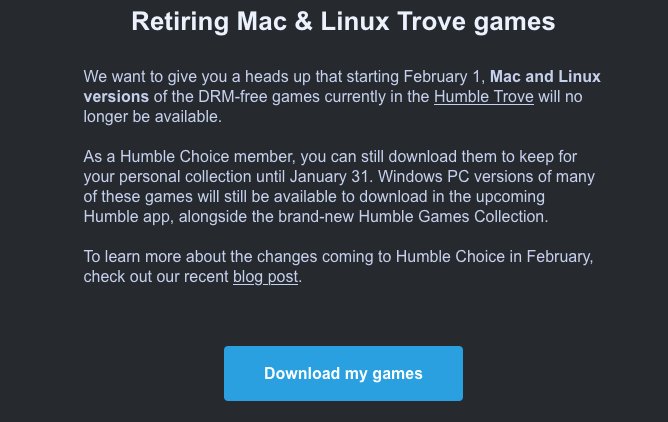 This marks the most damning moment in Humble's downfall from focusing on curating collections of fully cross-platform and fully DRM-free games, to effectively being just another Steam key seller. The original team that started it once described DRM as "not just bad from a freedom point of view -- it is simply bad business", and reminded people that not supporting Mac and Linux "leaves a lot of cash on the table.".

But said studio, Wolfire Games. Split it into it's own company after the second bundle began. Eventually leading into the beginning of the end.

It all started here, The THQ bundle marked the first time the included games were only accessible through Steam keys. It made a bit more sense when you consider THQ's financial state at the time (they filed for bankruptcy exactly a week after it ended.) rendered them unable to provide the standard DRM-free and cross-platform options. But it opened the floodgates for any big publisher to hop on the train.
(thankfully, a few of the companies that picked up the pieces from the bankruptcy continue did some basic work in providing a few of the games in cross-platform or DRM-free form. Though obviously adding it to the original bundle was out of the question, and getting both options is still extremely rare.)

Humble was eventually acquired by IGN, one of the largest gaming websites in the world, in 2015.
and the original founders, the sole remnant of the days it was just the side project of a small indie studio, left in 2019.

The excuse of "It's still going to charity!" has been completely kneecapped by a percentage cap that requires some of the money to go into Humble's pockets. Removing another advantage of buying from them.

One other important thing to bring up, which doesn't just apply to Humble. Is a question that's going to become incredibly frequent in the coming months.

Why not just use Proton or WINE?

While the Humble app most likely will work this way, they're still fundamentally killing off native support by doing this. A situation which isn't helped by Valve themselves lightly discouraging devs from making native ports and just letting Proton do the work, creating a knock-on effect of devs just giving up completely.

The creation of native Linux ports has led to numerous improvements towards game development in general. Such as the creation of FNA, a library that reimplements Microsoft's discontinued "XNA" framework in a fully cross-platform format. Allowing titles originally created using it to be preserved for years to come.

Another great example of libraries getting fixed up for better cross-platform support is Wwise, Limbo rather infamously launched on "Linux" in the form of a WINE wrapper. Which was eventually repaired in 2014 thanks to Ryan Gordon manually porting that library to Linux.


In general, i feel like defaulting to Proton over a native port should only be used as a last resort (E.G. The Source Code is missing, it's built too heavily on Windows exclusive libraries.) rather than the end-all solution that Valve wants it to be for the Steam Deck. Especially considering that pretty much all of the modern game engines out there have an option to compile to Mac/Linux.
Reactions: LEANIJA, Pommes, m_dorian and 1 other person

Having their own separate launcher to access Humble Trove seems like pointless bloat and arguably more friction to downloading titles, but if there was ever a time to consider getting rid of Linux builds, why now when the Steam Deck is right around the corner? Will the Steam Deck move the needle for the Humble Trove? Probably not, but removing it now removes any possibility of finding out over the next few months.

I already cancelled my Humble subscription due to the discount changes. I was pausing this month which is something I very rarely do unless I own a high % of games in the bundle. With the discount changes, it will impact me since they say only folks going into next month with an active membership will still have the 20% discount, everyone else will need to build back to up the 20% over 12 months. I buy a decent % of my games through Humble because of the discount and this change makes them in-line or worse than other key sellers.

I have been subbed since December 2016 and only paused a few months in total (maybe 4 or 5 times), but between all of the changes over the years, I am just not sure what Humble is thinking. I will not completely write off buying bundles for them in the future, but it looks like it is going to be fewer and farther between.
Reactions: Ge0force, C-Dub and Krvavi Abadas

I always thought of Humble as a "key reseller." Now, there's no confusion.
Reactions: LEANIJA

This will probably be the last time i had with them.

Phoenix RISING said:
I always thought of Humble as a "key reseller." Now, there's no confusion.
Click to expand...