They always do. It’s cool, however.

This looks amazing, it reminds me of an Anime I watched ages ago about the after effects of a major earthquake (I cannot remember the name right now).

sprinkles said:
This looks amazing, it reminds me of an Anime I watched ages ago about the after effects of a major earthquake (I cannot remember the name right now).
Click to expand... 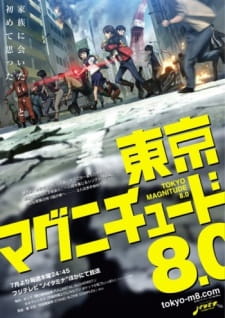 Middle school student Mirai Onozawa is dissatisfied with her family circumstances and, in a moment of frustration, wishes to tear everything apart. Unfortunately, these destructive thoughts seem to come true in the form of a magnitude 8.0 earthquake just a few moments later. When summer vacation...

I always wanted to give this game a try, and finally I will.
I love this kind of "leftfield" Japanese games, that we sadly rarely get any more.
Reactions: MegaApple and lashman

When it comes to a western release for Disaster Report 4, one has always been in the back of the developer’s minds. Even back in the days of development at Irem, Kujo-san confirmed that “it was always planned to be released in the west.” Once the project’s development was revived, Granzella still “wanted to release the game overseas.” The biggest obstacle in doing so was finding the right partner to bring the game over.
..
As for how Granzella thinks western audiences will react to the game and its distinctly Japanese setting, they actually seemed unsure. “We are half expectant and half hesitant. It might be a little too Japanese,” he told us. That being said, the success of Disaster Report 4: Summer Memories in the west will be very important if fans want to ensure future Disaster Report titles, or new Granzella titles in general, make their way to the United States and Europe. “We will be surveying the Western fanbase, and plan to put out something to gather their opinions.” Releases like this and the recently crowdfunded R-Type Final 2 are “part of that plan.”

Kazuma Kujo also told DualShockers that Granzella and NIS America do not plan on removing, changing, or censoring any content in the western release as of now, but he did say that “as localization progresses, things that need to be changed may appear.” The western release seems to be the end of the road for the long development saga of Disaster Report 4: Summer Memories, and Kazuma Kujo and co. seem quite happy about being at that point. “It may have a slightly different feel for an adventure game, but we want you to experience the events of a major earthquake, the situation of the city, and the actions of the people in it. We hope you enjoy Disaster Report 4: Summer Memories.”
Click to expand...

Disaster Report 4: Summer Memories - How the Disaster Game Was Revived and Brought Westward

12 hours of sleep every night and still feel tired

This game is as PS3 as they get btw.
I watched full playthrough(s) and at points it shows it age so bad it was hilarious.

When everything crumbles away, all that will remain will be the choices you've made. What story will you tell? How will you be remembered? What will be the cost of the choices you make? The lives of many depend upon you in Disaster Report 4: Summer Memories!
Click to expand...

In Disaster Report 4: Summer Memories, every action you take and decision you make matters! Interact with various people, explore hazardous areas, and navigate your way through dangerous scenarios in order to survive!

Available on April 7th, 2020 for PlayStation 4, Nintendo Switch, and PC.
Click to expand...