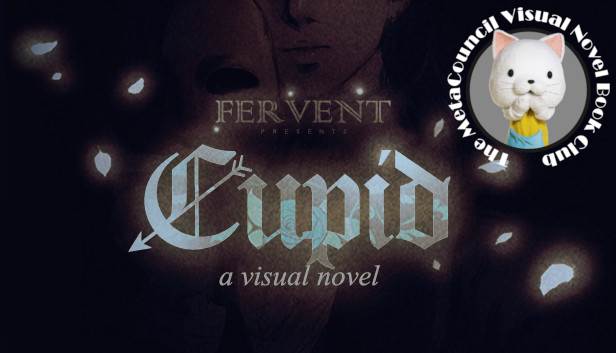 
For this book club we will be reading CUPID, a short and free visual novel about love and revenge. Please note that while CUPID is not an 18+ title, the developers warn that CUPID contains disturbing imagery, violence, flashing images, sudden and loud noises, mature themes, and strong sexual content.

Bookclub participants can obtain CUPID on Steam and on Itch.io. The novel is approximately 62k words in English and a completionist play-through is estimated to take 6 hours on HLBT.

This is an informal book club, so there is no fixed schedule; you simply read the novel at your own pace, and share your thoughts along the way or when you are done reading. Just remember to use spoiler tags liberally. For general information and past and future book clubs, please see the main MetaCouncil Book Club thread; the main thread includes a preliminary schedule for the rest of 2020, but suggestions are very welcome for the rest of 2020 and beyond.​

"Love is both poison and cure, both knife and remedy."

Rosa's best friend, Catherine, is dead and she is sure Catherine's betrothed, Marquis Guilleme is to blame. Mother says so. Mother says he has to pay with his life. Although, she knows by now Guilleme is no ordinary man. He is tainted. Inhuman. A monster. He cannot be killed by usual means. To seek the best revenge, she must find out all his secrets and destroy him. But will her own dark desires consume her or liberate her?

Mother will tell her what to do.

Set in the romantic 18th century France, play as the third person point of view character of Mother — a unique twist to the visual novel decision making medium. Decide the fate of the characters, scold or console, argue or assent... Just don’t be surprised if they start to question your commands.

A walkthrough and achivement guide for CUPID can be found here.​

The currently scheduled visual novel for August is The Silver Case (VNDB), a murder mystery in which the protagonist faces off against an infamous serial killer, and the debut title by SUDA51.

The Silver Case, along with all other titles planned for 2020 bookclubs, is currently discounted on Steam:
​
Reactions: Mutant Strawberry
OP

So after an immense amount of procrastination, I finally started reading CUPID and it has been very interesting so far. For those not already aware, the character you control in this visual novel is not the main character, but rather the disembodied voice of her mother. While it still follows the traditional "pick a dialog option" game-play, the fact that you do not directly control the main character's actions is rather unusual and gives the story a unique feel.


So far, the newly christened Rosa was taken in by Catherine, Guilleme started a relationship with Émilie, who was subsequently killed by Catherine, and then Catherine hanged herself.

There are obvious questions about the reliability of the both narrator and the main character. Is her mother's voice (you) real or imagined? In particular, the scene in which Rosa tries to perform magic on Guilleme but ends up coughing up nails made me wonder if this was actually a result of the magic or if it was perhaps another self-destructive act by Rosa, akin to her piercing her own eye. Is magic real in this story or imagined?

I had actually intended to split my reading of CUPID over a couple of posts, but it ended up being so gripping that I basically binged the rest of it. Whoops. Overall it was a really enjoyable read, with a very creative approach to main character agency.


I had questioned whether or not what Rosa was seeing was real in my last post, but it quickly became apparent that magic is indeed real, and Guillime was indeed more than human. However, I am still left with questions about the nails that Rosa throws up. The rest of the story does not seem to feature Guillime himself engaging in arcane arts, not counting acts of feeding, which makes it seem odd that he would have such a defensive mechanism and (in addition) not detect Rosa's prodding at his defenses. Perhaps there was something I missed.

While I am rarely impressed with sex scenes in visual novels, the one between Catherine and Guillime was really gripping, especially as the predatory side of Guilleme started to emerge. The dream/nightmare sequence that Guillime experiences near the end was similarly well written (and rather horrifying).

The nature of Mother ended up being a bit ambiguous. On one hand, several endings have Rosa explicitly state that Mother is merely something she is imagining, but others seem to strongly imply that Mother is meant to represent a distinct entity, namely the player (including a 4th-wall achievement). Mother also seems to have been Rosa's first and only victim as a love-eater.

Rose and Mother's relationship to Guilleme still seems a bit unclear after the end of the story and after unlocking Mother's "origin" story. Mother, or Rose, carries memories of one of Guilleme's former names (Florian), which is not mentioned elsewhere else. If we go by Guilleme's journal, then perhaps Mother was the woman killed(?) in the revolution mentioned there. However, Rosa(?) also claims to be the product of Guilleme's victims ("I am every victim you devoured, every life you laid to waste!"), and overall I am not much wiser after having read through the script for places where Mother's origin is talked about.

But while I ended up with a number of unanswered questions, part of which is no doubt the intention of the authors, I found CUPID to be a really interesting read, and one that managed to be extremely gripping in many places. It is an interesting example of just what you can do with the Visual Novel medium.
That's it for me this time around. Next month's thread, for SUDA51's The Silver Case, will be going up on the 1st as per usual.

I just got an ending! Wow, really wasn't expecting it to go there. It took a while for this VN to click with me but it becomes amazing in the end. Don't sleep on this. It's free and 6 hours long so you really have no excuse.
Reactions: Rockin' Ranger and Exzyleph

Got all the endings now! Definitely recommended.
I have all endings / achievements but still only 96% complete and some CG missing in the gallery... what up with that?
Last edited: Jul 31, 2020
Reactions: Rockin' Ranger and Exzyleph
OP

Mutant Strawberry said:
Got all the endings now! Definitely recommended.
I have all endings / achievements but still only 96% complete and some CG missing in the gallery... what up with that?
Click to expand...

Looking at my own save, I'm guessing that you are missing the "all ages" CGs;
Basically they are the previous image in the gallery, but with less blood.
Reactions: Mutant Strawberry

Oh, that makes a ton of sense! Thanks
Reactions: Rockin' Ranger
OP

The 12th VN Book Club thread is now up and this time we will be reading The Silver Case by SUDA51: 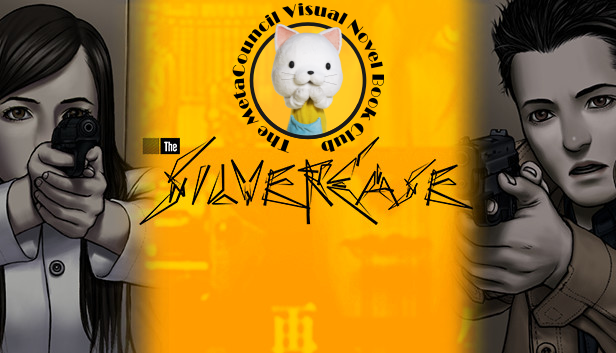 ​
Thank you to everyone who joined in reading CUPID!
This thread will of course remain open, and I hope that you will still share your thoughts if you are not yet done reading CUPID or if you find this thread at a later date.
You must log in or register to reply here.
Share:
Vk Ok Blogger Linked In Diaspora Weibo Facebook Twitter Reddit Telegram Viber Skype Email Google Yahoo Evernote Xing Link