d00d3n said:
I love these kind of games, but Comet 64 level design is broken. In one of the first levels of the game you are supposed to send double entries from an input list to an output list. The listed elements are years. The solution should have been simple enough, but my attempts failed repeatedly. It is really difficult to debug in this game, but after much effort on my part I was able to figure out that my solution failed due to the integer and floating point registers not being able to handle "null" values from the input list.

However, it does not make sense that "null" values should be included in the input list, the game does not give any hints that "null" values will be included in the presentation of the problem, and the visual preview of input values only shows a couple of years. Additionally, my first input list did not include "null", which made it possible to complete the algorithm in one run. This is outright bad puzzle design in one of the first levels of the game, which does not give the best impression. Add to that silly game design choices like forcing the player to add semicolons after each line, and you have a pretty annoying game on your hands that makes you long for the design magic and quality seal of a new Zachtronics game.
Click to expand...

Seems like it's a far too realistic commercial programming simulation. Underspecified inputs and incomplete testing data, with everything breaking in production and being hard to debug
Last edited: Mar 18, 2021
Reactions: Pommes, d00d3n, Exzyleph and 1 other person

Wake the fuck up, Samurai

Just played through the demo for this. I really liked it! It almost feels like an actual Zachtronics game. Going through the levels, I was worried about it being way too easy but at the very end you unlock an optional level that actually took me a little bit of time to work through, so hopefully that means the full game will ramp things up once you're out of the tutorial phase.

Probably going to buy it day one because I really miss Zachtronics games. Two of their recent releases weren't even puzzle games and I bounced off Molek-Syntez pretty quickly. I should probably give it another shot but I really hope they're working on something more like Shenzhen I/O and Exapunks...
Reactions: Pommes, Exzyleph and lashman

toxicitizen said:
Just played through the demo for this. I really liked it! It almost feels like an actual Zachtronics game. Going through the levels, I was worried about it being way too easy but at the very end you unlock an optional level that actually took me a little bit of time to work through, so hopefully that means the full game will ramp things up once you're out of the tutorial phase.
Click to expand...

I spent a couple of hours playing A = B. The setup is that you are a student in a programming class who decides to bend the rules of an assignment by completing it with a really simple programming language of your own design. To begin with you have to solve increasingly complicated problems with the single function included in the programming language: the A=B function that transforms one string value to another string value. You are doing this to convince your skeptical professor that you were serious with your submission, rather than a lazy student who missed your deadline ...

The game is presented as an email thread between you and your professor. You provide pdf course reports which describe the features of your programming language, very similar to how manuals are presented in Zachtronics games. At the start of each "chapter" your professor presents a new type of problem that reveals a limitation of your programming language, which leads to you sending in a new pdf course report describing additional patchwork language features.

The focus on basic string manipulations to solve problems makes the puzzles quite different from any of the Zachtronics games, or any clone that I have played. It may be disappointing to Zachtronics fans that no "cycles" metric is being tracked, and that no leaderboards are provided. However, the number of lines of code is tracked and a challenge threshold is provided for each level, which can be kind of fun to optimize around. The story framework is basic, but thematically fitting considering the types of puzzles that you solve, and kind of entertaining. The game is in early access, but seems pretty much complete in most important ways.

This seems like one of the better Zachtronics clones. I would recommend the game to fans of the genre!
Reactions: Exzyleph, Pommes, fearthedawn and 1 other person
OP

I've been AAW for a bit and impressions are positive so far, with some important caveats:

The presentation is nice and the game has some neat features that I'd like to see in other Zachlikes, such as the ability to select a test-case as your current view/input and a backlog that makes it easy to explore past conversations (it's a bit hard to explain, but fits the structure of the game well).

Another (smaller) issue is that game doesn't really seem to know who its audience is: While you do everything through GUIs, as described above, the resulting operation might be represented as MyWriter.write(1). This is easy enough to read if you have programming experience, and would be just as easy to write for somebody with that kind of experience. On the other hand, a person who needs the GUI to help them do things probably won't be familiar with that kind of syntax. So who is the UI for? It also feels anachronistic to have OO'esque programming in a clock-punk'ish game, but that's a very minor complaint.

But given the cheap price it is probably worth giving a go even if it doesn't hold up in the end.
Last edited: Jan 27, 2022
Reactions: Durante, Pommes and d00d3n

Last Call BBS is the new game from Zachtronics, set to be released July 5th. It is a bit hard to define, but seems to fall into the programming puzzle game genre? Although probably not text based programming? It has a fast forward button, though ... Link:

Sadly it's the last game from Zachtronics.

Bought the physical edition, will look dope with the exapunks and opus Magnum things I have around.
Reactions: undu, d00d3n, fearthedawn and 2 others 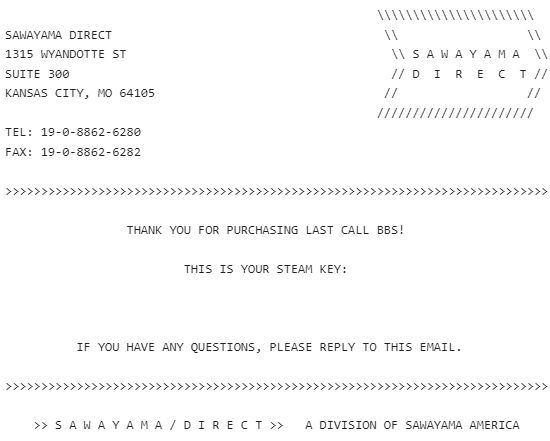 LMAO
The email that they sent me for the steam key is as if it came from the PC manufacturer from Exapunks (and Last Call BBS)
Reactions: undu, C-Dub, d00d3n and 4 others
You must log in or register to reply here.
Share:
Facebook Twitter Reddit Email Link
Top Bottom