Anyone have a Little Nightmares complete with DLC from the Humble Namco bundle? It's the only thing I want from that bundle, just the DLC really. I have heaps of stuff to trade for it.

Anyone want $30 worth of Humble Keys from the past year + Heal COVID-19 Bundle except August of Choice?

WTB Various Steam keys or gift links for these:


For Monies through paypal, I'm US based but I don't know for how much but I'm kind of poor they were all previous Humbley Bumbley Steam games
Send a message or whatever and we can discuss
Thanks etc
Last edited: Jul 21, 2021
Reactions: lashman and FeedMeAStrayCat

FYI it’s currently sale on gamesplanet around 2€. I bought it for first one and when redeemimg it noticed it included the second one as well.

e: when checking SteamDB not sure was it the case or only DLC for the second one I already owned. I just probably assumed wrong, I saw the classic install product dialog after redeeming the key and it showed both games.
Last edited: Sep 27, 2021
Reactions: Blu

There is a Sonic 30th Aniversary Bundle. 10 games for €7 and 13 games for €8. One of the games in the highest tier is Team Sonic Racing. I can buy that game from someone for €4. I don't want to buy the whole bundle because I'm not interested in other Sonic games.

WTS Superman the Complete Animated Series Digital Code for $22,5 (It's the one that got HDified)

WTB from the Nov Humble Choice:

I know it's super unlikely but asking doesn't hurt:

If there's a kind soul who got an Analogue Pocket but noticed it isn't a device for them afterall and doesn't want to scalp the hell out of it, I would buy it at $220-250 and of course also pay for all shipping

It's in the new Humble Bundle

Mafia Definitive Edition from the Jan 2022 Choice (as its the only game I want).

List is too long for trading but I started the Choice/Monthly back in 2016 and have a bunch of keys left over stuff like:

Paypal F&F or buyer pays fees
Reason: User Ganmo made a good point I didn't realize and have removed F13th from the list
Last edited: Jan 15, 2022

WTB from the new Humble Monthly:

The new donation only bundle has World War Z whatever edition, it's the only game I want out of it and I want to buy it but I'm cheap so maybe if someone wants to split a bundle and take everything else or sell a copy? for 3??$ or we can work something out
Let me know

Anyone got Killsquad from the latest HBC. Would like to get one or two copies of it, for 1€ each if possible

Desperados III
The Dark Pictures Anthology: Man of Medan
Just let me know what $$ and we can work out a deal

Ask me about my podcast damn it

Did you copy everything from Era forums?
Reactions: FeedMeAStrayCat and lashman

Ask me about my podcast damn it

Deku said:
Did you copy everything from Era forums?
Click to expand...

just got my steam deck (64gb) email, i have no interest in it anymore, and i'm not sure how it works with sending it elsewhere from my account, but if it's easy, i'm willing to part with my purchase slot for very, very cheap. Apr 28 9:32am (PST) is when i have to complete the purchase by...
Reactions: FeedMeAStrayCat, Mor, Cacher and 1 other person

Thanks! It's in the new capcom humble bundle
Last edited: Jun 11, 2022
Reactions: dummmyy

I know for sure that The Quarry has regional locked activation to EU accounts and since the rest were bought in the EU, through Humble Monthly, I'm guessing they do too.

Or give your best offer, I don't really mind.

Maybe someone has an interest in that no idea, worth a try

Get Mortal Kombat 11, Chivalry 2, Mordhau, and more in our bundle of fighting games, brawlers, and melee sims. Pay what you want & support charity!

WTB Chronicon, it's in that budle I guess tell me what you want for it and I'll let you know if I can afford it, Thanks!

WTS or WTT from Nov bundle & few others (US account)

Anyone got full Humble Choice discount? I'd like to buy Factorio before it gets price increase next week.

I'm saving up for a PC upgrade I've been postponing for years lol. Can also just use some change for life stuff since these probably won't be much for savings.

Does anybody want an Oculus Rift CV1 with 3 trackers? How much would you wanna give + shipping from Greece to wherever you are?

It's in great condition really, the cable has started going bad which is inevitable so if you move a lot it will be flichering occasionally, but I also have a refurbished cable I got straight from Oculus when I told them about this problem and I've still not put it to use since when playing mild games or seated the old cable worked just fine without flickers. I don't have the original box though. I can throw in an active USB extension cable I had for the third sensor.

I love VR but my PC can't keep up with it as it is anyway so yeah.

Edit: frick, just remembered I also lost the little plastic piece that secures the cable on the side of the headset (but you can use whatever to do that job, I used those plastic thingies with the wire inside that are used to close sandwich bread bags or whatever crap) and also on one of the controllers the center bit on the analog stick fell off and I never found it (but the thumb touch sensing still works so I guess it was just decorative/to hide a screw).

Other than that I guess I can part with my Shenmue 1 and 2 originals for Dreamcast. They're both Pal, the paper sleeves housing all the jewel cases have changed color a bit and aren't in the best condition as they're old and one of the jewel cases is a bit broken. The discs should be good I'll check if you want it but can't test it as I don't have a Dreamcast any more, still, they worked last they were played in like 2002 or something.

Can't think of much else I have someone may want.

Boxed PC UT2004 CD version, Icewind Dale with the map and everything, Oblivion, Dragon Age x2 (one still shrink wrapped), Batlefield II (the version that came with a headset but the headset is no more) & 2142, Half-Life 2 (redeemed), Doom 3, all great/mint condition. A bit less good condition for Diablo II, Planescape Torment, Throne of Darkness, these big paper boxes aren't as sturdy. Oh also the cheapest physical Wasteland version from the Kickstarter with the map etc.

Edit: got some boxed Wii games too (again Pal). Metroid Prime 3, No More Heroes, Mad World, Super Mario Galaxy, Battalion Wars 2, De Blob, Wii Fit, Wii Sports Resort, Super Smash Bros Brawl. All should be mint. Can throw in a fine condition Wii and my bad condition controllers (1 Wiimote + nunchuck + Motion Plus + Classic Controller). They just weren't stored, it's not like I was abusing them, so the connections of some pieces have somehow gone bad leading to sticky inputs especially evident with the Motion Plus.. Maybe you can clean and fix them up. I can throw in a couple Sega Handcannons also, one still in box the other also not stored so the plastic handle is all weird with grime it accumulated on its own since it barely saw any use anyway. I can also throw a USB Dolphinbar. The Wii was modded to load games off a portable HDD but the SD card and HDD have since been used for other stuff so you'll have to figure that stuff out yourself than have it ready to go. But yeah it's hackable not some firmware you can't work with if there's any like that.

Also if you recall my troubles with the Retro-Bit Saturn USB pad, the d-pad of which broke internally a little piece of plastic. I have a second one I didn't use so that it wouldn't also break. Maybe you have DYI skills, it's an easy fix for some folks. Or maybe you can get the replacement part they were sending folks without the issue, I almost got them to send it to me after months then they went silent again, fuckers (hence I got my awesome Fighting Commander).

I've got some books in English but you can probably find them locally for cheap.

I can provide pics/vids for whatever anyone is honestly interested in. Gimme your offers. Trades acceptable I guess, if you have random stuff I might want. No clue what that could be, definitely not other boxed games though. Lowball offers if you want, I cba to go all pro seller with taking these to the online markets. Claim your offer is for more stuff than you actually even want if you think they'll help you make back some money if you do know how to sell well, I'd prefer to get rid of things in bulk anyway. Yard sales are not a thing around here. Much of this stuff will probably just be thrown/given away later.

I also have this Star Citizen account with an Avenger ship with the since unavailable (afaik, haven't looked shit up in ages) lifetime insurance LTI if it's sellable: 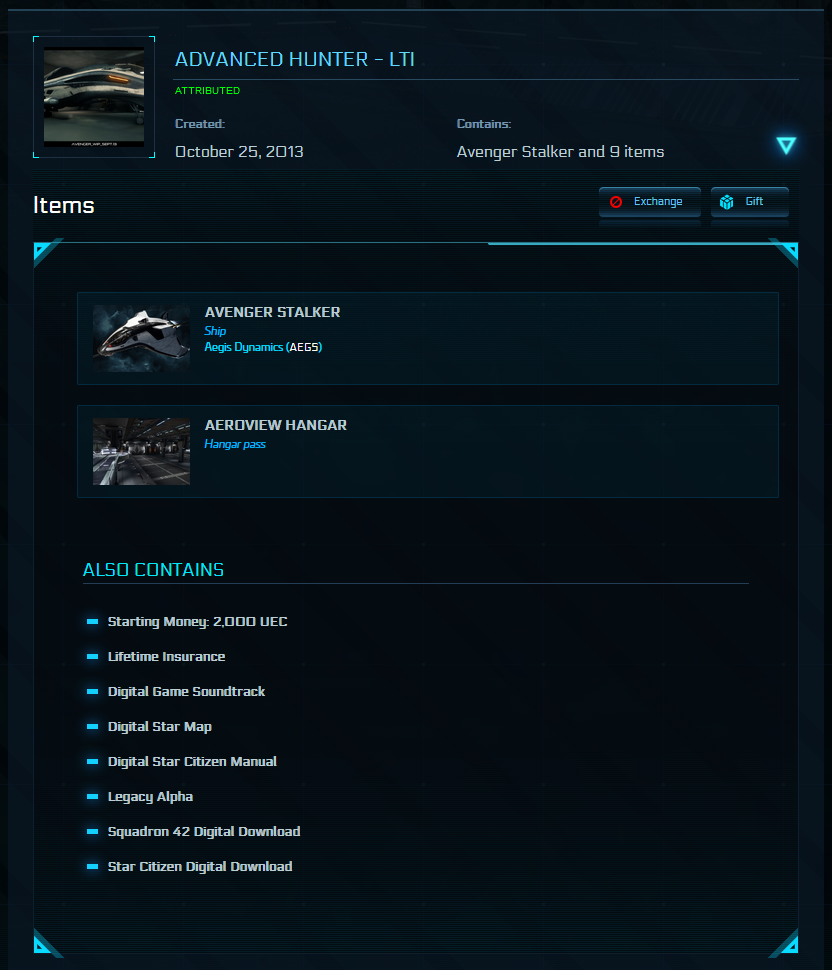 Trying to get a key for friends so me and my buddies can play together
I think all the Humble Bundle keys are World wide but im in the USA just in case
You must log in or register to reply here.
Share:
Facebook Twitter Reddit Email Link
Top Bottom