fantomena said:
Been a landslide outside the capital in Norway in my city. Many people lost their homes and 14 people that are missing. Fuck 2020. 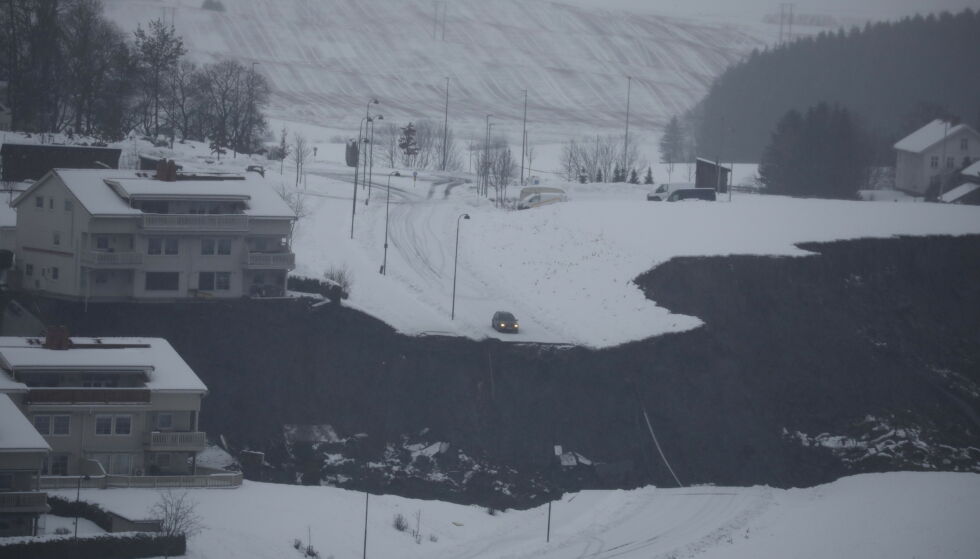 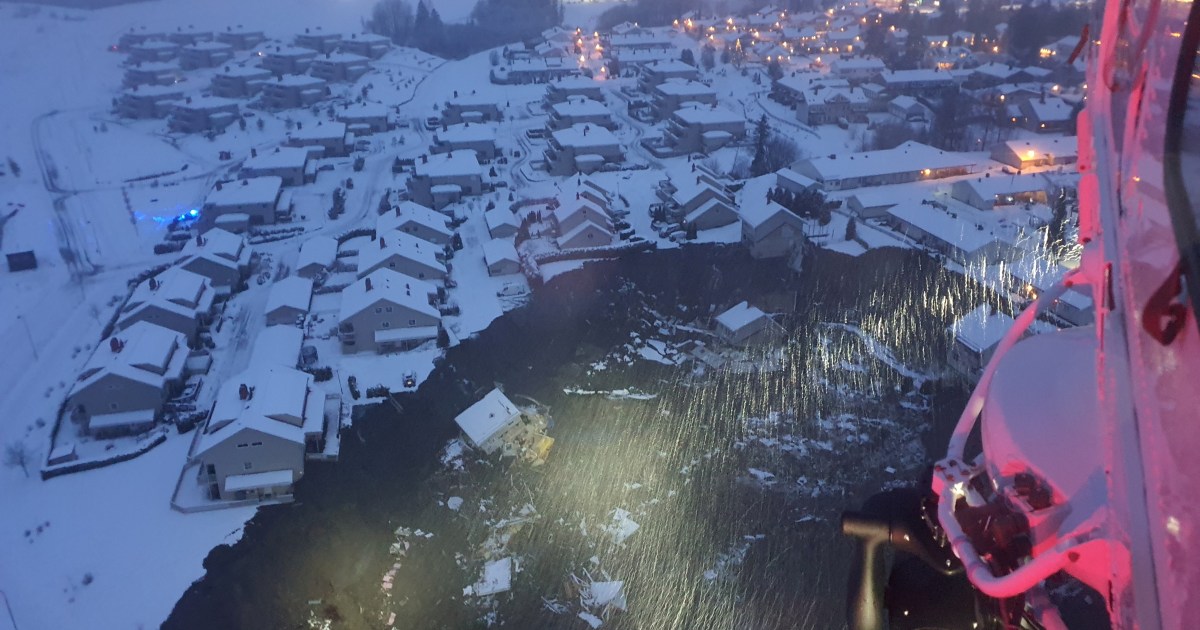 Damn that is huge. Sorry to hear and see that
Last edited: Dec 30, 2020
Reactions: ISee, lashman and Panda Pedinte

Kingdom Hearts on PC or RIOT

Ascheroth said:
I just realized. 2020 is almost over and we still don't have Kingdom Hearts on PC
Square what are you doing unless they surprise release it tomorrow
Click to expand...

I've almost fully given up on Kingdom Hearts coming to PC
Reactions: Tomasety, lashman and Ascheroth

We’ve teamed up with Stardock Software for our newest bundle. Get software like Start10 & DeskScapes. Plus, pay what you want & support charity!

Yes, and I would like to add that I hate the way they appear in a seemingly random order, and last for a different amount of time.
It makes it harder to track the new ones. 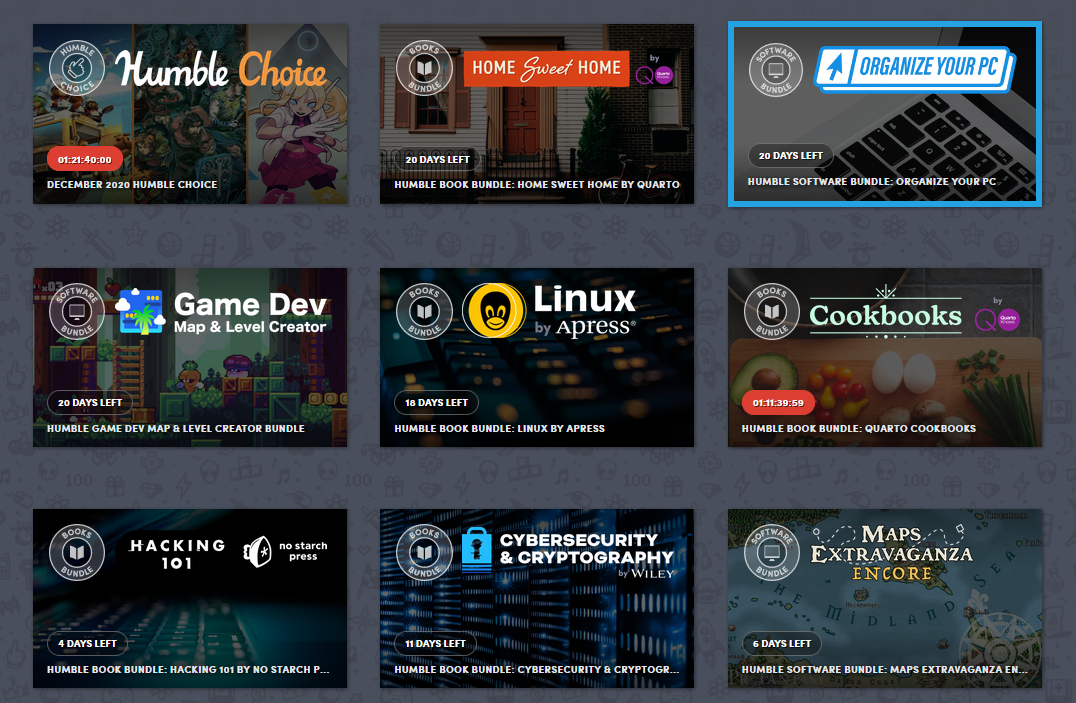 Wok said:
Yes, and I would like to add that I hate the way they appear in a seemingly random order, and last for a different amount of time.
It makes it harder to track the new ones.
Click to expand...

Should be a better way to display the bundles

Saw I wrote "in my city " in my post about landslide. Just wanna say I miswrote, I don't live there (never lived there), so Im tanksfully fine. Really sad for everyone who lost their homes.
Reactions: lashman

We’ve teamed up with Stardock Software for our newest bundle. Get software like Start10 & DeskScapes. Plus, pay what you want & support charity! 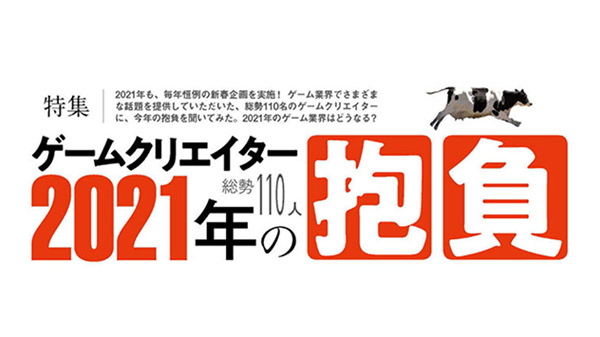 Famitsu has gone up with its end-of-year creator interviews. The website interviewed 110 creators, many of which tease plans for 2021. Get the roundup of newsworthy bits below.

Keywords for 2021: “Release a new title and a remastered title.”

Ambitions for 2021: “For the past two years, I’ve been working as hard as I can with the God Wars development team, which I direct, on the production of new and remastered titles. We’re currently developing three titles, two of which will be announced in 2021. And if possible, we’ll release those two titles as well. It’ll take a bit more time, but please look forward to them.”

What’s New: “The God Wars team is becoming a development studio with quite the number of people. We’ve recently been even more revitalized with the addition of newcomers and veteran developers alike, and the team atmosphere is quite good. We’ll deliver some good stuff with this staff.”
Click to expand...

“We have Azure Striker Gunvolt 3 in the works, as well as three new titles in development, so please look forward to their announcements.”
Click to expand...

“We’re preparing to announce several new titles from Team Ninja in 2021, so please look forward to them!”
Click to expand...

Hopefully with a PC version this time
Reactions: QFNS, Stevey and Jim_Cacher

I feel like playing another classic, so I booted up Chrono Trigger again last night to spend a bit of time with it. I haven't touch it since its release apart from messing around with mods for an hour or two, but after spending about 8 hours with it overall, it seems OK. Well, sort of. For the most part, it contains the improvements from the DS version with a few blemishes:

I'm sure I'll pick up more of these stuff as I progress through the game but for now, it's definitely a better experience, especially with mods. Personally, I used the SNES (Woolsey) translation, Orchestral Music Mod and Chrono's name mod.
Reactions: QFNS, beep boop, lashman and 2 others

Combat mechanics-wise, it's a Slay the Spire clone. So I am pretty excited for it.
Reactions: Avern, sanhora and Tomasety
Added steam250 list New

I actually just finished another game at the almost last minute here for 2020, Manifold Garden. It probably would have been on my top 5 list but still not my GOTY. Didn't expect to get through it today. It's quite brilliantly designed, one of my favorite puzzle games for sure.
Reactions: Avern, Panda Pedinte and ISee

What's everyone's plan for NYE/NYD? Seems like a quiet one in my neighbourhood at least.
Reactions: QFNS, FeedMeAStrayCat, Stone Ocean and 2 others

I'll be staying at home for NYE, can't go anywhere in the UK anyway.

I have finished Spelunky 2 during a daily run:
There is a clear development. I wonder if I will manage to beat World 7 in 2021.

Amzin said:
Manifold Garden. It probably would have been on my top 5 list but still not my GOTY.
Click to expand...

In case you want to edit your top 5, we can talk about it in private messages.
Reactions: FeedMeAStrayCat, BO7AMMOOD, beep boop and 3 others

Not a Persona reference

Vibin and gaming. Probably gonna be on a discord call with some IRL friends
Reactions: dummmyy, kafiend, EdwardTivrusky and 2 others

Picked up MotoGP20 and it's DLC

I'll be watching fireworks from my apartment's rooftop if there is anyone celebrating out there.
Reactions: dummmyy, BO7AMMOOD, kafiend and 4 others

Motorbike Racing games are in my top 5 "Genre's Of Games That I Am Totally Shit At", right next to Footy games.
I can never get the hang of moving my balance point around with the sticks. I've just accepted that i am garbage at them.

Tonight for New Year's Eve i'll be staying in and probably playing games or watching something online. My prep for the New Year is to possibly tidy up and vacuum my room and then get Ring Fit Adventure set up on the downstairs TV. I did food shopping yesterday so i'm ok for the next few days. Kinda boring reallu but given how this year has been i could honestly do without any drama as it would be ramped up to 11 probably.
Last edited: Dec 31, 2020
Reactions: BO7AMMOOD, Stevey, Arsene and 1 other person

According to XboxEra.com forums, rumors are saying Inxile big AAA RPG is in the Steampunk genre and MS is pouring lots of money into it.

Also it seems like almost every Xbox games studio has multiple teams so MS will be firing on all cylinders. Just from Ninja Theory there will be Hellblade 2 the second announced game called Project Amara (I read it was a horror game?).
Reactions: AHA-Lambda and yuraya

Gonna spend it with my wife and son (duh) and some close friends.
Reactions: BO7AMMOOD, kafiend and Kvik

From Cornwall in the UK here and we were in tier 1 right through until December, so had a quiet meal booked for me, the wife and my mum. We will be in tier 3 from midnight so its gone wrong inside a month. As a result for us today the restaurant doing takeaway only. So stay home and act/be normal
Reactions: C-Dub, BO7AMMOOD, EdwardTivrusky and 2 others

My new year's eve is going to be chill, my girlfriend is coming by and said she would feed me African food. for fireworks we'll go to the nearby mountain with a view over Paris and watch the fireworks.
Reactions: C-Dub, ISee, Joe Spangle and 5 others

Thats what i said 6 months ago :v
Reactions: lashman

NYE is looking like a peaceful gaming and sushi time. Cyberpunk/Call of the Sea, I think. Bit of Boundless too. No alcohol, because damn does it wreck my sleep.
Reactions: Li Kao, ISee, BO7AMMOOD and 3 others

I will stay at home with my family, dinner and play Final Fantasy X until I go to bed

no better way of saying hello to 2021 than playing a 20yo game
Reactions: Panda Pedinte, Ascheroth, BO7AMMOOD and 3 others

I hate reading into reviews of a game and them being just jokes or silly references, just let me know how is the game lmao
Reactions: nordschatten, AHA-Lambda, xinek and 5 others

It's now midnight in East Coast Australia. Happy New Year, everyone! Hopefully, 2021 will be a better year for us!

Kvik said:
It's now midnight in East Coast Australia. Happy New Year, everyone! Hopefully, 2021 will be a better year for us!

Happy New Year from Melbourne, Kvik - and to the rest of you when the time comes!

It's a weird NYE for sure. The weather is cold for a summer night. Due to COVID we don't even have a barbeque in the local community centre anymore. And obviously, there's no house party behind my house (they always have one every NYE for the past ~5 years or so).

Yet I can hear the sound of fireworks, so people are celebrating, somewhere.
Reactions: lashman, Jim_Cacher, EdwardTivrusky and 1 other person

I'll probably play something after work and later spend the time with my family. For NYD I'm planning to do some cleaning and maybe play some games.
Reactions: Kvik and EdwardTivrusky

Staying at home for New Year's Eve.
Bought a bunch of sushi for diner and we will watch Tenet.

Was a hard year for everybody, but we nearly made Meta.

Take care you all and "Guten Rutsch, Good slide into into the new year."
(That's what we say over here).

Sigh, someone in Vietnam used my email address to register for an account in League of Legends. Lately my address has been used to register for services I don't want and also someone tried to "recover" my gmail
Is there anything I can do to stop this?
Reactions: ISee, EdwardTivrusky, Pommes and 4 others

I barely missed the low-scorer achievement. It is one of the rarest cheevo, and I did not think that I would get close to it any day soon.

One gets $100,000 by beating the boss. I missed the achievement, because a UFO exploded in one of the levels leading to the boss and I received $450. 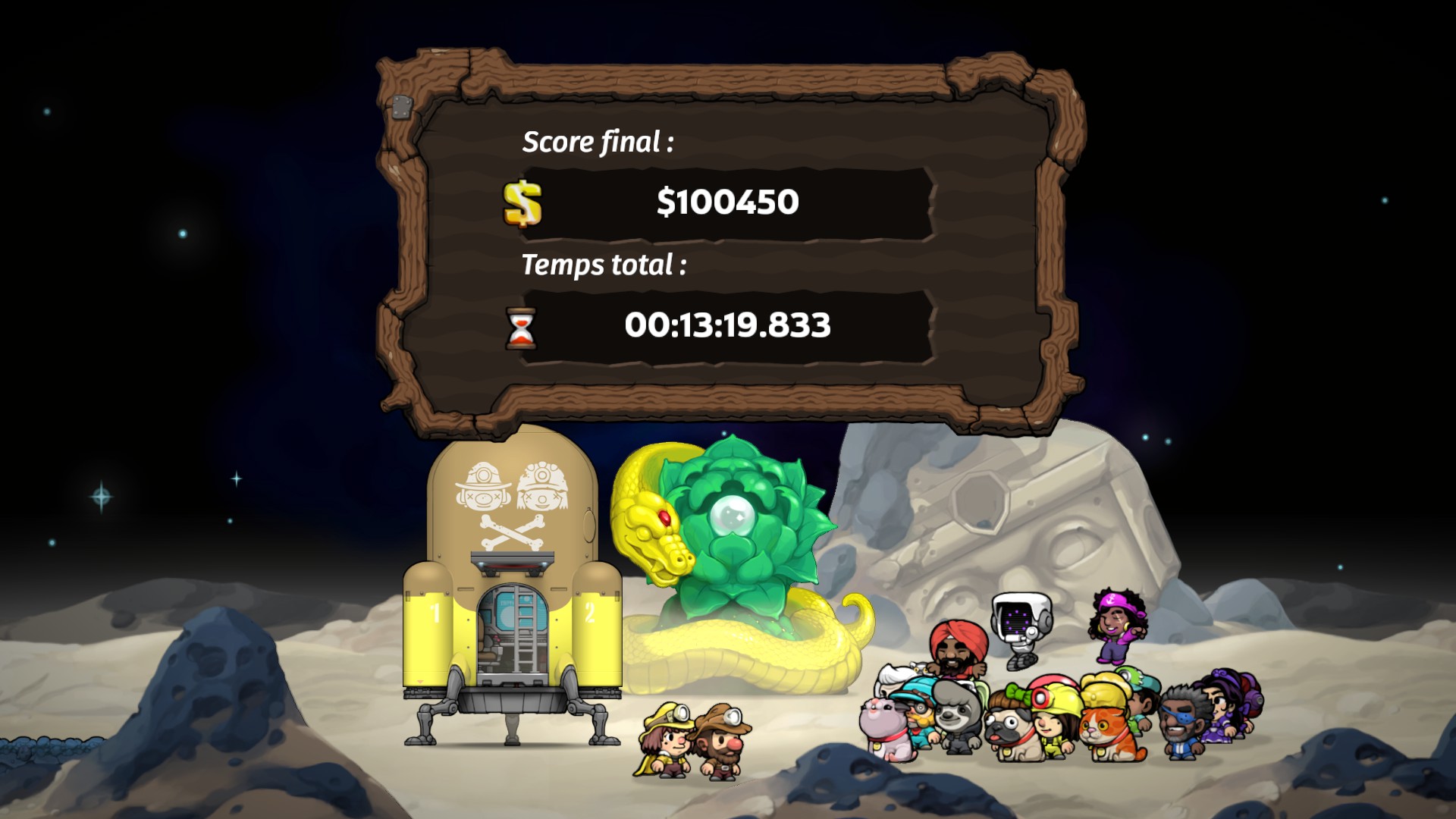 ISee said:
we will watch Tenet.
Click to expand...

I must warn you, the plot is anime as fuck.

More or less a repeat from Christmas Eve. Diner with my mom, too much drinking, headache and insomnia until ungodly hours like 5 or 7 am.
This time I will try to read several comic books while waiting for sleep to come.
Reactions: EdwardTivrusky, kafiend, Joe Spangle and 2 others

Stay home with my parents, have dinner and play videogames.
Reactions: Pommes, Joe Spangle, Jim_Cacher and 2 others

There are some info about Hollow Knight: Silksong there

Two hours to go. Usual day for me. I just played Batman Arkham Aslyum and will sleep before 12.
Last edited: Dec 31, 2020
Reactions: EdwardTivrusky, kafiend, Pommes and 4 others
59 More Posts...