Well, it has happened, as I have been compiling the information week after week since Summer began I thought it would be great to share the thoughts and discussions in one single place once a week.

In this first post you will find a collection that goes from June 21 up to September 6, 11 weeks of top sellers in which you will see a lot of interesting patterns, from MS banking on steam like a monster to Fall Guys taking steam as hostage being the new king of this land (alongside Among Us)

11 weeks of data in this visual style, and from now on every Sunday it will get updated with the correspondent weekly top seller, so, let's begin, shall we?

As you can see nothing too exciting compared to other weeks.

We still have Fall Guys and Among Us as the kings of the moment.
Crusader Kings 3 still strong with 2 places on the top.
Craftopia keeps growing at a slow but steady pace.
Avengers holds up with just 1 position.
Re-reckoning goes in, same as NBA 2K21.

Divinity OS 2 DE comes in again after a good sale.
Reactions: ISee, Yoshi, texhnolyze and 9 others

To me the most interesting thing going on right now is Craftopia. Basically, when you look at the design idea behind that ("take elements from all games we like and make an online multiplayer open world crafting adventure!"), it screams "new companies' first failure".

But it's not failing, neither in sales nor in reception (judging from Steam reviews). I find that fascinating.
Reactions: ISee, FeedMeAStrayCat, Mor and 3 others

For this week I'm not surprised that Fall Guys still is in the top spot and Among Us finally hit #2 as it kept growing past weeks. Like looks these numbers, the top concurrent players was just 14 hours ago 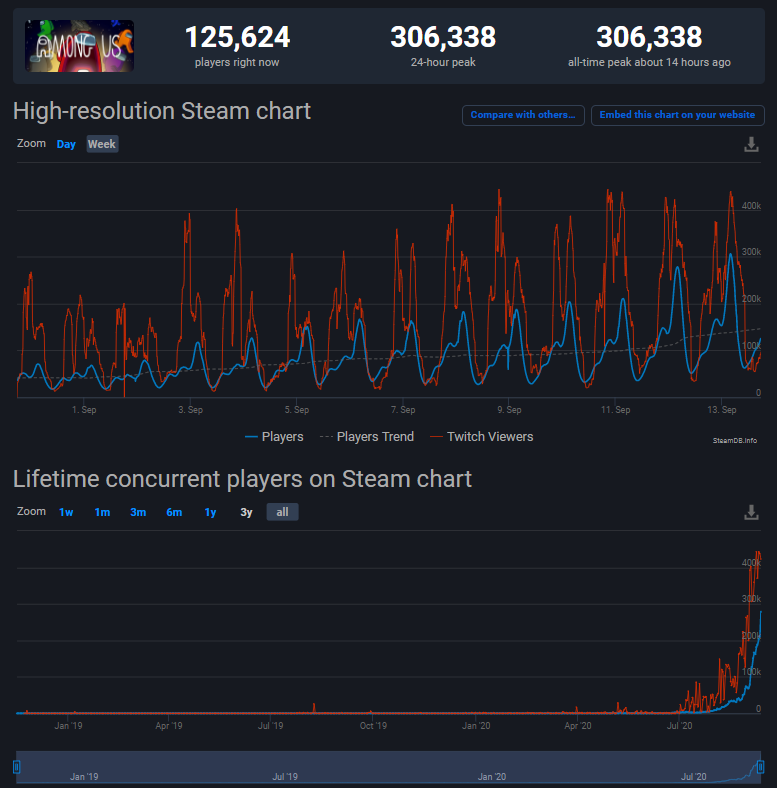 Thank you so much.

Yes, Craftopia right now is a potential juggernaut too, out from nowhere and all the sudden is in the top 10 for 2 straight weeks, the number of players is growing and the review system is indicating that the reception is really good.

About Among Us, well, let's say it's going to be a real challenger for Fall Guys but so far they seem to be fine coexisting which is absolutely amazing, so similar in objectives (having a very good time with friends) and yet both found their own market.
Reactions: FeedMeAStrayCat, Panda Pedinte and lashman

The Among Us train is pretty interesting to watch. Don't have much interest in the game itself, but hells yeah!

And thank you overall for doing this thread and charts and everything Mor . I've always appreciated your work on here and in the Discord, as I'm a bit of a slut for statistics myself

Thank you for enjoying this, it's always great to see new people enjoying the world of data.
Reactions: ISee and FeedMeAStrayCat

Is Avengers a flop?

texhnolyze said:
Is Avengers a flop?

Playtracker Insight estimates it has around 120k owners on Steam. It may have better numbers on consoles.
Reactions: ISee and lashman

texhnolyze said:
Is Avengers a flop?

Panda Pedinte said:
Playtracker Insight estimates it has around 120k owners on Steam. It may have better numbers on consoles.
Click to expand...


Wish there weren't so many redundancies with the same game with different SKUs to get a better idea of different games that are top sellers
Click to expand...

Yeah, I tried to make different versions, one was pretty much a non-duplicates version but I didn't like how it changed the format so I decided to keep the redundancies but with the correct SKUs
Reactions: FeedMeAStrayCat
OP

After 6 weeks in a row, Among Us gets the first place and dethrones Fall Guys as the new king of the week, will it hold there? who knows but it seems like the battle has just get started.

Index kit is back as new stock comes in, this is a very usual thing that happens from time to time.

Crusader Kings 3 still holding quite well with 2 places on the list which is kind of impressive.

Sea of Thieves comes back after 6 weeks out, all thanks to the pirate sale.

Medieval Dynasty is something new and well, quite welcome to see new blood in the top sellers.

Hades comes in again with the release of 1.0

Conan got a new DLC which make it come back too.

Craftopia is holding quite nice and the numbers are really great.


Among Us is becoming a new Juggernaut, here's a comparison between Fall Guys and Among Us in their own projections, and as you can see, this is really interesting.

Fall Guys it's getting steady while Among Us is in the peak of popularity, how will it evolve? we will have to wait and see.

Isn't among us like 4€? How many copies is the game selling
Reactions: Pommes

I look at that list and realized that PCGMR is actually very casual.
OP

A good chunk of millions


Phoenix RISING said:
I look at that list and realized that PCGMR is actually very casual.
Click to expand...

So like, we're all talking about buying 3080s and ray tracing, but the most popular games don't even need a 970 to run, lol.
Reactions: FeedMeAStrayCat, nordschatten and Mor

The biggest surprises for me this week were Conan Exiles and Medieval Dysnaty.

What is interesting about Among Us is it's also available for free on mobile devices so besides PC they may or may not be also making some money with the mobile crowd.
Reactions: lashman

You mixed Fall Guys with Among Us as this last one isn't on consoles.

Mor said:
You mixed Fall Guys with Among Us as this last one isn't on consoles.
Click to expand...

This week is way more interesting, let's see what happened in this last 7 days

Among us is the new king of the place, the hot topic right now and as king it holds the first place again.

Fall Guys is selling less than last week and as so Index reclaims the second place and F.G falls to the third place, bronze for you, my bean.

Hades is the real winner of this week, from seventh place to fourth and keeps selling really well, game is out of Early Access and as so it keeps selling, reception it's getting is really good.

Mafia: Definitive edition enters in fifth position and while it's a really great number (and the CCU peak it did was stunning with over 36k players) I feel like the game won't be featured next week but we will see.

Medieval Destiny holds the sixth position in the chart, still don't know about this game but seems to be selling really well.

Nier Automata re-enters the top after god know how many time with a seventh position, this is due to the TGS sale event and I'm sure the replicant announcement had something to do too.

No Man's Sky re-entered due to the Origins expansion and a little sale, it will be out next week (happened before in July)

Red Dead Redemption 2 is on sale and well, it's back in ninth position.

And Cyberpunk 2077 had another City Wire stream this week and while the last ones didn't make it enter the top 10, the closer we get to the release, the higher it will get.

And that's it for this week, what do you think? any comments? share your thoughts in here.
Reactions: Pommes, FeedMeAStrayCat, Jim_Cacher and 3 others

Hades is doing phenominally well. It peaked at around 37k concurrent players on Steam alone, which is more than the other three Supergiant games combined. (Bastion peaked at ~4k, Transistor peaked at ~6.7k and Pyre peaked at 4k). Of course that isn't the fairest comparison since Steam was much smaller when those games came out. As of yesterday, it was also the #2 game on the Nintendo eshop overall charts, behind Mario 3D All Stars.
You can't also forget the dozens of sales on EGS.
Reactions: FeedMeAStrayCat, Mor and Panda Pedinte

Not surprised by Among Us staying in first place, that boom was so big the developers decided to stop working in the sequel and will bring all the sequel content to it.

I think Fall Guys will still lose some positions until the start of the new season.

About NMS the trailer for the new expansion was pretty cool and seems to bring a lot of content. They also have an interesting strategy as every time a new content update is released they put it on sale.

RDR2 and Mafia remake are not surprises as people like open world games but I don't think we will see them again in the next week.

The biggest surprises for me still is Medieval Dynasty as it kept #6 spot.
Reactions: FeedMeAStrayCat and Mor

where did goose game end up? i guess most people that wanted to play it already had it by this point but i'm still a little surprised it didn't end up a top seller for even one week.

warp_ said:
where did goose game end up? i guess most people that wanted to play it already had it by this point but i'm still a little surprised it didn't end up a top seller for even one week.
Click to expand...

Currently it is #25 in the Global top sellers list. Unfortunatelly I can't say how it performed on the launch day.
Reactions: warp_

Panda Pedinte said:
Unfortunatelly I can't say how it performed on the launch day.
Click to expand...

It got a banner, so it probably did okay.
Reactions: warp_ and Panda Pedinte
OP

warp_ said:
where did goose game end up? i guess most people that wanted to play it already had it by this point but i'm still a little surprised it didn't end up a top seller for even one week.
Click to expand...

While it didn't sold that much right now (It's a party game which had it's moment last year) if we take a look at the CCU peak we can see it did well with almost 2k players last week.

Number of reviews is also high so that gives us an idea of how it is doing well enough, right now it must have sold around 50k copies

So yeah, don't think it's selling at a bad pace, plus, what curi0usBystander said, it got a main page banner for 24 hours, that helped a lot too.
Reactions: curi0usBystander, warp_ and Panda Pedinte
You must log in or register to reply here.
Share:
Vk Ok Blogger Linked In Diaspora Weibo Facebook Twitter Reddit Telegram Viber Skype Email Google Yahoo Evernote Xing Link