I'm absolutely not ok with him being out.
But it has been non stop crying for 30 minutes.

I feel so fucking betrayed by him, our love is not enough. I can understand, and my reaction is not logical, but I'm horribly tired by that turn of event. Don't know what to think or do.
Reactions: lashman

Li Kao said:
I'm absolutely not ok with him being out.
But it has been non stop crying for 30 minutes.

I feel so fucking betrayed by him, our love is not enough. I can understand, and my reaction is not logical, but I'm horribly tired by that turn of event. Don't know what to think or do.
Click to expand...

As I asked above, did you get him sterilized? If not, I think this is around the time when he should be getting his first heat and him wanting to go out is completely normal (and yet one more reason why you shouldn't let him)
Reactions: Li Kao

He was sterilized at the end of September.
I'm numb, just refreshing Meta and Nvidia by reflex. How could I play or do anything right now.
Reactions: lashman

Li Kao said:
He was sterilized at the end of September.
Click to expand...

Then I guess he's just one of those cats... he'll probably get used to it with time. If you really want maybe you could walk him outside yourself from time to time with a harness?

Don't take it as a sign of how much he loves you though, different cats have just different attitudes.
Reactions: lashman

What worked with ours cat when he wanted to go outside was trying to get his attention with toys or playing with him. Nowadays he just hangs around the house or watch the street from the balcony.

I'm sure the kitty must love you so don't feel bad about it.
Reactions: BlindRhythm, Li Kao and lashman

Li Kao just noticed you already said it was neutered a few posts above. Sorry I missed all that, I don't really visit this topic often.
Reactions: Li Kao and lashman

Third Time !
Jump from the windows to the entrance small patio, had to get a chair to retrieve him, growled at me.

Fourth Time !
When getting the chair back he sneakily got out again.

Hesitating between crying and saying fuck that cat. I will take a nap, and he can go fuck himself.
I'm broken.
Reactions: lashman

Li Kao said:
Jump from the windows to the entrance small patio, had to get a chair to retrieve him, growled at me.
Click to expand...

Not sure if it's doable "architecturally", but you could get a cat safety net to allow him outside on the window and balcony avoiding that.
Reactions: BlindRhythm

Just passed the time since my last post outside. Watching my cat fighting successively with 3-4 others. Extending my hand to him only to be shown his teeth and growling.
...
Can he get some semi heat even if sterilized, if it’s recent ?

Not even sure he doesn’t have a little bobo on the nose. I’m super tired at life, my mother is tired, and I have no idea how to handle him tomorrow (nothing will be opened today).

edit. It goes without saying but thanks to everyone for your support.
Reactions: BlindRhythm, lashman and Panda Pedinte

Li Kao said:
Can he get some semi heat even if sterilized, if it’s recent ?
Click to expand...

Some cats can keep those behaviors for a while but it's frankly a bit weird considering he was neutered so young. My advice is to not let him out at all if you don't want to, the more you let him out, the more he'll accept that as the normality, and he won't stop asking to be let out. Maybe get a window hammock, so he can look outside from behind the window and if you don't have a mosquito net, get one, or get a cat safety net to prevent him from escaping.

Him hissing at you while he was fighting with other cats is completely normal.
Reactions: Panda Pedinte, lashman, BlindRhythm and 1 other person

A cat that managed to get out will continue to do so again for a length of time afterwards. I've found that male cats are also far more vocal about it as you've experienced. They're inherently curious creatures.

It won't be easy trying to keep him in now especially if you leave windows open. I use something like these so that I can keep windows open and still allow air to flow through.

I've talked before how two of mine are mother and son but never explained how. One of the windows in my house broke, never figured out how, and Mitsy escaped. She was gone for months and I would only catch her out of the corner of my eye some days when I was outside. Having been an indoor kitty her whole life she didn't really have the proper instincts to hunt so while she did well enough to survive somewhat, it would have ultimately killed her. One day after coming home from the store I thought I kept hearing something crying underneath my porch so I checked.. it was Mitsy. She was incredibly skinny and frightened but still let me crawl under and grab her.

She eventually put weight back on and not long after came the surprise of her giving birth to kittens. Two of which I gave away and Rocky was the one I kept due to his condition and the chance he wouldn't survive longer than a year.

But getting back to your little one, aggressive tendencies can continue for a couple months even after being neutered. Only roughly half of all cats neutered will have those tendencies stop immediately.

Also the hissing and aggression toward you is because he's hurt and scared after those fights but here's the thing, he's still coming home to you, right? That's because he feels safe and loved there. Pets stick with us through our worst and best times and theirs as well though showing or even internally holding animosity for your kitty will only cause him to second guess those feelings.

I understand being frustrated and tired but keep showing him love and attention. Again he's wanting out because he's curious, not because he wants to get away from you. Try your best to keep him inside and with time he'll stop trying to get out. It can take months. Francis knows what I'm talking about as I gave him advice with the one he rescued and took in.
Reactions: warp_, Li Kao, FrancisWM and 2 others

He is sleeping between my legs and all is fine in the world.
I’m terrified about tomorrow.
Reactions: Panda Pedinte, Pommes, lashman and 1 other person

Morning was semi bad when I was alone, some lamentations but nothing too big.
Then my mother got up and he knows full well who he is asking to go out.

15-20 minutes of crying, then I moved a furniture for him to look outside in the kitchen and a chair in the living room.
Played some time with a mouse tied to a stick and now chasing a ball.

It works, kitty is not crying, but that's high maintenance
It feels so much better hearing him playing with the ball than crying, it's a start.

edit - I really have to buy a cat tree and maybe windows hammocks, but where the fuck am I to put all this shit in our tiny apartment.
He already has a tunnel he never use because it's in another room and he prefers to be with us. I swear, my living room was already far too nerdy with all the tech stuff, but it will become kitty wonderland too if this continue.
Reactions: Pommes and lashman

Yeah, just to let you know, he is out. Non stop crying.
I have to work on my emotions, but I guess it's what he wants.
Reactions: Pommes and lashman

I don't want to cannibalize the thread, but...
Today was so good. Some light lamentations but barely any, he was content with his admittedly shitty Cat TV installation and barely asked out.
I don't dare hope this is the new normal. Did he finally get tired of being dunked on by stray cats twice his size, please please please.

Oh, I also moved his tunnel in the main room, he doesn't use it if it's where we don't go often. Room is messed up bad, but on the other hand kitty is IN.
I have to buy a real tree ASAP, but where the hell am I to put it in the room in the state it's in is a mystery.
Reactions: ISee, Pommes, dummmyy and 1 other person 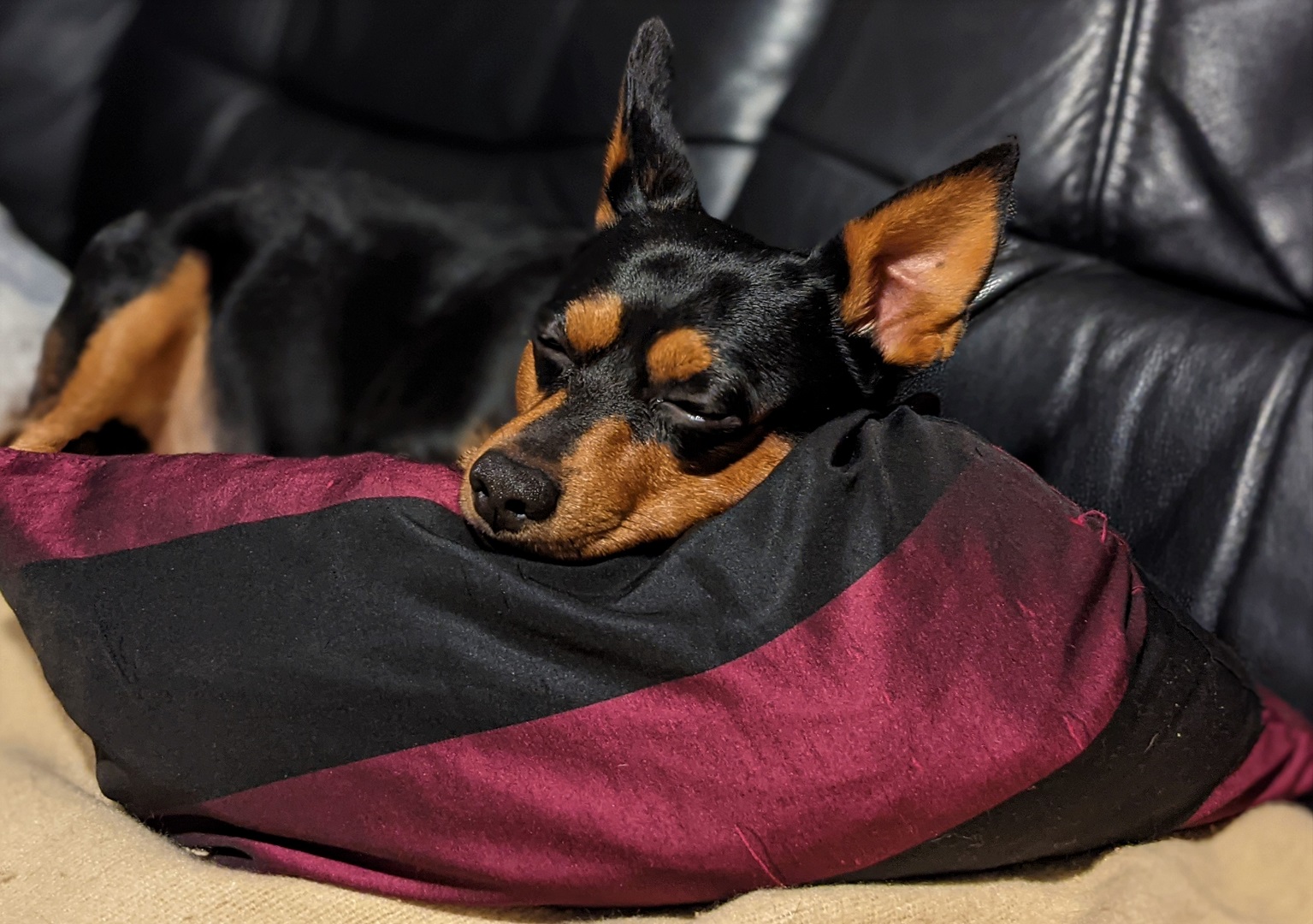 too cute!
Reactions: BlindRhythm and ISee

Guess who thought it was a good idea to sit over my keyboards? 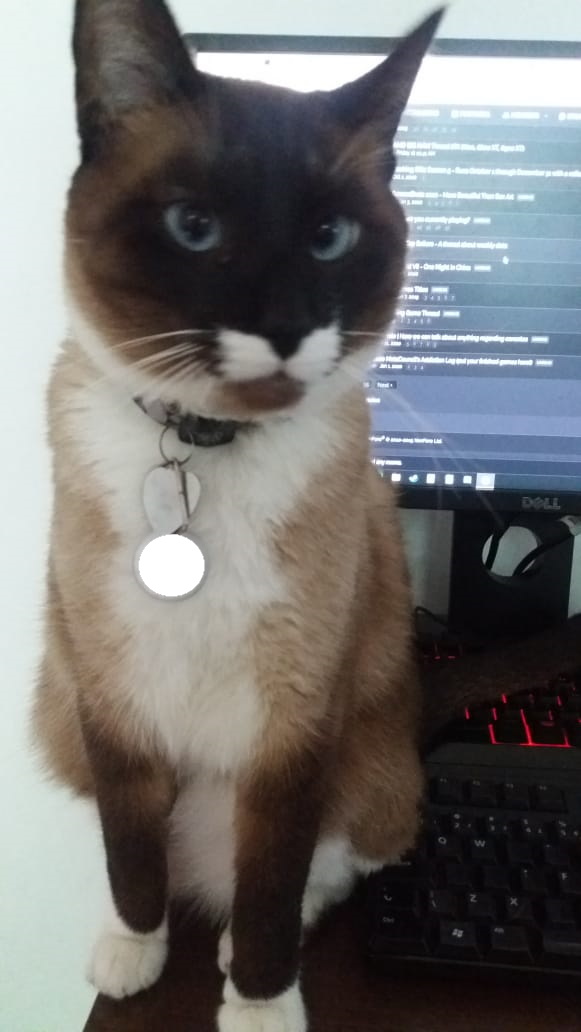 Reactions: warp_, ISee, BlindRhythm and 3 others

Panda Pedinte said:
Guess who thought it was a good idea to sit over my keyboards?
Click to expand...

not your keyboards anymore
Reactions: ISee, BlindRhythm and Panda Pedinte

lashman said:
not your keyboards anymore
Click to expand...

If he wants to sit over I don't see a problem he just need to do my all work .
Reactions: ISee, BlindRhythm and lashman

Panda Pedinte said:
If he wants to sit over I don't see a problem he just need to do my all work .
Click to expand...

It has been said that I should post more pictures of my cat, and I aim to please !


I think he likes me

I would like to put pictures where he doesn't sleep, but, it's an activity he shows great interest in. That and biting. He is a cat of simple pleasures.
Reactions: EdwardTivrusky, Pommes, ISee and 2 others

Li Kao said:
I think he likes me
Click to expand...