Community What are you currently playing?

Somehow never got around to this before, believe it or not

I intend to change that. Same for the rest of the series. Fairly chill so far

I know Fallout 3 rightly gets a lot of stick for various things, but I really enjoyed exploring the map
Reactions: teezzy

Finished the Part 1 - Penal Colony of Resident Evil Revelations 2 yesterday,
It was alright! Claire and Moira's part was quite good and interesting. Barry and what's-her-name's part was a bit more boring, since it was more of a retread of the exact same areas with more enemies present.

Still, the part was short and sweet.
Reactions: nordschatten

Finished with Danmaku Unlimited 3 but in a way where I ended up taking the easy way out of completing it since the game gave me that option.

Now playing The King of Fighters '98 on Switch.

Man, Fallout 3 is pretty on Ultra

This has aged very well
Reactions: Stevey, xxr and lashman

Finished with The King of Fighters '98.

I'm currently juggling Oblivion, Subnautica Below Zero and I was playing Warcraft 3 Reforged until I realised the hard way that it doesn't have cloud saves
Reactions: Rogue Agent and lashman 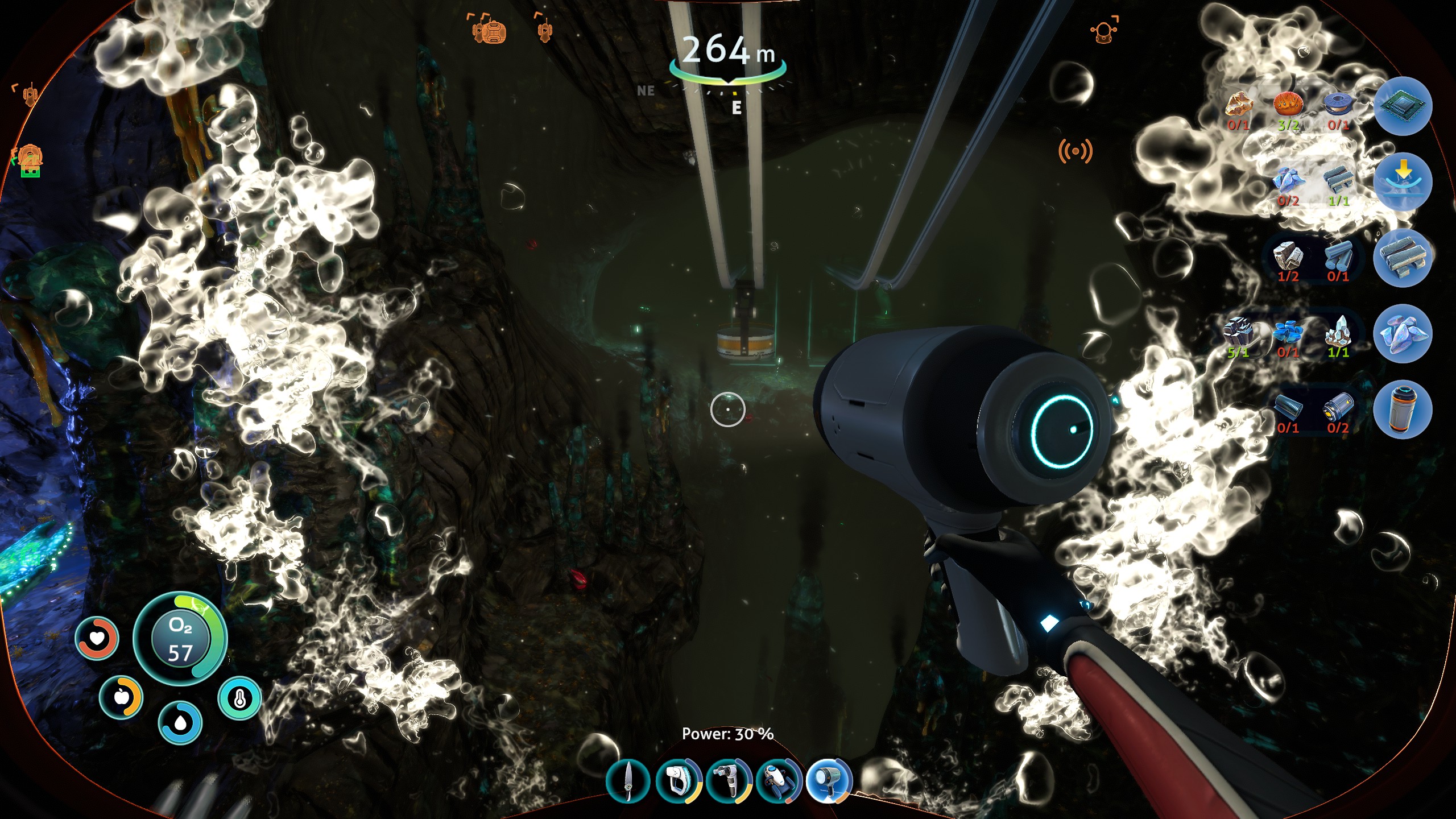 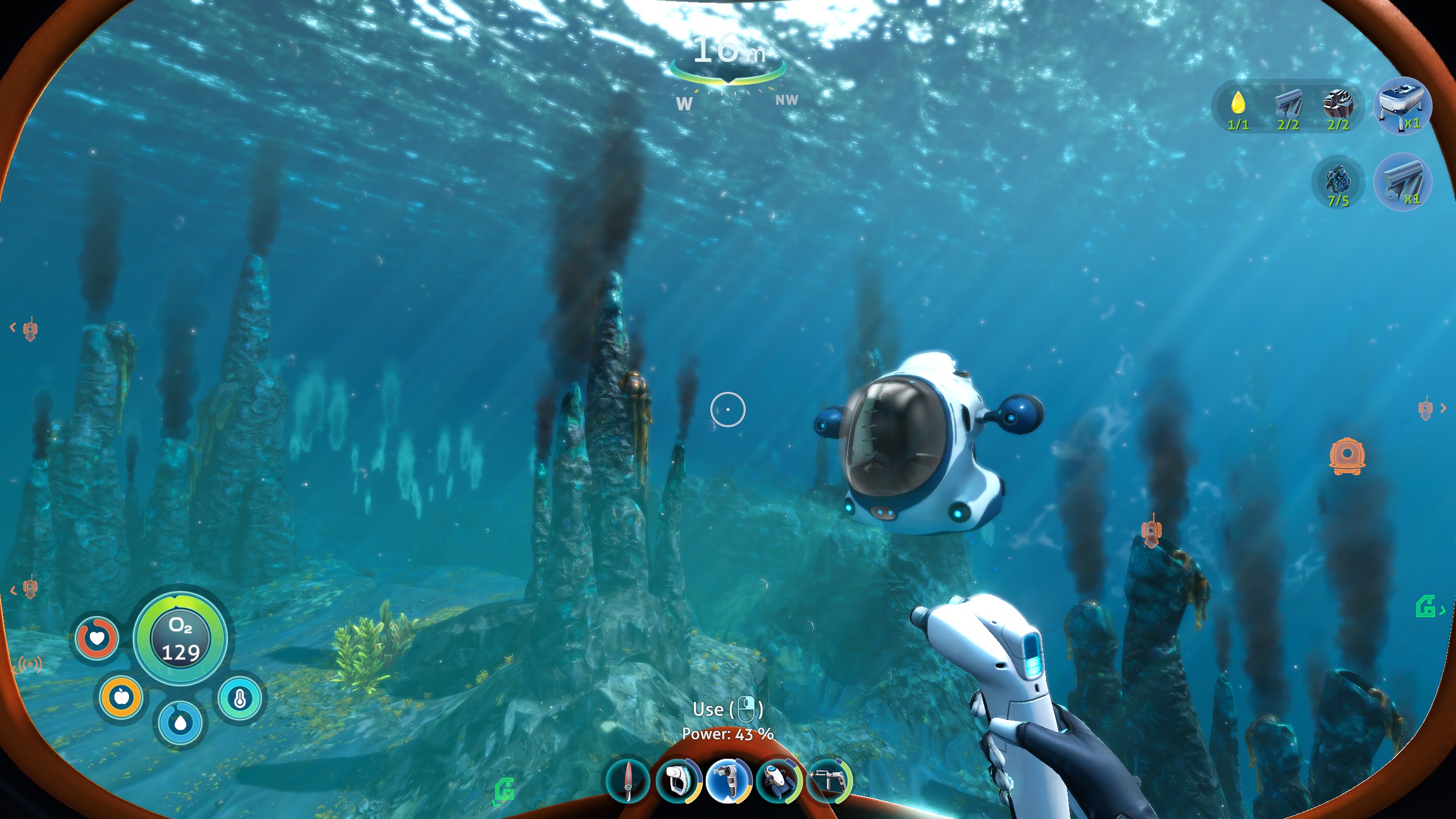 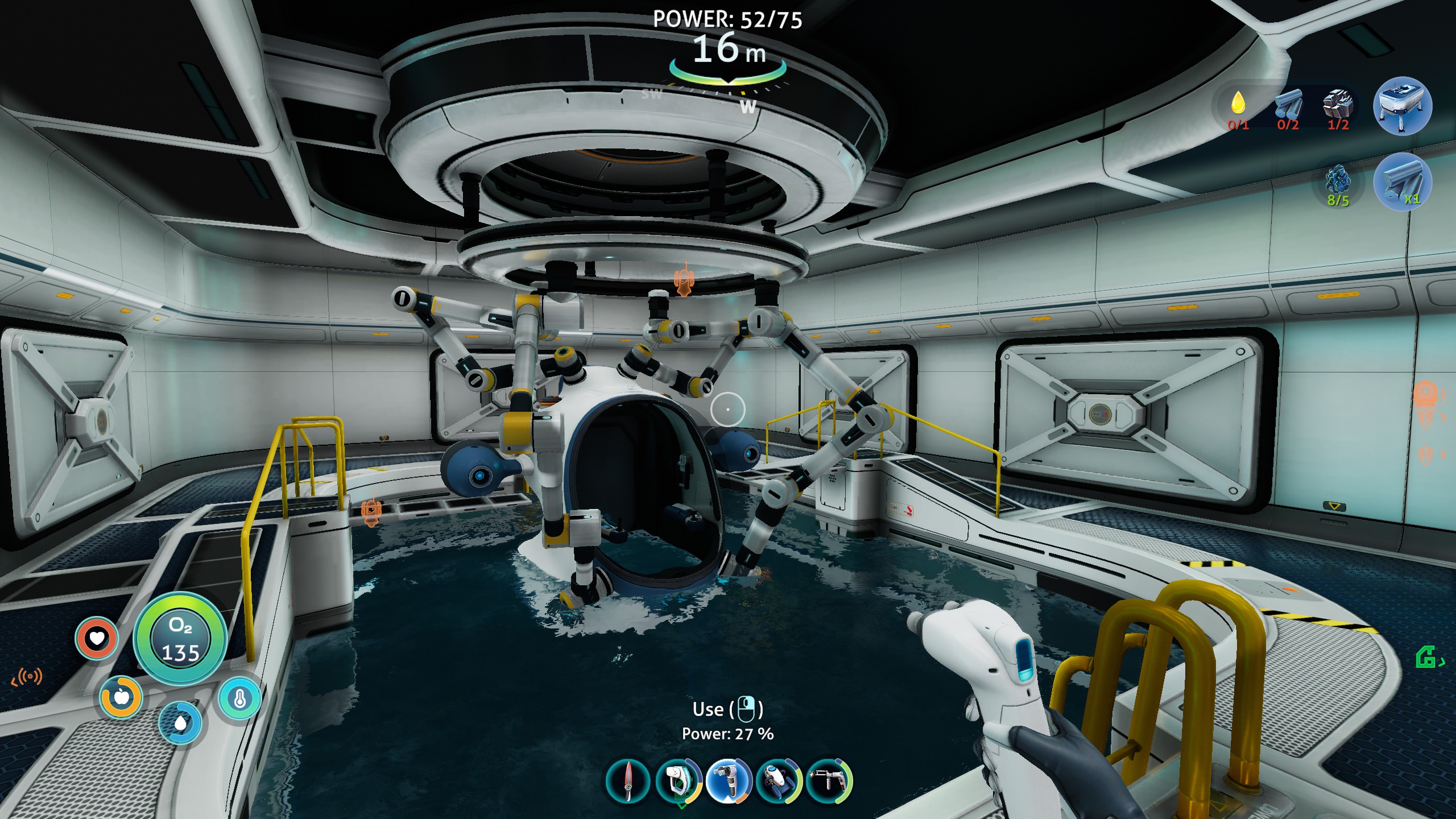 Probably going to chill before Rift Apart, but I may return to WD Legion and try to finish it.
Reactions: Stevey

Probably going to chill before Rift Apart, but I may return to WD Legion and try to finish it.
Click to expand...

I literally just finished Days Gone, too. Watched the secret endings on YT.

Always wanted to give Homefront: The Revolution a try, mainly because it runs on the CryEngine. So yeah, that's up next for me.

Edit: If anyone reading this is interested, Homefront is 80% off on Steam right now until the weekend is over:
Reactions: Stevey, lashman and Lashley


I am enjoying JC3 and Iris a lot. Both are really good games in their genre. JC3 is a huge improvement to 2, and Iris is a flesh take on the deckbuilding genre. Meanwhile, I rarely disappoint by games but Blue Reflection is truly disappointing. The story, characters and combat are all let-down, and the only saving grace is the music. I will play it to the end (very likely grab all achievements as they are fairly easy to do), but it is leaving a bad taste in my mouth.

After finishing the above, I am thinking to start the following. Depending on E3 and Summer Sale, the list will probably change.

Cacher said:
and the only saving grace is the music
Click to expand...

I still play the music while working. It's amazing. I read some of the composers also worked on Ryza.

Shame the game was not great. Having a magical girl + a Yuri game is very rare (outside visual novels)
Reactions: Cacher

MegaApple said:
I still play the music while working. It's amazing. I read some of the composers also worked on Ryza.

Shame the game was not great. Having a magical girl + a Yuri game is very rare (outside visual novels)
Click to expand...

Yeah, the premise is rare to find and I honestly expected so much more as the main story is wrote by the author of Kino's Journey. The game turns out to be an easy RPG with no real sense of threats and full of highschool girls' mundane problems. It's such a waste of potential.

The two games I am mainly focussing on now are Valheim and FFXIV (working through Stormblood using a Dancer). These are the games I play while online with friends and probably take most of my time.

Outside of them I rotate through 3 games to wind down. Dorfromantik (absolutely love this game), Townscaper (bit of a stretch to call it a game, more of a toy really but still cool) and Tetris Effect (tetris is my no 1 GOAT and has been since I first played it back on the C64).

I played some demos:


Retro-styled action RPG with an interesting scenario and somewhat off-beat writing (to give you an idea: The player character's own puke is a usable resource).

The demo now also features the single-player mode that was missing from previous versions of the demo and it looks like this game really works best as a co-op game (unless you really enjoy challenges like using platforming to type out words really slowly). Too bad, I had that game on my radar for well over a year because it's really cute and well designed, but everyone looking for some fresh casual coop game, make sure to take a look!

Let's see here: Fictional (but plausible) rural Oregon town? Setting in the recent-ish past? Focus on story-telling through dialog? When I saw the trailer for this during the PC Gaming Show, I thought I received DONTNOD and Firewatch vibes, but after playing the demo, it turns out this game is really dedicated to being comfy first and foremost. Now I might be wrong here, but it really seems that this game is purely escapist fiction that lets the player experience a fantasy of slowing down, reconnecting with old friends and possibly even rural romance, all accompanied by a soundtrack of licensed country music songs (I could not help notice that the selection does not bother to be historically accurate to the game's being set in 1986 however, and will happily play you some 2019 Malena Stark on the in-game radio station). I might let all of this slide and enjoy it as purely therapeutic (god knows I'm indulging in escapist fantasies wrt my RL job often enough) if the presentation were on the level of a Tell Me Why, but it's not, not even close. This story might have been better off as a visual novel.

Speaking of visual novels: Here's one, and it also is meant to be comfy. It literally says so in the game's extended store description. It's about a Kitsune that travels to Wellington, NZL as a stowaway on a plane and given the developer's track record (for instance, Highway Blossoms, reviewed on Metacouncil's Rate-the-game-you-finished/retired thread here), you can be reasonably sure she will make some new (girl-)friends - and possibly find the elusive woman that started her enchanted life. Presentation and writing are certainly towards the top-end of the VN spectrum, but do not expect huge literary ambitions.

A gorgeous side-scrolling action-platformer. This game goes all out at throwing hugely ambitious art direction at a classic genre - you won't find any pixelated retro-aesthetics here, instead you will feel like you are somehow playing a full-color non-serial sci-fi graphic novel. Highly recommend to check this out if you are even a little bit into the genre.

And while we are at games that look like graphic novels: Ever wished you could play a Moebius graphic novel? Your wish has come true. How similar am I talking here? 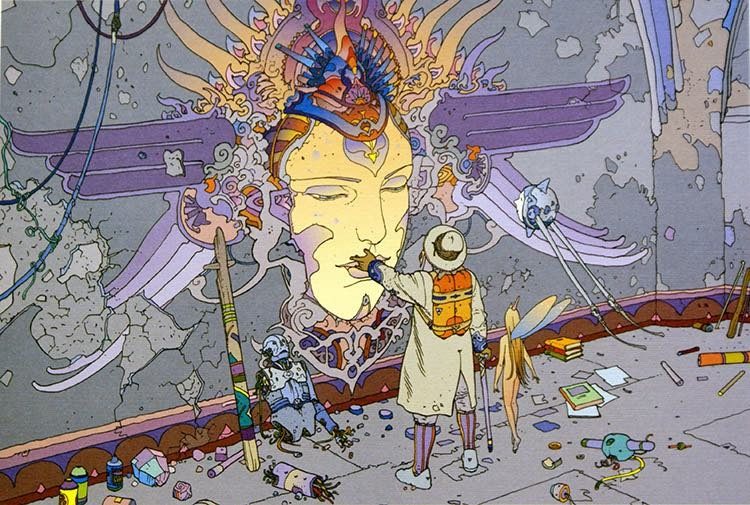 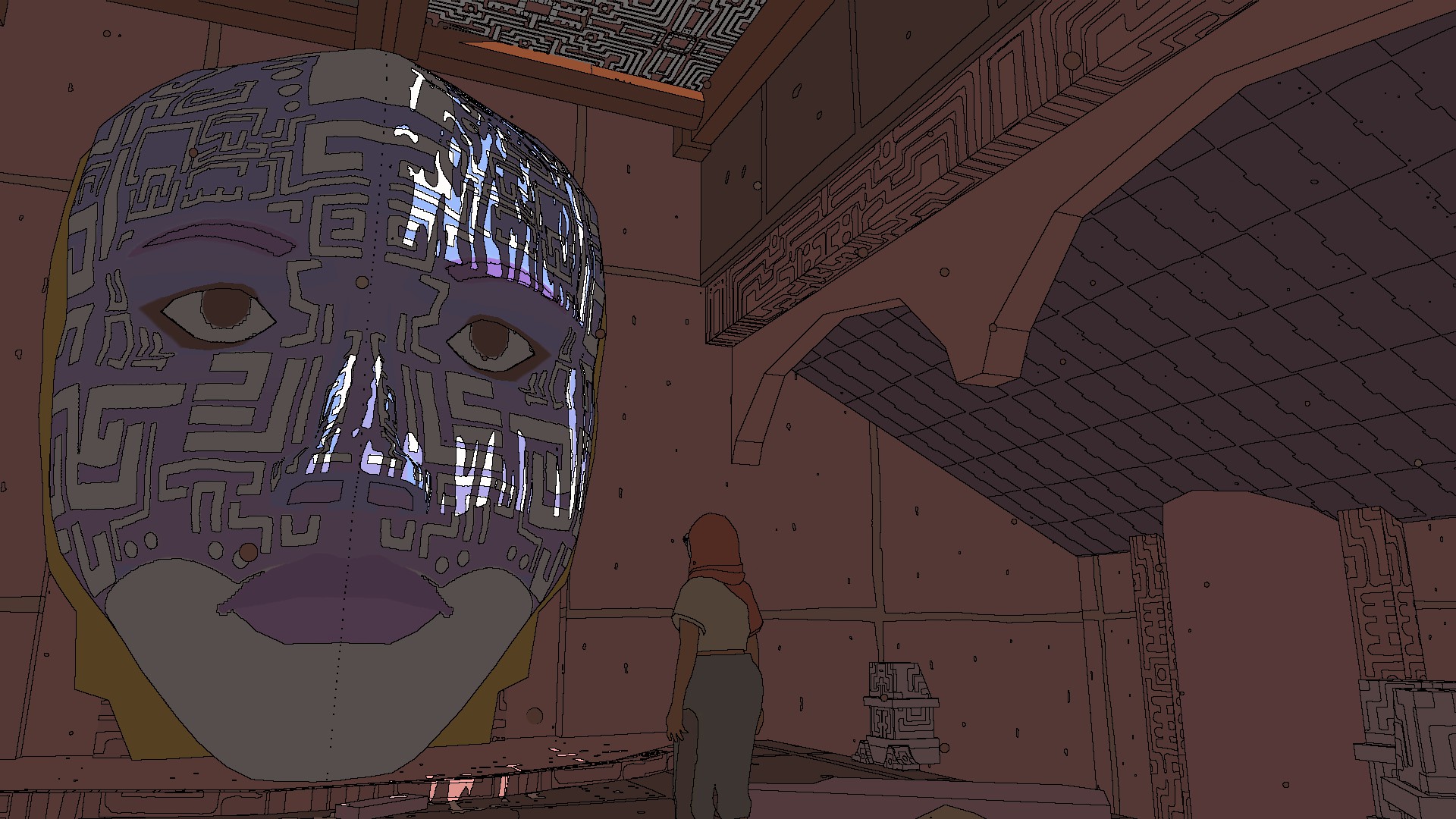 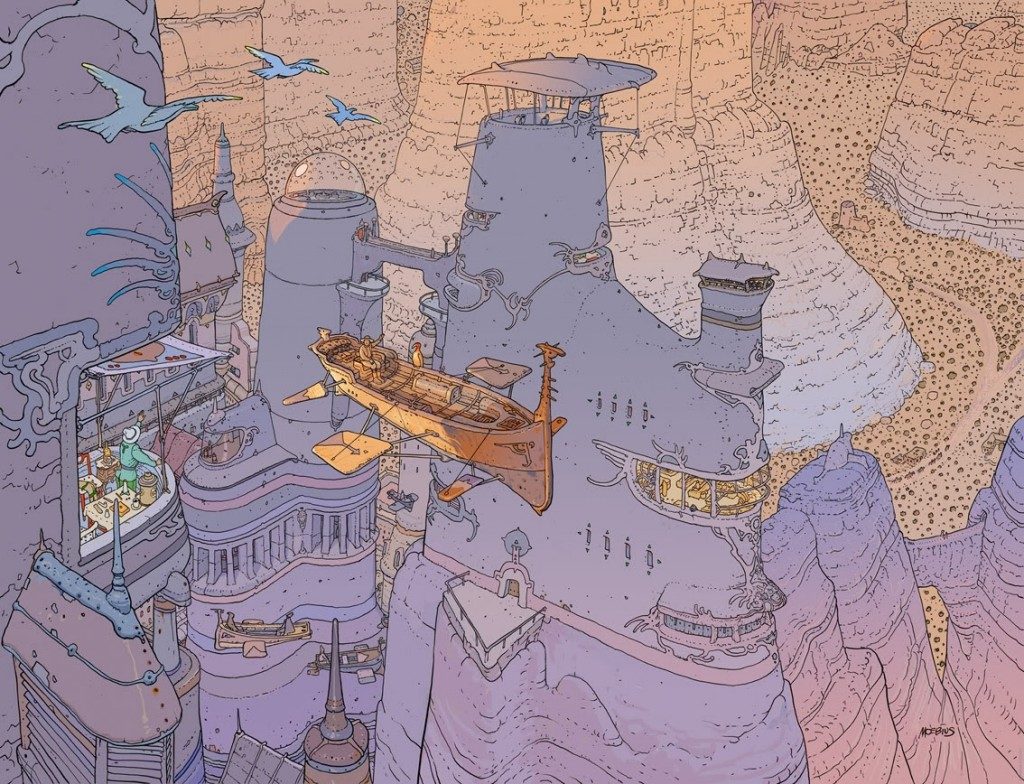 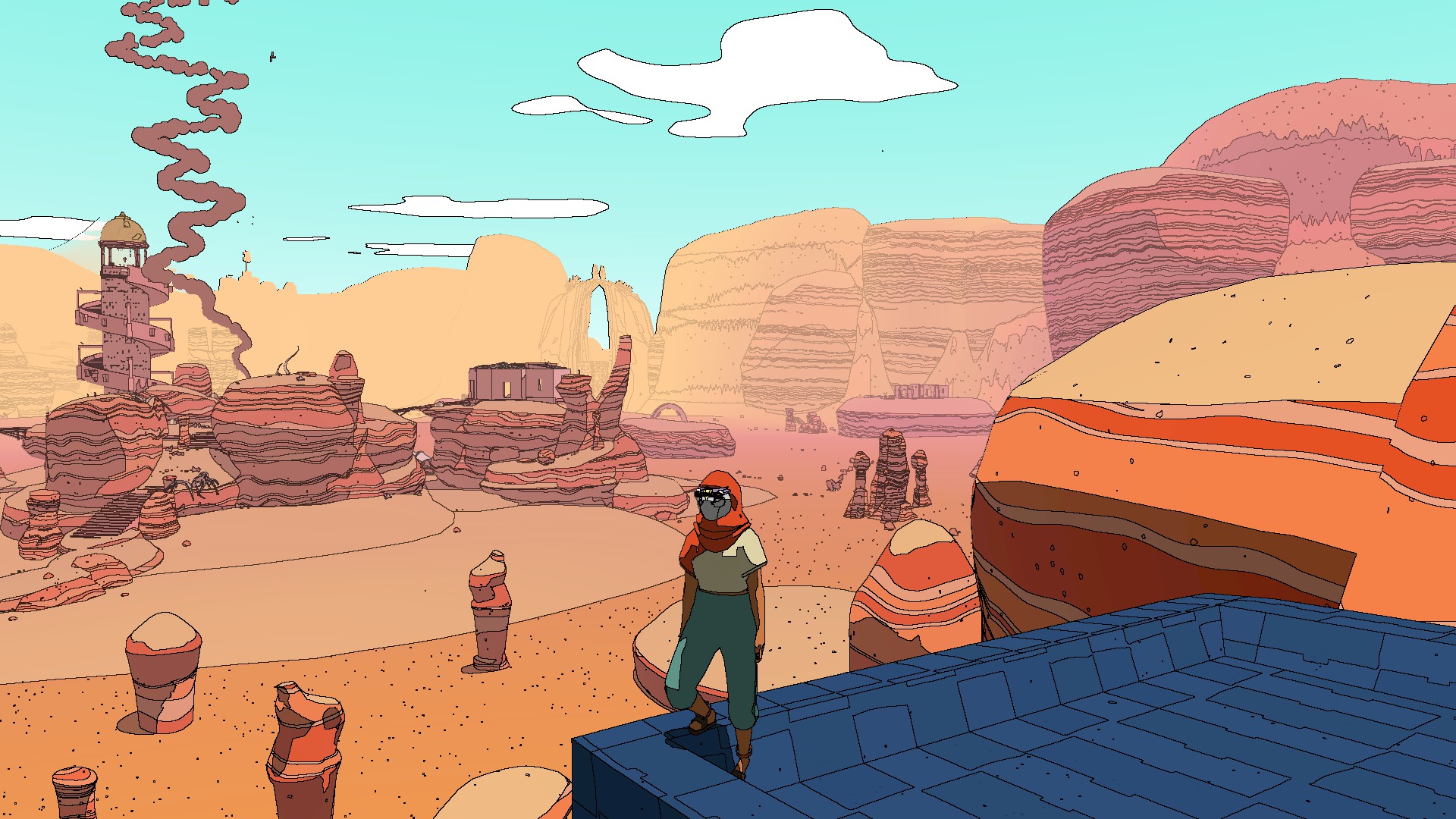 Now, with looks like these, I am quite inclined to let certain flaws slide when it comes to mechanics and gameplay, but the demo (which is basically the game's whole extended tutorial area and missions) really could give you the impression that the game fully intends to skate by on looks alone. Only towards the very end of the demo does the game feel like something of an action-rpg rather than a, dare-I-say-it, supercomfy RPG-lite like Eastshade.

KeyWe is off my wishlist now, the rest of these games will remain on there, but I think Lake and Please Be Happy will only convert into a purchase some time down the road once a really good deal comes along. Death Trash plays nicely and seems interesting, but I am going to wait and see what times show up on Howlongtobeat - this kind of game I can really only have fun with if they can be completed in less than 10 hours. Sable and They Always Run are pretty much guaranteed to end up in my library sooner or later.
Reactions: Cacher, Angelo, C-Dub and 3 others

Cacher said:
After finishing the above, I am thinking to start the following. Depending on E3 and Summer Sale, the list will probably change.

It turns out the next-to-play list was changed to the following post-E3:
Returning to Mario + Rabbids Kingdom Battle after the sequel announcement. Not sure why I stopped playing last time, but this game is still as good as I remembered. Just beat World 3 boss and return to World 2 to complete challenge levels, then I will move on to World 4. I plan to play the coop campaign solo after completing all the main story, challenge and secret levels, before jumping into the Dongkey Kong DLC. So there is still a lot of game left and I am excited to go through them in the next month.

Meanwhile, as I will be beating Blue Reflection very soon, Deadly Premonition will be my next game. Heard a lot of praise towards SWERY's games so very excited to finally start playing it.
Reactions: Li Kao

I'm almost done with Mass Effect 3. Been enjoying my time back in the Mass Effect universe.
Reactions: lashman 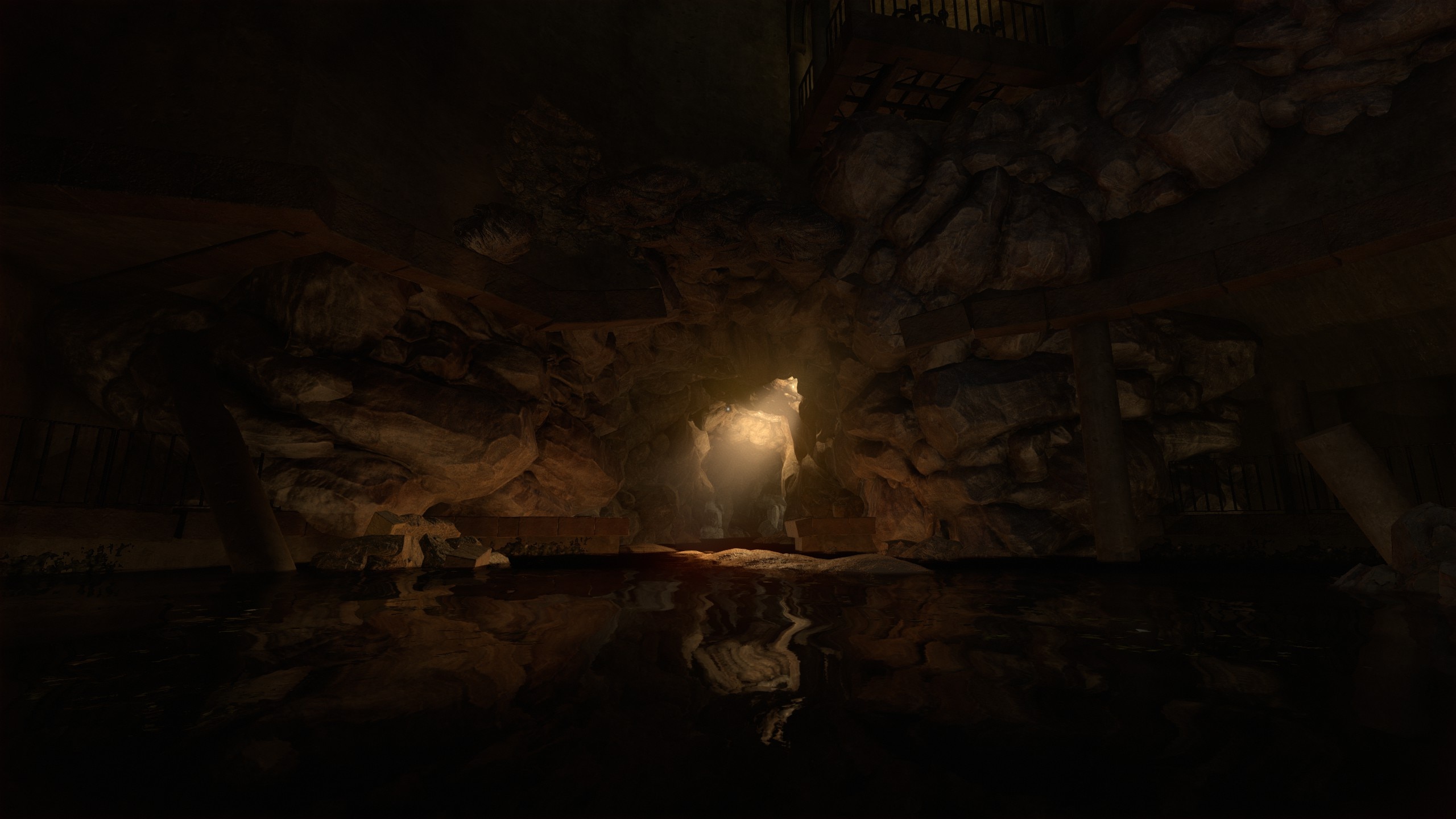 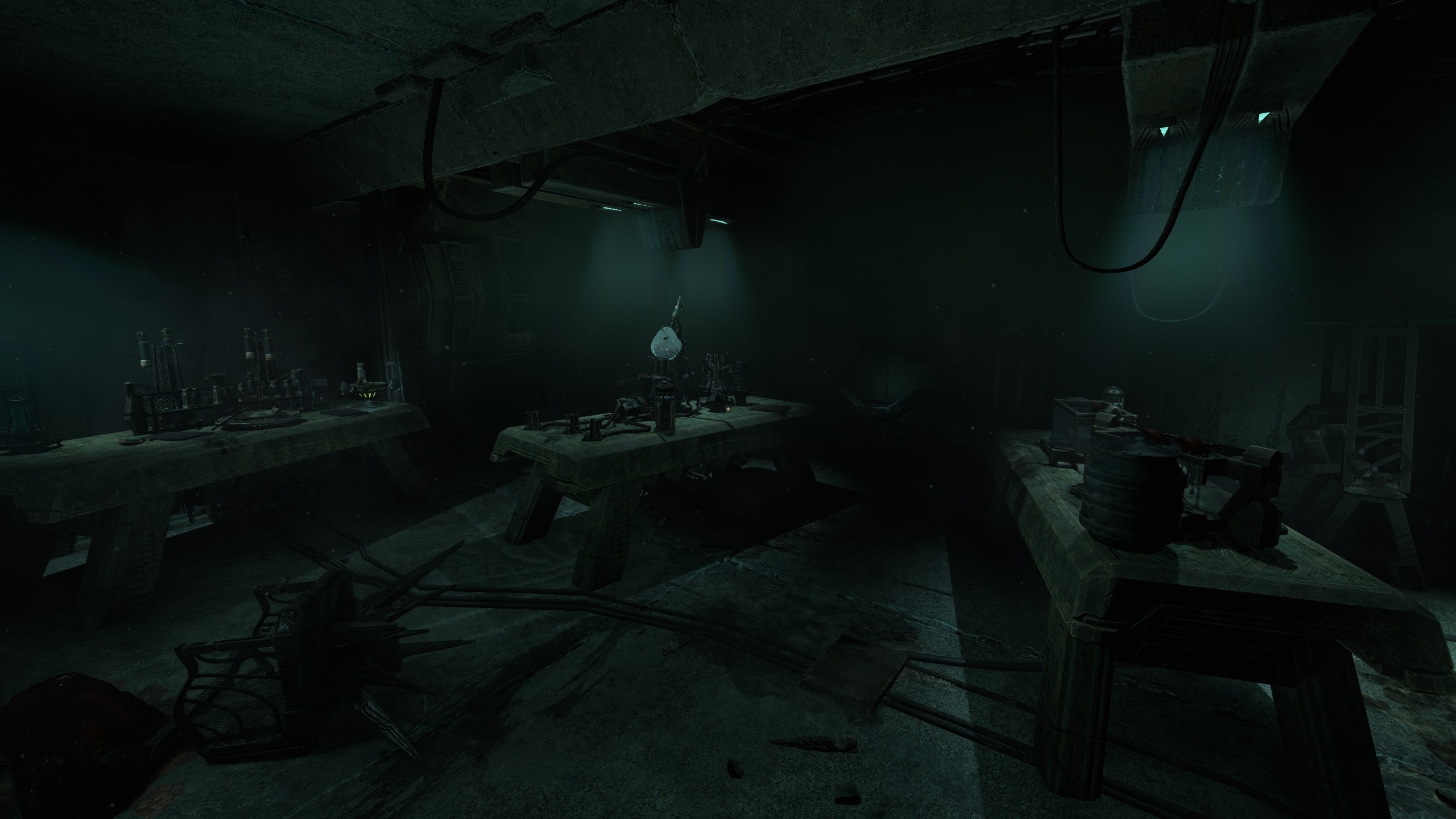 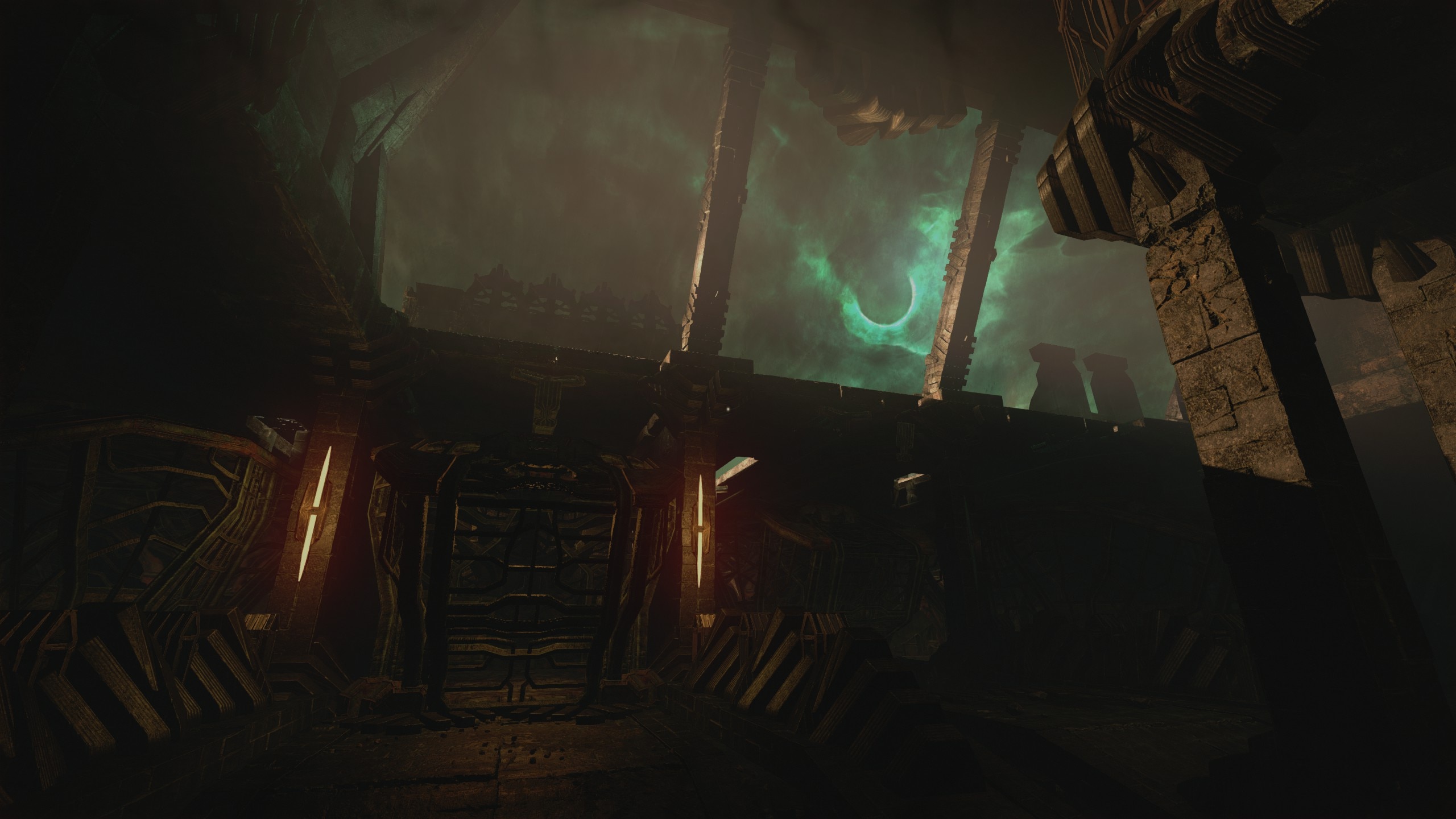